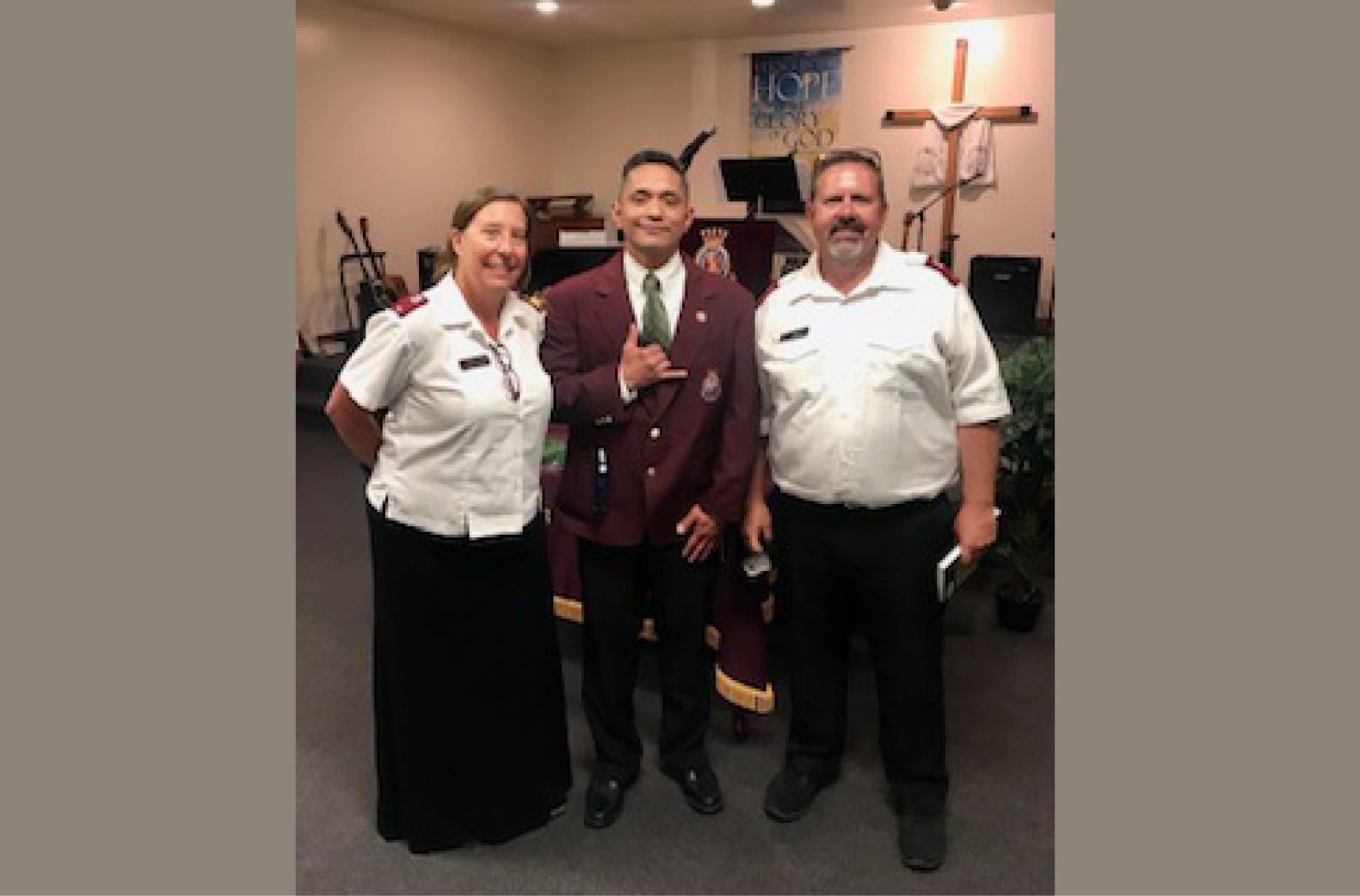 Finding the words through recovery: One journey that inspires many

“I fell in love with a place that I felt saved my life,” David Duenas said when reflecting on his time spent at The Salvation Army’s Adult Rehabilitation Center (ARC) in San Jose, California.

There, he received counseling, work therapy and spiritual guidance to help regain control over his life. While at the ARC, Duenas wrote a poem titled “My Favorite Number” that was read aloud during his graduation ceremony on April 21.

My Favorite Number by David Duenas

The sun has set. Another day is gone. I lay on my bed wondering where I went wrong.

How did this happen? I asked in my head. I thought it was over, but it happened again.

This time it was worse. I gave up all hope. I went to war with the bottle, the weed and the dope.

I lost all faith. My joy slipped away. I forgot what’s important, I forgot how to pray.

I relied on possessions, my job and the girls. All things considered, I was living fine in this world.

Until the day arrived, I finally came to. I was able to see clearly. All the lies and the truths.

The truth is, I’ve given up on this world. On myself, on my family, even my precious baby girl.

The feelings of guilt drive me to drink harder. I put aside everything, even my rights as a father.

I wanted it back. I pondered in dread. But I picked up the bottle and drank harder instead.

But now I’m here with yet another chance. I’m looking at myself deeper, not just at a glance.

I can finally see clearly. My emotions are in check. I’m filled with God’s grace from my feet to my neck.

My head’s bursting with recovery, with joy, I’m serene. These days have been happy, y’all know what I mean.

Upon entering the facility, Duenas said there was an initial three-day quarantine period required due to the ongoing COVID-19 pandemic. “I wasn’t allowed to interact with anybody,” Duenas said. “So, I asked for a notepad and started writing…I started writing it all down.”

In high school, Duenas was awarded for his writing in a poetry competition, which he said was “right before [he] went to jail and found recovery” for the first time. Duenas, now 38, said he first realized he had a problem with substance abuse at 18, following his release from jail.

When reflecting on his first days of isolation at the center, Duenas said he had a “false sense of pride” because he stayed sober for 10 years in the past. “I thought I was going to be able to control my drinking and my using. When I found out that I couldn’t… I was really disappointed in myself because I knew better,” he said. “It took me a long time to realize that the world’s not out to get me.”

Duenas called the program an “eye-opener.” He explained, “to wake up one day and realize that you’ve been slowly killing yourself while having fun…destroying your family and all the friendships you have…that’s kind of a shocker.”

In 2017, Duenas said he admitted he had a problem, reached out for help, and entered an ARC program. “I went there and I wasn’t ready. I left after 22 days,” he said. With all the rules and restrictions put on beneficiaries, Duenas said, completing a six-month program can be daunting. However, this time after four days he said could feel God’s presence back in his life. “I made this commitment to myself, to God,” he said. By writing, Duenas said he “started feeling OK,” in his recovery. “Like, I’m not gonna die today.”

As a 12-step program, beneficiaries are required to go through each step “to learn more about themselves,” said Major Dan Williams, Administrator for Business at the San Jose ARC. During the process of completing the steps, writing assignments are given for self-reflection, Williams said. For David, “writing helped him to put into words what he was going through.”

“It’s funny, [David] says ‘Major, you guys have helped me so much,’ and it’s like, ‘we just gave you the avenue. We gave you the opportunities,’ it was his decision to make that relationship with God, to make that connection with the Army—it was his choice to do that. It’s the free will that God gives us to do that and he chose to make that change,” Williams said.

Finding community is important to many of the men Williams said he sees go through the program. Graduates who stay connected with The Salvation Army, or other rehabilitation programs like Narcotics and Alcoholics Anonymous, seem to succeed outside the program more than others, he said. “It’s belonging to something. We all long to belong somewhere and with The Salvation Army, no matter where [beneficiaries] leave to, there’s a place for them to go,” he said.

Since graduating, Duenas has been able to spend more time with his 11-year-old daughter, Brynn. Even bringing her to volunteer with him, Lieutenant Gina Noble, of The Salvation Army’s Silicon Valley Santa Clara Citadel said. “It’s all about if you want to help yourself, help someone else. He’s modeling that for his daughter,” Noble said.

Noble met Duenas during last year’s Red Kettle campaign where she and her husband, Lieutenant Chris Noble, would drive ARC volunteers to bell-ringing locations in the area. “That’s how we got to know David,” she said. “He would share things about his daughter, he would ask us a ton of questions about the Bible,” mentioning how David completed reading the entire Bible during his time at the center.

Due to COVID-19 restrictions, on the night of the graduation ceremony, the Nobles were some of the few audience members allowed in the chapel to hear Duenas’ poem. Gina Noble said she admired Duenas’ ability to help people understand how the journey of substance abuse looks, from his perspective. “It hit me because I think anyone can connect with that. Even if you’ve never dealt with addiction personally, you can see the journey in that poem,” she said.

Today, David stays connected to the San Jose ARC by teaching a class to current beneficiaries seeking help for substance abuse. After completing a discipleship course led by the Nobles, Duenas decided to become an adherent of his local Salvation Army Corps in Monterey. However, someday he said he hopes to become a soldier of the Army so that he can continue in the fight to help others in need.

“I don’t have to live up to the world’s expectations. I just have to be right with God and with myself and to continue to try to lift people up,” Duenas said.