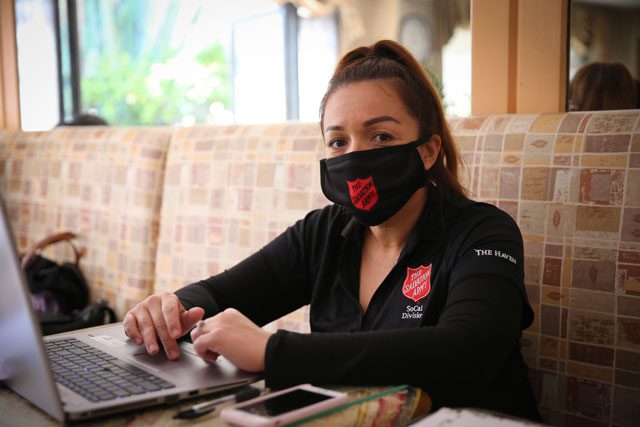 Even with stimulus checks in hand, need compounds for many American families

The Salvation Army is seeing a surge in first-time clients, but the increase in demand for its services could persist well beyond the shutdown.

A sharply dressed father pulled into the parking lot of The Salvation Army in Boise, Idaho, his family in tow. He got in the food pantry line, and rolled down his window.

“We’ve never done this before. What do we need to do?”

Stacy Lawrence, the corps’ volunteer coordinator, assured him they’d be able to help and that the process was simple and straightforward. When the last box of food was put in the car, he looked at Lawrence and asked, “How can I pay you guys back?”

In communities across the country, The Salvation Army is seeing new faces—people who’ve never asked for help before but are now finding themselves in uncharted territory.

Over 80 million taxpayers have already received their stimulus checks. However, it could be months before all payments have been distributed, and there’s still no clear timetable for getting the world turned back on and the labor force back up and running.

Yet, as the COVID-19 pandemic pushes the U.S. economy deeper into a recession, it’s becoming clear that no stimulus check will address the underlying issue: millions of working Americans were living paycheck to paycheck well before the virus was on anyone’s radar. Even amid the longest economic expansion in modern U.S. history and the lowest unemployment rate in 50 years, many households were quietly in crisis mode.

In that sense, the COVID-19 pandemic hasn’t created the most vulnerable members of society as much as it’s exposed the level of their vulnerability.

“Coronavirus has hit vulnerable populations harder,” said Amanda Ponzar, Chief Communications and Strategy Officer for Community Health Charities, which represents over 2,000 nonprofit partners nationwide to raise awareness about health insurance, unemployment insurance, food banks, mental health support and other basic needs. “They can’t work from home, or they’re losing their jobs with no savings, or forced to work on the frontlines more at risk…but many nonprofits are struggling right now too—so it’s going to be hard to get out in front of all of the needs.”

The Salvation Army’s presence is needed, as much as ever, despite the financial lifeline many families are getting via the Economic Impact Payment.

“We’ve literally had hundreds of first-time clients in the last 30 days through our school district and regular social services office,” said Captain Harold Laubach, Modesto (California) Corps Officer. “On average, we distribute approximately 800 food boxes per month, and we had more than 800 in our first week of April.”

Lt. David Vargas, Corps Officer in Monterey, California, which just secured funding to provide rental assistance, said he anticipates a spike in such requests, given that the average rent in the city is over $2,000.

“I don’t believe the stimulus checks will help people enough,” Vargas said. “Our general cost of living is high. We’re also preparing for a surge of utility assistance help as soon as some of the precautions are lifted and utilities come due.”

The same holds true up in Alaska, which despite having one of the lowest number of confirmed cases per capita, is still under similar shelter-in-place orders as California—and therefore seeing a lot of its working families suddenly feeling the pinch.

“We’re serving a lot of new families who are either state employees or do not qualify for other state assistance,” said Captain Matthew Morrow, Fairbanks (Alaska) Corps Officer. “The stimulus checks do help, but don’t cover the families’ rent, utilities or fuel bills if they were delinquent.”

“We’ve seen a number of businesses close permanently over the last couple of weeks, so we’ll likely see a higher unemployment and be called upon to help those that struggle to find adequate employment.”

Lawrence also noticed an initial slowdown in requests for services in Boise as stimulus checks showed up, but she doesn’t expect that to last.

The labor force—which has seen almost all of the jobs gained in the past five years wiped out—figures to be impacted well into 2021, if not longer. And it’s having wide reaching implications in nearly every sector and community.

Captain Kelly Berggren, Glendale (California) Corps Officer, noted that the crisis has overwhelmingly impacted the Latino community where he lives, many of whom had held jobs in the service industry.

“I don’t believe stimulus checks will have any effect on the population we serve,” Berggren said. “The biggest long-term need to come out of this will be jobs. People are scared; they want answers.”

As the crisis continues to unfold, others are hoping to get out in front of some of the longer-term needs. Captain Liane Newcomb, Oceanside (California) Corps Officer, expects to see an uptick in requests for both tangible and intangible assistance.

“We’ve had families coming to us on a Friday looking for food for the weekend and only finding it with us.” Newcomb said. “Longer term, we’re looking at increased case management for PTSD due to high anxiety, fear, mistrust and inability to cope with changes.”

Of course, it’s entirely possible that the Economic Impact Payment is just the first and not the only federal effort to lessen the pain of the shutdown. Two other bills introduced by members of Congress could also provide a measure of reprieve. The first, is the Emergency Money for the People Act, which, if passed, would provide additional cash payments of $2,000 a month to qualifying Americans who have been impacted by the COVID-19 pandemic. The other, is the Rent and Mortgage Cancellation Act, which would call for a nationwide freeze or cancellation of rents and home mortgage payments through the duration of the coronavirus pandemic, or up to one year.

At any rate, the need is tremendous, and growing seemingly by the hour. Yet even as people face unprecedented circumstances, there are still plenty of encouraging signs.

That father in Boise, for instance, drove back to the corps about a week after his first visit, and popped his trunk. Inside, was a wall-to-wall supply of food and toilet paper for The Salvation Army to distribute back to those in need.

“Almost on a daily basis clients that receive our help give us monetary donations even if it’s only a dollar,” Vargas said. “It reminds me of the story of the woman who gave her last cent as an offering and how the Lord viewed that as a true sacrifice of love. They don’t have to give and they’re desperately in need, and yet they give what they have as a way to show their gratitude. That’s a true role model we must all follow.”