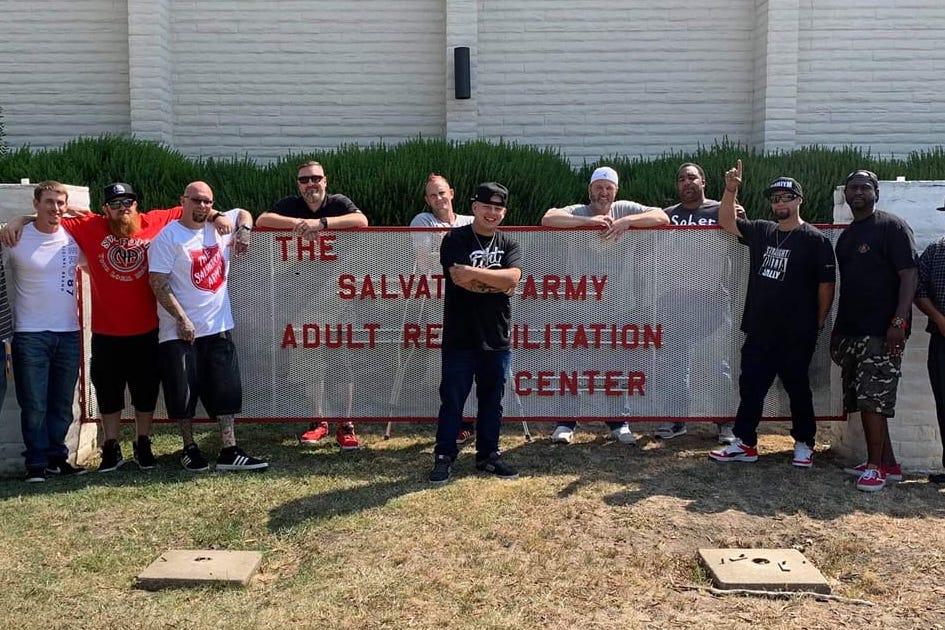 However, unlike themes common among secular rap-music, Treat’s lyrics focus on faith, recovery and fellowship.“It’s really just putting a sermon over instrumental,” Treat said. “It’s another technique to deliver Jesus.”

The music video takes place at The Salvation Army’s ARC in Stockton, California, where Treat graduated from in June 2019. In making the music video, Treat said he wanted to bring fellow Salvation Army graduates together for a day of celebration and solidarity.

“I just wanted to rep Stockton because we’ve got the best Center, period,” Treat said. “It’s kind of like your home team, you know?”

The music video begins in the Stockton ARC chapel with Administrator for Business Major Sylvan Young leading a soulful call and response song. For Stockton ARC beneficiaries, the song is familiar. Each Wednesday when someone graduates the program, the song is sung. “It’s a song that’s been around for a long, long, long time,” Young said.

The rhythmic repetitions slowly fade as the beat drops with Treat’s rap-dedication: “My God so good. This is for all my Sally boys East and West. Do it for the Kingdom.” Treat said “Sally boys” are those that have also been through a Salvation Army substance abuse program, respectfully called “The Sally.” 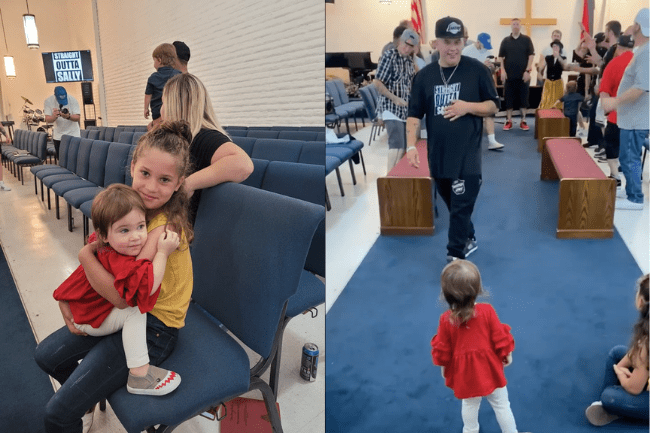 While Treat displays an abundance of optimism and faith in his lyrics, he said before coming to Stockton he was “a completely different person.”

Treat said he “grew up rough” in the small town of Alturas in Northern California, near the Oregon border. “They never thought I’d make it out,” Treat said, referring to his former high school classmates.

“When they look at you and say you’re never going to be a rapper, you kind of believe it because you’re from the country,” Treat said, adding how he never could have imagined he would be making music again—but this time for God’s glory instead of his own.

Before entering The Salvation Army program, Treat said he struggled with drug addiction and homelessness. “I didn’t really want to do drugs, but drugs had a hold of me,” he said. “That battle between good and evil was going on inside me.”

“I just wanted to change,” he said. “I was done with that lifestyle.”

In December of 2018, Treat arrived at the Stockton ARC and said the first thing he saw was a cross on the chapel wall. “I realized that God had brought me here and he wanted me to learn how to follow him.”

“I had this overwhelming feeling of love and I knew what I was there to do,” Treat said, understanding his duty to “get better and be clean” for his kids.

Treat said he “ended up having a really rough program,” even calling himself a “knucklehead” for his actions and attitude at the start of his recovery journey.

“I think that God put me on a lot of restrictions to help me grow spiritually,” Treat said, adding how he found himself with more time to read the Bible, pray, and seek the Lord. “It’s just what God can do when you give him the time to build that relationship.”

While Treat underwent his recovery program in Stockton, he said his wife and children were still suffering in his hometown. “My wife was still out there, you know, in the drug game and in these trap houses and she had my kids and I was worried, but I gave it all to God,” Treat said.

Shortly following his graduation, Treat said he was able to help move his wife and children to the Stockton area and get them the help they needed.

“So what Salvation Army has done for me…I just can’t put into words,” Treat said. “Or in better words, what God has done through The Salvation Army for me and my family.”

While Treat’s deepening faith helped him to complete his program, he also gives gratitude to Administrators Sylvan and Nathalie Young. “They are majors that love unconditionally,” Treat said.

“They gave me some chances that most people wouldn’t have given other people. Look at what grace does. When you apply grace, right? It can be beautiful.”

Five days into his program, Treat said Nathalie Young knitted hats for all the beneficiaries as Christmas presents. “We had 80 guys and she knitted 80 beanies and prayed over each one,” Treat said.

“I’ll never, ever, ever forget the love that they showed me,” Treat said.

Beyond the kindness and grace the Youngs showed Treat during his program, he said he appreciated their continued “Godly counsel and wisdom” throughout his journey with The Salvation Army beyond graduation.

Treat said the “Straight Outta Sally” music video would not have been possible without their support, open mindedness and “passion for worshiping the Lord in any way, shape or form.” 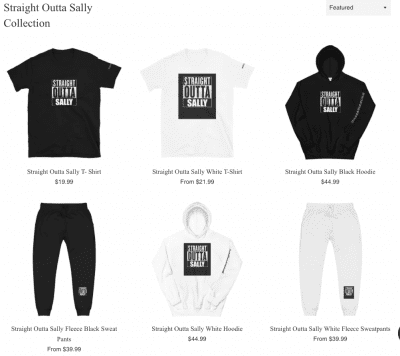 Treat also collaborated with a Salvation Army employee that owns a Christan apparel shop called Surrender Shirts, even creating a “Straight Outta Sally” collection that many graduates can be seen wearing in the music video.

The music video was filmed on a Sunday afternoon following an ARC alumni church service and barbeque. “It was just a great service and great day of filming,” Sylvan Young said.

“I was very happy with everything,” he added. “It turned out so much better than I could have even imagined.”

He mentioned how Treat not only saved his own life through the program but also helped other men from his hometown seek recovery with The Salvation Army: “We are now on our sixth man that has come through this program and accepted Christ.”

“What God put on his heart was to work on his fellow classmates, to get them in here because they were all in the same boat,” Young said. “Get them in here and get them clean and sober.”

In addition to the men from his hometown, Treat also helped the biological father of two of his three children seek treatment, even mentioning how he used to see him as his “enemy.” “He’s my good friend today, ” Treat said.

For the impact Treat has had on helping others seek recovery, Young called Treat “an incredible trophy of grace.”

“If I know anything, I know that the enemy took a lot from me,” Treat said, “The enemy attacked me really hard in my life before Jesus.”

Since graduating, Treat worked his way up within The Salvation Army and currently serves as an operations manager in a production warehouse.

Outside of work, Treat participates in music outreach: “It gives me a chance to get on stage and tell my story.” In sharing his testimony, Treat said he wants to “tell people that there’s a better way.”

In the future, Treat said he “would love to be known as a Christian artist.” He said he sees himself continuing to release new music while embracing God’s will. “God’s plan for us is always greater. And I know that now. Right? I put my trust in God.”

“If you just give your life to God, he has a plan for your life and the blessings can overflow onto you and onto your family.”