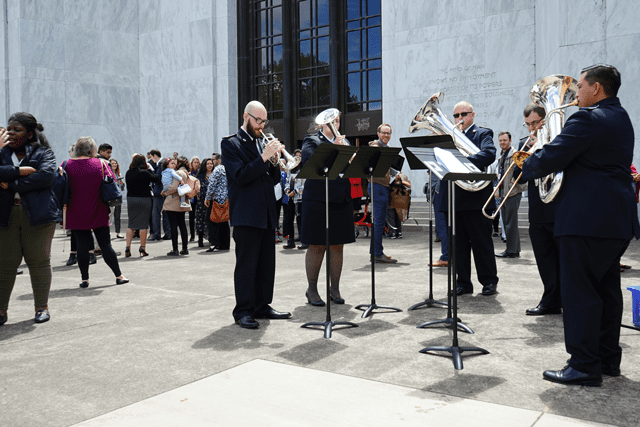 Officers, employees and advisory board members meet with elected officials.

Few things are as symbolic of The Salvation Army as an Emergency Disaster Services (EDS) canteen, brass band and doughnuts. All three were incorporated into the Cascade Division’s Capitol Day, during which officers, employees and advisory board members met with elected officials at the Oregon House of Representatives in Salem, Oregon, to raise awareness of The Salvation Army’s work. During the May 21 event, the Cascade Division held 21 meetings with elected officials who represent the districts in which the Army serves throughout Oregon.

“The goal is for program directors and corps officers to walk in, share about their program, ask if the senator or representative has any questions and then invite them to visit their corps or program this summer,” said Alexa Morris, Cascade Division Director of Communications and Marketing.

Officers, employees and advisory board members prepared talking points to use in their meetings and armed themselves with resources like fact sheets and annual reports to share with officials. Portland Metro Advisory Board Member Patrick Sheehan helped set up Capitol Day in 2017, using his experience as a former state representative in 2011-2012. On May 21, he was at the Capitol advocating for The Salvation Army Camp Kuratli and other programs. He thought the day was productive, and fostered important relationships.

“We want to be available to [elected officials] when constituents call and they need services…we have facilities to help with all of those things, so it was an educational as well as an advocacy meeting,” Sheehan said. “It was important to show not what they could do for us, but what we could do for them.” Sheehan was first connected to the Army when he was in office and a friend who was an architect working on a project at Camp Kuratli needed help after park regulations put the plan on pause. Sheehan called the director of state parks into his office and afterward everything was back on track at camp.

“I think most Salvation Army regions should be doing this,” Sheehan said. “It’s really important to build those relationships because you always run into things that you need, and it’s amazing how quickly you can unstick a problem when you get a state senator or representative involved.”

Executive Director of The Salvation Army’s White Shield Center Alisha Devogele met with officials to advocate for the center’s pregnant and parenting teens. Devogele spoke to her senator and representative about bills that would directly impact the White Shield Center, advocating for some and against others—always considering the welfare of the young women the Army’s program serves. “The goal is that this is going to be episodic care, and it’s going to help a girl get back into society,” Devogele said. “People don’t know we do that really good work…What better opportunity than to meet face to face?”

The Salvation Army received recognition inside the House of Representatives, where a brass band from the Cascade Division performed selections, including “A Mighty Fortress is Our God,” during the morning’s opening ceremonies. The band moved outside to perform on the steps of the Capitol, near an EDS canteen operated by Divisional Headquarters staff and officers who distributed free doughnuts and coffee.

In addition to the edible treats, the EDS team greeted passersby and spoke about The Salvation Army’s services in Oregon, distributing fact sheets and “I support The Salvation Army” stickers. With National Doughnut Day on the horizon—the first Friday in June—the EDS canteen was also prepared to answer questions about the Army’s history with Doughnut Day. According to Morris, nearly every program director and corps officer received commitments from senators and representatives to visit their corps and program this summer after the government session concludes.

“Each of the 21 meetings was excellent,” she said. How to meet with an elected official

You will have 15 minutes to enter the office, educate the elected official and depart with all your takeaways. Work quickly.