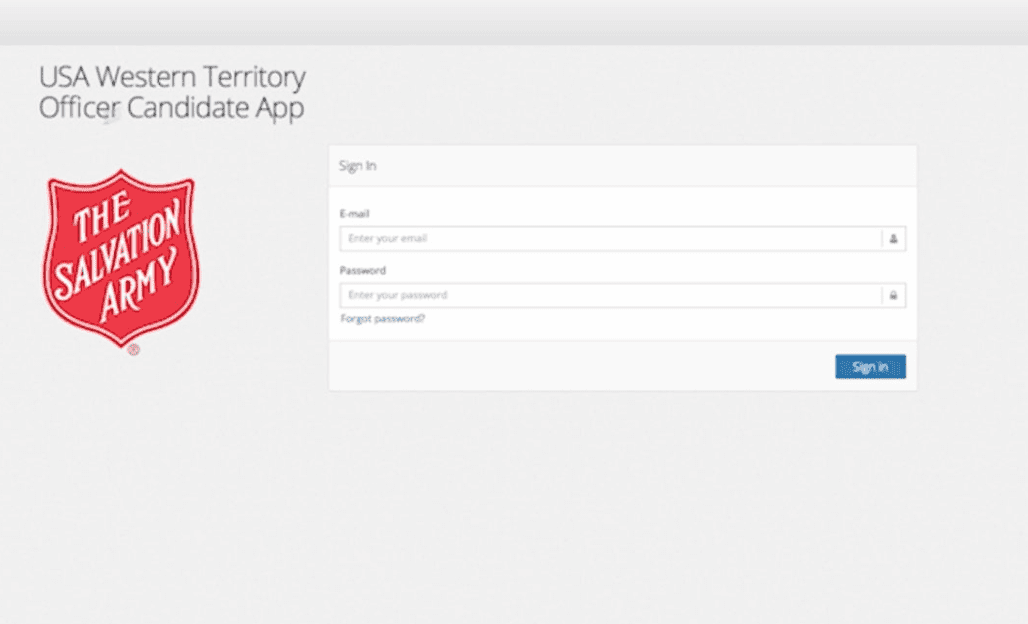 Training college applicants will be able to complete forms online.

Salvationists ready to apply to the College for Officer Training at Crestmont will encounter a new, digital-friendly application process.

Up until now, officer candidates were mailed voluminous application packets containing nearly 30 supplemental forms. They would put pen to paper—hoping for no errors—and then mail back the completed forms.

It was time to enter the digital age.

In 2008, the Candidates’ and Recruitment Secretary at that time envisioned an online candidate web portal and initiated a meeting with Territorial Headquarters’ (THQ) IT department. Further consultations with IT personnel and web developers followed. Best practices for working with candidates emerged from brainstorming sessions and phone conferences, including annual meetings with the National Candidate Recruitment Committee. One question carefully considered was: Should the Western Territory’s candidate web portal be an extension to currently existing systems or a standalone system designed by an independent developer? Which would be more efficient?

Finally, in October 2017, the Territorial Finance Council approved funding for the Candidates’ and Recruitment Department to move forward and build a candidate web portal with the aid of an independent developer—Jesse Melnick—who had already established successful applications for the four U.S. territories.

“The digital application is necessary and relevant in this age of technology,” said Captain Joanne Louangamath, Territorial Candidates’ and Recruitment Secretary. “It just makes sense to move in this direction. Naturally, we’ll make adjustments along the way to make it as efficient as possible.”

Through the new web portal, candidates will be able to complete the necessary forms in one digital location and upload predefined scanned documents to fulfill their application requirements. Storing candidate case information digitally offers advantages, too, including ease of access, data loss protection and less paper storage. The web portal also features a summary screen for both candidates and administrators to track the status of existing applications. Although detailed reporting is not included in phase 1 of the candidate web portal, eventually aggregate reporting on candidates will be available—identifying trends and breaking applicants out by demographics.

“I view this whole process as a relay race, with the baton passing from one runner to the next, with you finally crossing the finish line,” he said. “It just goes to show how the Army is supposed to function from one change of officers to another.  The vision of one continues to be built upon by others until all of the right pieces are in place for it to become reality.”

One prospective candidate, when asked to be the first test subject, said, “I would love to do the digital application. I don’t know if it’s the generation, but I believe I would be much more comfortable with an application in digital format [and] I would be able to submit items much more quickly.”

This candidate—the first to use the site—will provide constructive feedback based on his experience. Going forward, all candidates will use the digital app.

In addition to the digital application, an informational website for officer candidates will soon go live.

With reporting by Dinah Windsor