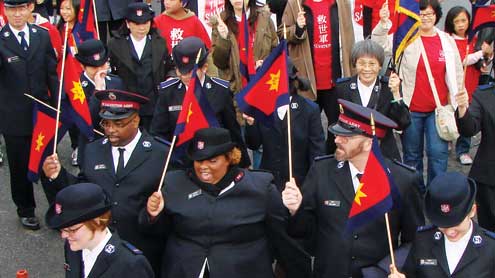 Ambassadors of Holiness and Friends of Christ sessions evangelize during “fall blitz” in San Francisco.

Following are reflections from some of the cadets.

David Harth: “I helped a couple of men with food and socks, but more important, I was able to pray with them. I’m convinced God is calling me into some kind of street ministry.”

Melissa Xiong: “At the altar call there were so many men that went up…They just wanted someone to hold onto, someone besides drugs, and they found it in God. I prayed and cried for them…their desire for God, their past they wanted to leave behind….”

Leslie Cyr: “I saw that many professed to love Jesus…their overriding dilemma was giving up their destructive habits and lifestyles—they wanted to come to him clean. They all wanted prayer against the forces of evil and wept when I prayed for the Lord’s protection.”

Jeremy Aird: “I met Kenny on the streets. I asked him if he needed a sandwich and he said no, but he did need prayer for his protection on the streets and to recover from his alcohol addiction. I prayed with him. I could tell he was crying. I pray for Kenny every time his face comes into my mind.”

Tammy Poe: “While we were praying for a man I saw his hand reaching out to us. When I went to take it he grabbed mine and drew it to his face, kissing it and holding on tight. I remembered hearing that many don’t receive another human touch for days and are hungry for that touch. I thought I was going out to help change lives. Hopefully I did. But through them God changed me.”