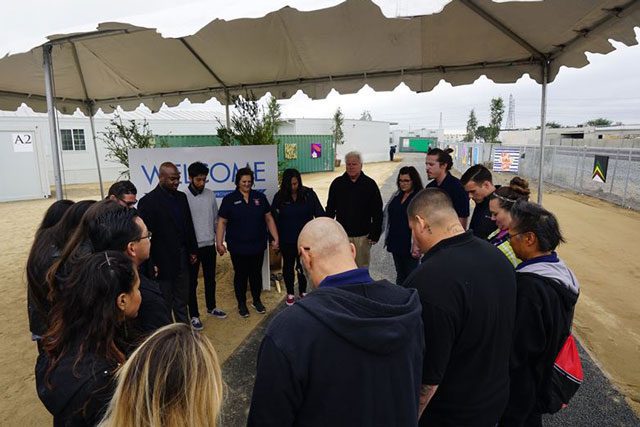 ‘I always believed this shelter was the work of a miracle’

The January 31 Dedication Ceremony for the Anaheim Emergency Homeless Shelter was a celebration of achievement for The City of Anaheim, The Salvation Army, and the Project Team, of which I was proud to be a part of.

The audience of 300 dedication attendees burst into laughter as California South Divisional Commander Lt. Colonel John Chamness joked that the 79 days it took to make the shelter ready to open was “not bad” as he compared it to the biblical success of Nehemiah rebuilding the walls of Jerusalem in 52 days.

As the audience enjoyed the humor in the comparison, I’m sure many of the project team members felt the same way as I did: finishing this shelter on schedule was the work of a miracle.

With the dedication date established, the team really had to rely on one another, and, really, we just had to believe.

At the dedication, The Salvation Army Orange County Director of Strategic Assets Ben Hurst said it best: “it stands as a testimony that all things are possible to those who believe.”

I smiled as I heard that. Being a person of faith, I found the dedication-day speeches particularly meaningful.

The support, and teamwork, the team in the field—of which I was managing—received was more proof that a lot of people believed in what we were doing.

General Manager of the Anaheim Public Utilities Dukku Lee couldn’t have summarized the collaboration involved with the project any better when he said, “When you put a project together like this, it takes a lot of people, a lot of effort and tremendous teamwork.”

That was another miracle of this project for me—we were given such short notice to begin the project, and we were given another incredibly short amount of time to complete it. The fact that field teams were even available to begin working immediately simply doesn’t happen often in construction. Most projects and teams are scheduled weeks in advance. And that brings me to my next miracle: the project people, the laborers, the managers, the executives. While I’ve often worked with professionals, in this business I feel like it’s a miracle to have caring people pulling together across the entire team spectrum.

The tradesmen (women and men) were asked to work, sometimes out of sequence with other trades, and proceed with work when they were wary about doing so. The design team, and the executives who needed to approve designs, did what we needed them to do to help us stay on schedule.

While so many people were critical to our team success, we simply could not have achieved that success without the dedicated support of Lee, Hurst and Mark Brownrigg, Anaheim’s project manager. The leadership I witnessed from each of these men was inspiring. Their mission to pull all the right strings and make things happen really made the project successful and enjoyable for me.

As I’ve been in the business of construction longer than I would care to mention, I feel like I’ve seen it all. I’ve been blessed by miracles in projects throughout my career, but this project remains special, and miraculous, to me.

Maybe the miracle is the people and families in need who will find a better place to rest at night receiving service in the professionals of The Salvation Army to get the assistance needed to improve their lives.

And, maybe, the miracle is that this late in my career, in a construction field that isn’t always known for its caring and compassion, I can still be inspired by the people I worked alongside—and for. Maybe that’s a miracle in itself.