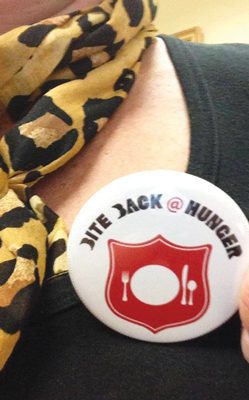 In 2011, 50.1 million Americans, including 16.7 million children, lived in food-insecure households, according to Feeding America, a U.S. based non-profit organization with a network of more than 200 food banks and food rescue groups.

Claire Dunmore, Salvation Army San Francisco Metro program coordinator, was surprised by how small a household income has to be to qualify for the Supplemental Nutritional Assistance Program (SNAP), formerly the Food Stamp Program.

The campaign centered on three major components. Staff first reached out to local restaurants to help spread awareness to their customers. Servers at partnering restaurants were then encouraged to give a Bite Back @ Hunger envelope with the meal check for customers to give cash, a text message gift, or scan the QR code to visit salvationarmysf.org.

Lt. Col. Steve Smith, Golden State divisional commander, invited all divisional officers, employees, volunteers and donors to participate in the SNAP Challenge––live off of $4.50 per day per person for food. Dunmore was among the participants who struggled with the challenge, which ran from Sept. 9-13.

“You have to plan your meals for the entire week and only cook at home,” she said. “There are no funds for eating out, not even fast food…One flavored coffee is a whole day’s worth of food.”