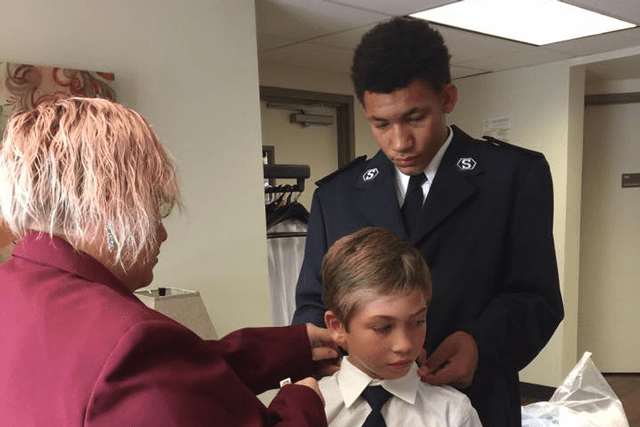 In two years, The Salvation Army has helped 14 families move out of motels and into permanent housing in one Colorado community.

When Lts. Timothy and Tanya Pemberton moved from California to lead The Salvation Army Aurora (Colorado) Corps in July 2015, they met with community leaders to discover the big issues residents faced, hoping to find ways to help. Two major concerns revolved around safe childcare and families living in motels with no means of escape.

“We felt it our responsibility to find out what the community needed and we worked diligently to bring that help to the community of Aurora,” said Timothy Pemberton.

In two years the Pembertons made significant progress toward their goal. They started an after-school and summer childcare program and helped 14 families move out of motels and into permanent housing via The Salvation Army’s Housing First program.

“It may look like a small task to open an after-school program but it was a lot of work getting our license, with so many different rules and regulations to learn and uphold,” said Tanya Pemberton. “When it comes to rehousing people in the motels, we had to have a relationship with those families before they would let us help, and that was not always easy.”

Yet, the Pembertons, with no staff and no budget, changed the lives of 14 families, including Candice Childs’ family.

For Childs, her 15-year-old son, Alex, and her husband, Jeremy White, violence had been an everyday occurrence for five years. That’s because their home was a motel on Denver’s notorious Colfax Avenue, an area with a reputation for mayhem.

“There were stabbings, shootings, thefts, drug dealing and there was a murder four doors down from us,” Childs said. “It was not a place for kids.”

It also wasn’t cheap. The family paid $800 every two weeks in rent and thus couldn’t save enough money to secure an apartment.

“The job I was working at, it wasn’t the best,” Childs said. “I was barely making $11 an hour, and paying all that money in rent and food. We were strapped for every penny we had. It was a tough five years.”

Another woman living at the motel introduced Childs to the Pembertons.

“I started going to church at The Salvation Army and my son was attending the Teen Night,” Childs said. “Tanya asked me ‘how long have you been in the motel? Do you know there are programs that can help?’”

Pemberton referred Childs to The Salvation Army’s Housing First Program, which helped the family get out of the motel and into an apartment near Alex’s school.

Church members moved the family into their new apartment a week before Thanksgiving 2016. It’s not only more space; it’s also $700 a month cheaper than the motel, which has given the family more financial stability. According to Childs, it’s been a steady stream of blessings since then. Alex volunteers at The Salvation Army Aurora Corps after-school program helping the younger kids, and he’s also learning how to run the soundboard at church. Beginning this fall, he’ll attend 10th grade at a nearby charter school where he’ll be able to take college-level courses and work toward his college degree at the same time he’s finishing high school. And in early August, Childs and Alex were enrolled as members at the corps—she as an adherent and he as a senior soldier.

“We were really struggling when we met Tanya,” Childs said. “She came at just the right time and it’s just been a big blessing.”