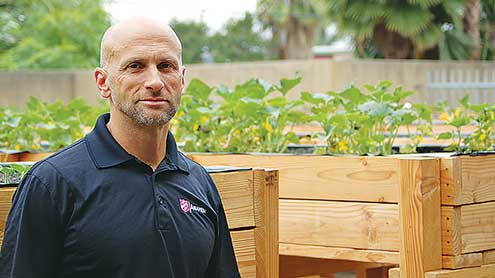 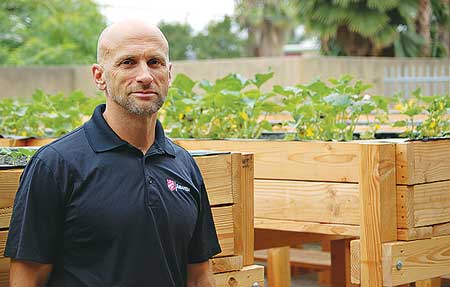 Freeman stands afront the 1,000 square feet for growing crops. At full maturity, the farm should produce about 450 plants a month and up to 7,000 tilapia
a year. Photo by Jared McKiernan

Volunteers help transform an empty lot into an urban farm.

Staff at The Salvation Army’s Anaheim (Calif.) Praiseworks Corps Community Center met a consensus late last year that they needed to generate more income. Not to mention, they wanted to make use of an empty blacktop lot behind the community center. They uncovered the solution to both in an unlikely venture: aquaponics––a sustainable food production system that conflates growing fruits and vegetables with raising fish by recirculating the water between the two environments.

Aaron Flores, worship and creative arts director, contacted Aaron Flora, an old friend who builds aquaponics farms for nonprofits. Within only a few months, the vision became a reality. Flora designed the urban farm, and 40 volunteers helped construct the foundation for it in just two weekends.

“The thing that was exciting for [us as] a church ministry is it creates a strong connection point,” Flores said. “Most importantly, we’re turning that blacktop into a resource where we can help feed the community and invest in the city of Anaheim in a really cool, practical way.”

“We’re basically just recreating a chunk of the ecosystem,” said Flora, who has built aquaponics farms around the U.S., in Africa and Asia. “I think people don’t really believe it.” 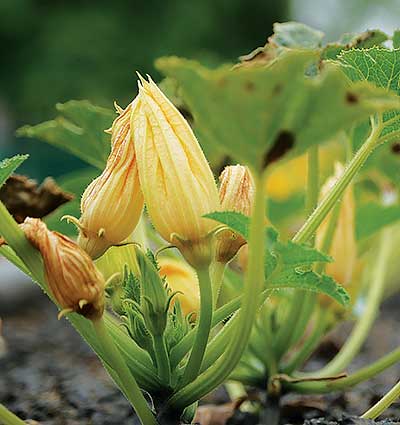 A squash plant blooms in the aquaponic garden.
Photo by Jared McKiernan

Once the system reaches full maturity, Flora expects it will be able to produce around 450 plants a month and between 6,000-7,000 tilapia a year. The opportunity to make organic food accessible to lower income residents was appealing to Envoy Michael Freeman, who runs the community center with his wife Joanna.

“I know when I go to Sprouts, I pay a fortune for this stuff,” Freeman said, “so it’s great to be able to have it here and have it fairly priced for the community.”

Aquaponics is an emerging technology due to its cost-effectiveness and capacity to serve the community. Billings, Mont., and Long Beach, Calif., are just two other locations where The Salvation Army has experimented with aquaponics. The Anaheim Praiseworks Corps is the largest in the Western Territory to do so thus far and if this farm proves to be a success, it may prompt others to follow suit.

In addition to supplying the community center’s emergency food pantry and the Anaheim Adult Rehabilitation Center, Freeman plans to sell the fresh fish and produce to local restaurants and possibly even start a farmers’ market.

“Even if we don’t sell a ton, we’re still out there and they’re learning about what The Salvation Army does,” Freeman said. “The Salvation Army isn’t just about drug and alcohol rehab. There’s a lot more to what we do.”

Though aquaponics farms are not commonplace for The Salvation Army––at least not yet––Flores insisted the project aligns seamlessly with the mission of the community center.

“Overall I think the feeling was, ‘This is worth the risk,’” Flores said. “We really don’t treat our community center as a facility. It’s really important that it’s used as a mission and it’s OK to take risks for the bigger picture.”

Listen to an interview with aquaponics expert Aaron Flora via bit.ly/14dG2RY.