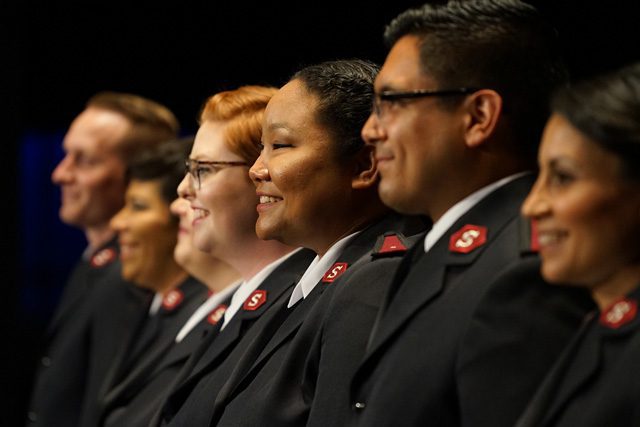 The Salvation Army Western Territory’s 35 cadets of the Messengers of the Gospel Session proudly received their new ranks as lieutenants during the Commissioning and Ordination service at the Pasadena (California) Convention Center Civic Auditorium June 10.

“We come expecting God to be here, and he is,” Riley said. He led the singing of the hymn “Praise My Soul The King in Heaven.” A performance by the Staff Songsters of “Thou Art Worthy” followed. 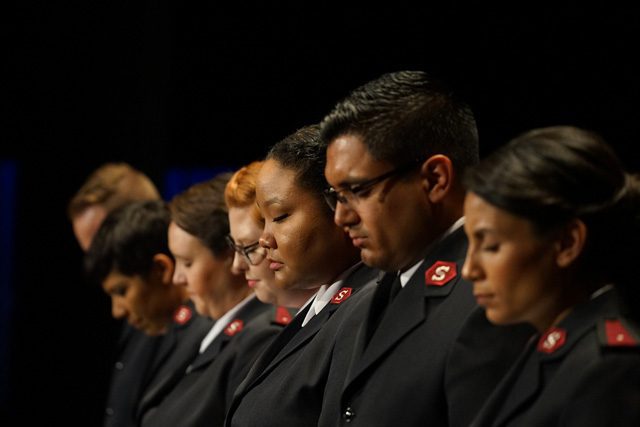 Saunders shared the covenant the cadets made of their calling with God. He asked all Salvation Army officers to stand as he read the covenant, serving as a reminder of their own covenant they made when they started officership.

He commended the cadets on their hard work and dedication, leading to this moment.

“They have heard the call. They have made the commitment,” Saunders said. “They have signed the covenant, and now they are ready for commissioning.”

The Messengers of the Gospel marched into the auditorium to “All There is of Me,” eagerly taking their place on stage to await their commissioning and ordination. 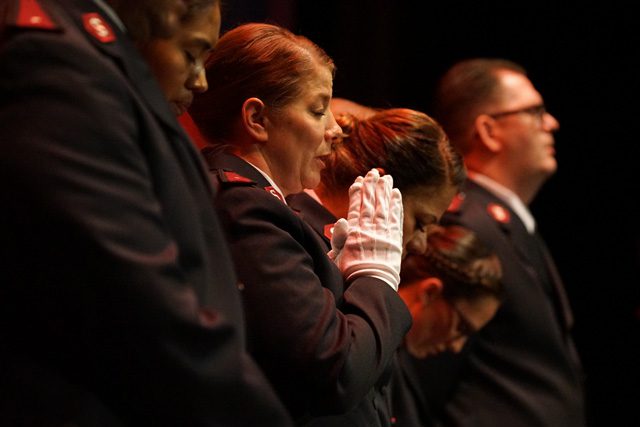 Once the flag was positioned, the cadets sang their song of dedication, “The Messengers of the Gospel.”

As instructed by Riley, the cadets recited the Affirmation of Faith, proclaiming the faith in the Lord, and committing to share the Lord’s truths and be faithful officers of The Salvation Army.

Riley invited the congregation to join him in singing the hymn, “Take My Life and Let It Be.”

One by one or as couples, the cadets were received by territorial leaders Commissioners Kenneth G. and Jolene K. Hodder.

As each approached, Jolene K. Hodder read each cadet their life verse and Kenneth G. Hodder ordained them as ministers and commissioned them as officers of The Salvation Army with the rank of lieutenant.

Jolene K. Hodder then prayed for the cadets, asking the Lord to guide them, protect them from evil, and give them a voice to stand up and be courageous for him.

“The Messengers of the Gospel are giving all they have…so they can extend your kingdom,” she said “We give them back to you today Lord, asking that you use them, and give them everything they need to do that which you need them to do.” 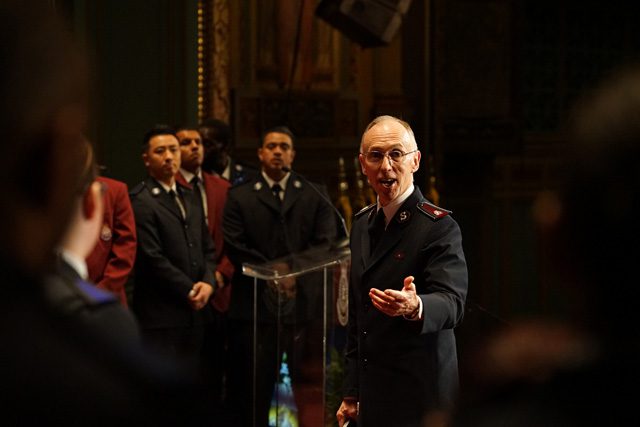 Kenneth G. Hodder introduced the Messengers of the Gospel to the congregation as the newest officers of The Salvation Army.

Lt. Shelby Hanauer gave her testimony, and said that God did not give her the gift of artistry, but that God is an artist who molded her into the person she is today.

“I stand before you today as God’s masterpiece,” Hanauer said.

She spoke of the obstacles the Lord helped her overcome including divorce, depression, anxiety, loss loneliness, despair and doubt. Hanauer felt God calling her for officership while in Estonia.

“With clarity he spoke, ‘This is what I made you for,’” she said.

Hanauer read the session verse: “And this Gospel of the Kingdom will be preached in the whole world as a testimony to all nations, and then the end will come” (Matt. 24:14).

“The message of the gospel is simply this: we are to love God and love others,” she said. “I encourage you today to not simply preach the Gospel, but to live it out daily, so that the whole world may experience the unconditional, inclusive, perfect love of Christ.”

“This is the truth,” Tollerud said. “This is God’s word, and we believe.”

The Staff Band performed “And My Soul Overflow.” 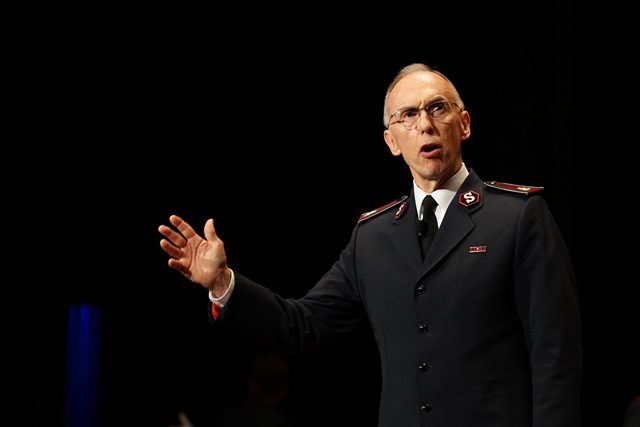 In his message, Kenneth G. Hodder spoke about the “Tree of Life” sculpture, created by four artists in Mozambique, that was made up of weapons surrendered from the country’s civil war and created as a symbol of peace.

“It is a magnificent artistic achievement. But when you look at the ‘Tree of Life,’ it is somehow oddly unsatisfying,” he said. “Though it constitutes peace, it provides no plan. That tree of life cannot redeem.”

While humankind seeks peace through images and sculptures, Hodder said, they will not find it there.

“We want love. We want peace. We want joy. We want fulfillment.,” he said. “If all we ever do is fashion sculptures and build images in our hearts and minds of the things we want, we will only find that they rust and will collapse in their own weight, leaving us with deconstructed pieces. That cannot be the way God intended.”

He said artistic representations will not give the world what it wants, but that God can.

“What we need is transformation,” Hodder said. “Jesus Christ is our wonderful counselor, our mighty God. Only he is worthy. Only he can give eternal life. That is why for us this morning, it is either Jesus Christ or it is nothing.”

Hodder spoke of the Messengers of the Gospel: “They have individually given themselves to live for Christ because he has given them life.” He invited others to do the same, either by accepting the Lord as their savior or seeking officership, to fill the void they may be feeling.

“There’s still room for more,” he said. “God is waiting. The Lord is eager to fulfill that need.”

After an alter call, Lt. Colonel Stephen Smith, Territorial Secretary for Personnel, led the congregation in singing “Shout to the Lord.” Saunders then closed the service with the benediction.