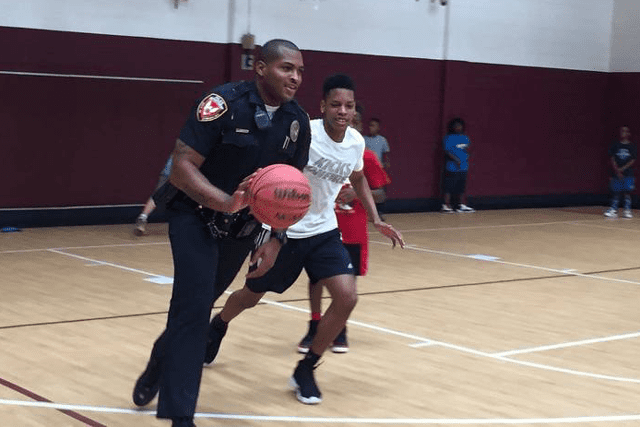 Through a simple game of pick-up basketball or checkers, police officers and kids in Durham, North Carolina, build trust and meaningful relationships.

While fewer than 400 yards separate them, at times it seemed The Salvation Army Boys and Girls Club and the Durham, North Carolina, Police Department were thousands of miles apart.

It’s a sign of the times. Mounting tension between police departments and communities across the country and an increase in gun violence and police-involved shootings have created a chasm in understanding and trust, particularly among the city’s most vulnerable: children and youth.

That’s why last summer the incoming captain of the District One station was inspired to start a new initiative called “Bridging the Gap”—an important collaboration between The Salvation Army and the Durham Police Department in which three days a week, officers come by in uniform and simply mingle with club members.

“We talked and said why not have the officers come and spend time with the kids so we can build a foundation of trust, and bridge that gap of understanding,” said Captain Demetrius Mock of the conversation with the club’s leadership. “It’s been very positive. We’ve come a long way from where we started.”

The Durham Boys and Girls Club serves about 85 children and teens ages 6–18 from the inner city of Durham throughout the year with after-school programming, summer camp, and teen nights. Through basketball, reading, coloring, and checkers, the police collaboration has become one of the most popular ways for both the kids and the officers to spend time blowing off steam together, according to the club’s Executive Director, Joshua Dorsette.

“It’s a really good opportunity because it helps the officers build a relationship with the community,” he said. While different officers will rotate in and out as their schedules allow, one officer in particular, Officer Jennifer, has made it a point to come more often than most, Dorsette said.

“She’ll stop by on her way to work just to say ‘hi’ and check in on her little group of kids,” he said. “It means a lot to them.”

It’s blossomed into a growing partnership that will continue throughout the summer and into next year, with an intramural basketball team with officers in the works.

The program is already making a difference in the lives of youth in the area.

Tamia Williams, a former club member who recently graduated high school, said she’s seen firsthand how the engagement with officers and the younger children has changed how they view one another.

“At first, they said they were kind of scared when the officers came in,” said Williams, who will be attending Johnson C. Smith University in the fall and studying education after being inspired by working with kids in the club since sixth grade. “It was helpful and informational for them. They know what’s going to happen if they do bad things in life.”

More importantly, some of them have found new friends or mentors in the officers, or have gained interest in a future career in law enforcement.

“We hold break-out sessions to talk about leadership and other topics depending on the ages of the kids,” Dorsette said. “We talk about healthy habits and staying off drugs. The kids learn about what it takes to be a police officer—and now some of them want to be one.”

It’s this positive interaction that Mock had in mind when he started the program a year ago.

“We’re coming in as parents, not as law enforcement,” he said. “I told my officers to just go in and be yourself: be a parent, be a friend. Just talk and let them know you care.”

Mock said other districts have caught wind of the program and are interested in replicating it in other areas since they believe investing in youth centers such as The Salvation Army Boys and Girls Clubs can help lower crime rates, among other benefits.

Dorsette is hoping it will catch on far beyond Durham, too.

“We just had another officer-involved shooting in the community recently,” Dorsette said. “If we could get this [program] out more, it could be huge for the greater community. It was really easy to do. It was just a matter of someone stepping up, thinking positively and wanting to make a difference.”