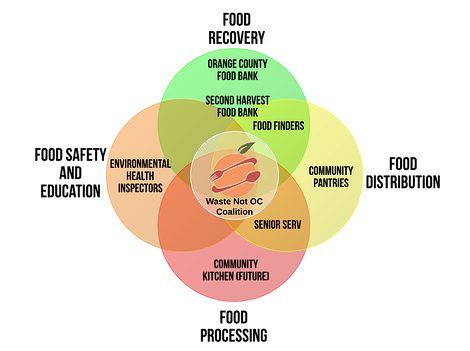 The Waste Not OC Coalition works to get garbage-bound food into the hands of those who need it most.

When you think Newport Beach, Calif., Range Rover caravans and sun-kissed sands come to mind, and justifiably so. With nearly a third of the city’s households netting over $200,000 and a median home price of over $1 million, Portfolio.com ranks Newport Beach as the nation’s richest city. Meanwhile, a quick trek up state Route 55 is Santa Ana, one of its poorest.

Welcome to Orange County––a microcosm of wealth discrepancy in the United States, and an unassuming face of food insecurity. Orange County ranked second out of 58 counties in California for food insecurity among low-income adults, according to a California Health Interview Survey. Further, roughly one in five children in Orange County and 400,000 people overall do not know where their next meal is coming from.

According to a report from the Natural Resources Defense Council, 40 percent of the food in the U.S. goes to waste.

Dr. Eric Handler is the deputy public health officer for the county. In his Santa Ana office, he mentions Malcolm Gladwell’s book “The Tipping Point: How Little Things Can Make a Big Difference” (Little Brown, 2000) that offers insight on three types of people: salesmen, mavens and connectors. That’s where Handler comes in. The solution for ending hunger in Orange County was out there. He just had to connect the dots.

“I asked Mark Lowry, director of the [Orange County] Food Bank, two questions,” Handler said. “I said, ‘Do you have enough food in your food bank?’ And he said no. I said, ‘Do you think if we captured all of the food that was thrown away, do you think we could end hunger in Orange County?’ And he said yes. And I said, ‘Then why aren’t we doing it?’”

So, Handler helped unite over 20 organizations in November 2012 to form the Waste Not OC Coalition, a public-private partnership. The group aims to end hunger in Orange County by redirecting nutritious, perishable and prepared food from restaurants, grocery stores and other vendors that would otherwise be discarded and delivering them to food banks and pantries. Handler said the short-term goal is to “blanket” the city of Anaheim, then once they’ve demonstrated success, expand to other cities. In July 2014 alone, the coalition diverted over 12,000 pounds of food, equivalent to over 10,000 meals, that would’ve been sent to a landfill.

According to a report from the Natural Resources Defense Council, 40 percent of the food in the U.S. goes to waste. Many local vendors initially held concerns about the legal ramifications of handing off excess food to charity. However, through the Bill Emerson Good Samaritan Food Donation Act, signed into law in 1996, all individuals, businesses and other groups acting in “good faith” are fully protected from civil and criminal liability in case their donated product is later found to harm a recipient.

It was just a matter of getting the word out, and sure enough, vendors gradually climbed aboard and began donating surplus food to the project.

Lowry noted that the initiative was unique in that it wasn’t spearheaded by a charitable organization.

Another major step in the effort was to urge local hospitals and social service clinics to ask clients if they are facing food insecurity. Hunger is, after all, a public health issue.

Anemia, diabetes, heart disease, stunted intellectual growth and obesity can all take effect with a lack of nutritious food, especially during childhood, according to the National Institutes of Health. Moreover, many inexpensive, high-calorie options lack the nutrients vital for good health and productivity. Food insecurity can also increase stress hormones, which can lead to weight gain.

DO GOOD
-Volunteer with Food Finders in your community.
-Donate to the Waste Not OC Coalition.
-Read “The Tipping Point: How Little Things Can Make a Big Difference” by Malcolm Gladwell (Little Brown, 2000).
-Take the SNAP Challenge to get a sense of life facing hunger by committing to eat on roughly $1.50 per meal.
-Download HealthyOut in the App Store to find healthy restaurant meals near you.
-Try a recipe from “Good and Cheap: Eat Well on $4/Day” by Leanne Brown at leannebrown.com.
-Watch the 2013 documentary “A Place at the Table” to learn about the effects of food insecurity.
Once health professionals in the county identify individuals in need of assistance, they direct them to local resources. For this, the group developed an interactive map on its website that lists all of the local food pantries. Currently there are two food banks and over 240 food pantries in the county. Handler is also working on developing a mobile app with the American Academy of Pediatrics Chapter in Orange County to share the same information.

Though much of the excess food comes from local restaurants and grocery stores, schools, hospitals and even one jail have joined in the effort. The Theo Lacy Correctional Facility is now donating up to 500 meals a day that previously would have been discarded.

Lowry added that food reclamation also benefits the environment and gives donors a tax benefit through the nonprofit Food Finders, which picks the up the excess food and delivers it to food banks and pantries.

While the movement has garnered notable support, it does encounter the occasional cynic, according to Bernadette Garcia-Silva, Waste Not OC project manager. At a recent event to promote the coalition, a woman approached Garcia-Silva.

“She said, ‘People don’t actually go hungry here,’” Garcia-Silva said. “‘Do you know anyone who doesn’t have enough to eat? Do you know anyone?’ She was basically interrogating us because she just did not want to believe this.”

Handler said he is encouraged by the early success of the initiative, but eyeing bigger change. He is currently working with the National American Academy of Pediatrics, which has a task force on poverty and hunger, to scale up the Waste Not OC model on a national level.

“This can be replicated in any county in the United States” he said. “Just imagine a national movement to do this.”