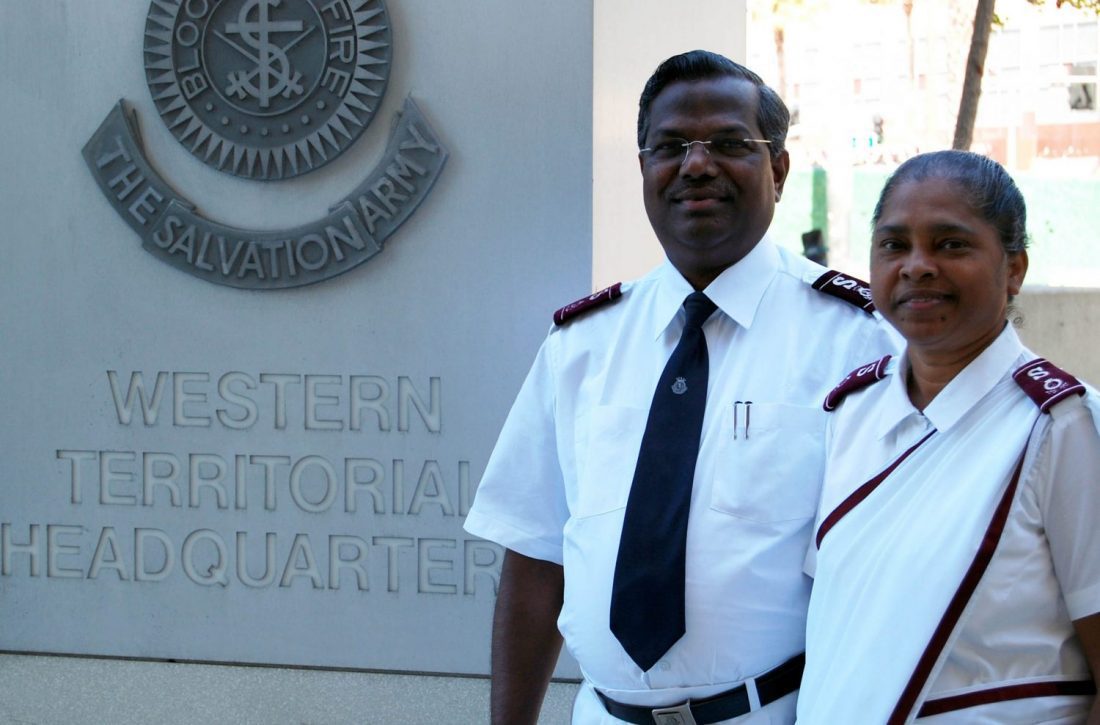 The Jameses toured corps, adult rehabilitation centers and Kroc Centers, but primarily came to the West to see firsthand how the territory’s cabinet system operates, having recently introduced such a system in their territory.

“I wanted to know how the cabinet system is functioning here,” MC James said following his observation of the weekly territorial board meetings. “The West is functioning very well. Things are delegated to each department and all are doing their responsibilities…everybody feels their responsibility.” He plans to provide teaching seminars upon returning to help people feel an ownership of resources and duties.

“We are not just officers, we are owners and I want people to feel the ownership of doing services for God,” James said. “It may even help the ministry grow.”

The India South Eastern Territory is one of six Salvation Army territories in India. In its 10 divisions, the territory includes 684 officers (509 active), 671 employees, 310 corps, 84 outposts, 18 schools and 50 institutions. It has roughly 49,000 senior soldiers, 18,000 adherent members, and 4,900 junior soldiers, according to The Salvation Army Yearbook for 2012.

James said the territory’s focus is on spiritual services, including a faith goal system in which he challenges every corps to gain a minimum of four new members a year.

In addition, the territory runs three vocational training centers that provide education in computers, tailoring and embroidery, and industrial and electrical skills; four child development centers, funded by Compassion for India, that offer 1,400 children after-school care, school fees and uniforms; a hospital and HIV awareness programs; and a retreat center.

James said the government does not support Christians—who make up just 2.3 percent of India’s population, according to the Census of India—and require, for example, Christian schools to pay more in fees. He said less jobs are available to Christians.

In 2011, 30 cadets were commissioned and ordained in the India South East Territory. In the country’s new officer training system, individuals complete one year in a candidate training program and two years in residential training as cadets, during which they earn a bachelor’s degree in theology. In the five years following commissioning and ordination, while appointed to duty, new officers must complete self study courses before they are promoted to captain. The territory is currently discussing using this period of study as a means for officers to earn a master’s degree in divinity.

Like the U.S., India faces high unemployment, which led to an increased risk of human trafficking and exploitation. The India South East Territorial women’s ministries department, led by Susamma James, offers awareness programs for young girls and mothers and instruction in earning a sustainable living.

The Jameses instituted the Female Marriage Help program, which gives brides 10,000 Rupees ($181) to buy a wedding dress and help with related costs, including the dowry. In four years, the program has assisted 500 brides. A special offering for this program is taken twice a year in the territory’s corps.

As the territory continues to grow, James said he wants to see it become financially self-supporting. The Army is providing teaching to corps about giving, and changed the focus from “stewardship” to “tithe giving offering.” He said roughly 80 percent of soldiers are daily workers, who should make the daily minimum wage of 152 Rupees ($2.76), though not all do. According to the Population Reference Bureau, 86 percent of the Indian labor force works below this rate. However, this teaching program, he said, is slowly aiding in the territory’s tithes.

The Jameses were commissioned in 1979 and 1983, respectively, and have served in three of the countries six territories, including as territorial leaders in the India South East Territory since December 2006. They have two children.