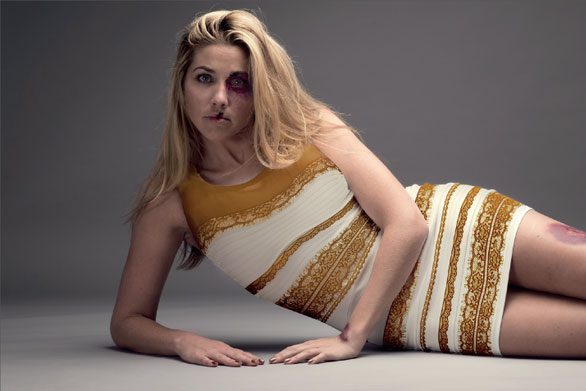 An innovative Salvation Army campaign in South Africa to raise awareness of domestic abuse has taken social media by storm. Only a few hours after a hard-hitting ad was published, the social media reach had hit more than 16 million people, with no signs of a slow-down.

In late February, millions of people gave their opinion on the color of a strangely lit dress—quickly known simply as “the dress” or #thedress—with some convinced it was white and gold and the rest recognizing it as blue and black. Scientists from around the world were called upon to explain the phenomenon and share their expertise on why people see color differently.

Advertising agency Ireland Davenport took the worldwide interest and used it cleverly to highlight the issue of domestic violence in South Africa, while also publicizing The Salvation Army’s work with abused and trafficked women. They photographed an image of a “bruised” model wearing a copy of #thedress. The Army’s ad, published in the Cape Times March 6, included the headline: “Why is it so hard to see black and blue,” along with text saying: “The only illusion is if you think it was her choice. One in six women are victims of abuse. Stop abuse against women.” A phone number for anyone needing support is also included.

The Salvation Army operates two residential care centers in South Africa—in Cape Town and Johannesburg—that provide for the physical, emotional and spiritual needs of abused women, helping them to recover from abusers and leave as independent, confident women.

“Awareness of the problems of domestic abuse and human trafficking is key for us, and the reaction to this campaign is overwhelming,” said Major Carin Holmes, public relations secretary for The Salvation Army Southern Africa Territory. “More than 3,000 tweets an hour shows the desperateness of the situation—domestic violence and human trafficking needs to be stopped.”

According to Holmes, Ireland Davenport did not charge The Salvation Army for its services.

Reaction to the campaign became a trending topic on Twitter, with voices including fashion magazine Cosmopolitan, New York’s Adweek and youth-orientated UK news site BBC Newsbeat. TV and radio stations around the world are also running items about the campaign.