While sometimes we may have difficulty seeing the forest because the trees get in the way (i.e. getting so caught up in the details that we fail to see the larger picture), we are faced with equally troublesome issues when the converse is true: those times we get so focused on the forest that we miss the trees altogether! In other words, we look with consternation on the immensity of our mission (i.e., winning the world for Christ and meeting human need in his name), and are overwhelmed and immobilized by the apparent impossibility of achieving our objectives. We stare in wide-eyed, petrifying panic at a sinful, self-destructing world, and are convinced in our innermost being that we are fighting a losing battle.

Satan appears to be winning on every side, and we cry out for reinforcements that we don’t really expect to show up. We dream of a world at peace, and wake up daily to a nightmare brought home to us in living color by the relentless and depressing reports of the news media. We want to retreat into a protective cocoon of home and family, to leave the ills of the world to be solved by someone better prepared to deal with them, but no one is stepping up to take up the fight. We want to cry out with Elijah, “I have worked very hard for the Lord God of the heavens; but the people … have broken their covenant with you … and only I am left” (1 Kings 19:10 TLB).

I wonder sometimes if we think we would be happier to be David, playing his harp and singing the Lord’s song as he cared for the flock in his care, rather than to be like the David who took only his sling and a few stones to face the fearsome Goliath, representative of the might of the Philistine military, because he was convinced that his God was ready and able to overcome the enemy. And all this assembly shall know that the Lord saves not with sword and spear; for the battle is the Lord’s, and he will give you into our hands (1 Sam 17:47 AMP).

Sometimes we forget that young David challenged not only the mighty Goliath, but the might of the entire military force of the Philistines. He was so certain that the outcome of the battle was entirely in the hands of Jehovah God that he refused the protective armor King Saul tried to force on him and actually ran toward the battle line to confront Goliath! David knew without doubt that God was able to use him, an adolescent untrained in the art of war, to do the impossible! Goliath was brought down by a single stone, slain with his own sword, his army was fleeing in panic—all because a boy trusted God to defeat an apparently invincible army.

David understood clearly the situation. It was unreasonable to believe that a boy could defeat a mighty army—but God is not limited by the perceived “reasonableness” of any situation. He was—and is—capable of  bringing glorious victory over a seemingly insuperable foe.

In those moments when we gaze upon a lost world and sigh at the enormity of the task, when we weep helpless tears and fear that the devil is gaining the upper hand—when we throw up our hands, and say, “Lord, I just can’t!”—that’s when the Lord reminds us: The battle is the Lord’s!

So, we assess, we analyze, we plan, engaging God in every detail. We recognize the enormity of the challenge, and strategize to break down the immense task into doable steps. And then, armed with the grace of God and the power of his Word, filled with renewed vision, we march out to confront the enemy and reach the lost with his message of love. We cannot, in good conscience before the Lord, do otherwise.

I can’t do everything, but I can do

And what I ought to do,

by the grace of God, I shall do. 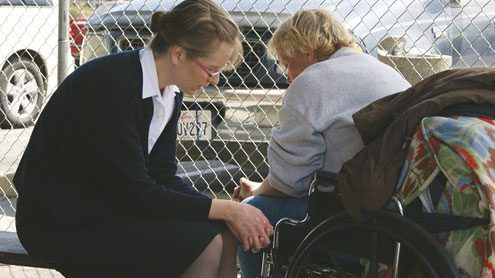