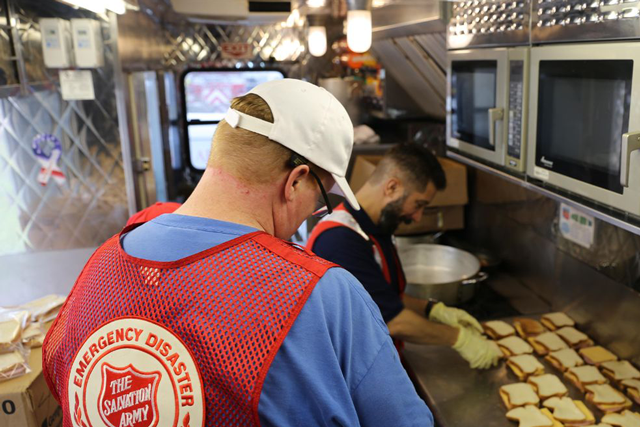 The Salvation Army responds to catastrophic flooding in Texas

Volunteers prepare to serve over 130 people dinner at the Harbor Light men’s shelter in Houston.

“As the situation in south Texas continues to worsen following Hurricane Harvey’s landfall, The Salvation Army has activated all of its United States and Canadian emergency disaster response assets,” said Major C. Mark Brown, Director of Business Operations for The Salvation Army Texas Division. “These units are able to provide food, shelter and emotional and spiritual care to those impacted by this ongoing devastating weather event,”

Salvation Army locations in Houston and the surrounding areas are providing food, shelter and clothing in response to dramatic flooding in the city.

The Harbor Light Center in Houston is housing over 400 men and more than 100 women and children are at the Family Residence shelter. Many people in the community arrived at Salvation Army shelters in the back of dump trucks after being rescued from the rapidly rising flood waters.

More than 3,000 meals, snacks and drinks have been served so far. Incident command teams from Arkansas and Oklahoma and 10 additional mobile kitchens arrived in Corpus Christi on Aug. 27 to begin service. An incident command team from Florida is currently traveling to support the relief efforts in Houston as well.

Salvation Army mobile canteens and personnel are delivering service to the affected areas as communities along the coastline become accessible. The Salvation Army will continue service to first responders and residents for as long as needed.