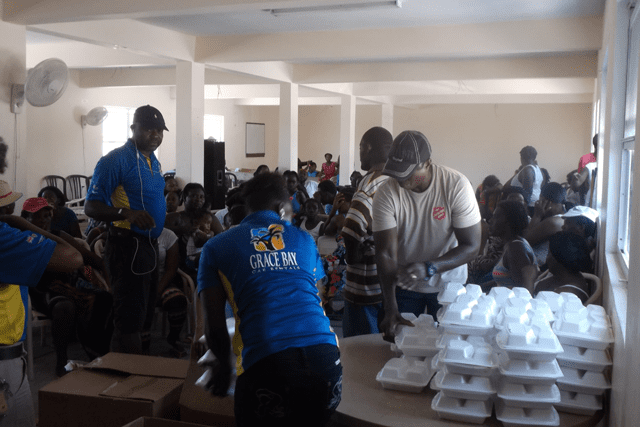 Category 5-rated Hurricane Maria is passing through a swathe of Caribbean islands, many of which had already been severely damaged by Hurricane Irma. The storm, with wind speeds of 160 mph, has made landfall in Dominica, and is threatening catastrophic damage and storm surges in its wake. The storm’s current track puts the Virgin Islands, Puerto Rico and the Turks and Caicos islands most at risk. On St. Thomas in the U.S. Virgin Islands, The Salvation Army USA Eastern Territory has partnered with the Reformed Church to feed 1,500 people and has provided resources for the church to offer food and supply boxes to local residents. Trained disaster volunteers are going through the most remote regions to feed and check on those who have been without basics since Irma struck.

Captain Christa Bryan, Regional Coordinator for the Puerto Rico and Virgin Islands Division, said: “Our little island cannot handle another storm… There are very few safe structures left that can handle even the smallest of storms.”

She described the effect Irma had on the island.

“What was once lush and green now looks barren and bleak. Building collapses, missing roofs, trees and power lines down everywhere; what was once green is now brown,” Bryan said. “[The hurricane was] an experience I never want to [go through] again, but one I’m grateful for God being in the midst of.” “To hear their voices, to see them [again] brought much-needed relief,” she said. “We lost everything to Irma, both at home and at the corps, but God saved our lives, and that tells me he is not finished with us yet. Please pray for our island. Pray for us as we continue to heal and to provide spiritual care for our people and those we serve.”

In Puerto Rico, The Salvation Army’s disaster services team has been meeting regularly and will continue to prepare and plan for the effects of Maria. Shipping has been a major logistical challenge, but The Salvation Army is working with UPS and local partners to send containers of water, food and vital supplies to St. Thomas, as well as to St. Croix and St. John. The concern throughout the division is the impact that Maria will have on an already-damaged infrastructure. Parts of Puerto Rico remain without power, and the damage to phone and power lines in the Virgin Islands is so extensive that it will be months before a reasonable level of service is restored.

On the island of St. Lucia, Prime Minister the Hon. Allen Chastanet has requested a regional response to assist neighboring islands that have had infrastructure and supply chains disrupted. In the capital, Castries, The Salvation Army has deployed personnel to assist the National Emergency Management Organization with the distribution of supplies. It has also supplied 100 clean-up kits that have been dispatched by ship to Tortola in the British Virgin Islands.

The Salvation Army’s Caribbean Territory has also been working closely with the Turks and Caicos Islands (TCI) Government. The capital, Provdienciales, has been divided into three zones for relief purposes, with the disaster response in the largest of these—Five Cays—being allocated to The Salvation Army. The team has been bolstered by ten additional volunteers, and staff from the company owned by The Salvation Army’s local advisory board chairman. TCI local authorities have provided a community center to act as a distribution point for food, water and other vital supplies, and 900 meals a day are being provided. Salvation Army team members in TCI will be visiting emergency shelters in the Five Cays area to assess how many people may be able to return to their homes and what support will be necessary for this. At present, the emergency shelters are predominantly in school buildings, which means that children are not currently able to access their lessons. The Bahamas divisional headquarters, which oversees the work in TCI, is acquiring cots, bedding kits, tarpaulins and flashlights to assist in the recovery efforts.

In St. Maarten, The Salvation Army has been assisting 35 people who are accommodated in its temporary shelter and also providing help in the surrounding neighbourhood. Corps Officer Captain Lapaix reports that counseling is being offered to hurricane victims, but that the work is “overwhelming and the needs are many.” To compound issues, there is sporadic unrest on the island. A collaboration with LDS Charities has ensured that The Salvation Army has secured access to a shipment of pallets of drinking water and non-perishable food. The Salvation Army will distribute 1,700 hygiene kits enroute from Guyana to St. Maarten. The Salvation Army in Antigua, which has received evacuees from nearby Barbuda, has also formed a team to offer counseling. The evacuated families and individuals will be unable to return home for a long period, so The Salvation Army is continuing to provide food, cleaning and personal care items. Plans are being formulated to arrange occasional returns to the Island to facilitate clean-up and salvage.

In the Bahamas, Ragged Island, Bimini, Inagua, Mayaguna and Acklins were the islands most severely impacted by Hurricane Irma. Thousands of people evacuated to Nassau before the storm hit, and damage in the communities they left has been catastrophic. As with Barbuda, Ragged Island is currently uninhabitable. The Salvation Army’s Caribbean Territorial Headquarters will coordinate with the government and non-governmental partner agencies to discern how best to assist.

From reports by Caribbean Territory and USA Eastern Territory