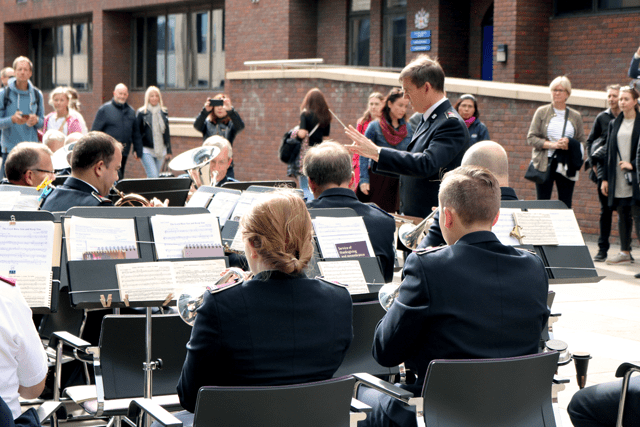 As London celebrated 25 years of Open House, the initiative that offers members of the public the opportunity to visit the best buildings in the city, The Salvation Army International Headquarters (IHQ) welcomed hundreds of visitors to learn more about the building that has become a familiar sight in London since it opened almost 13 years ago. Chaplain Major Peter Mylechreest arranged the day, assisted by officers and employees who welcomed many people into the IHQ building where they had the opportunity to view the ground floor rotunda and conference rooms before making their way to the first floor, which houses the offices of the General and the Chief of the Staff.

Several visitors had their picture taken in the General’s office, with some sitting at his desk. Colonels Knud and Lisbeth Welander welcomed people to the neighboring International Chapel, explaining how it provides a place of tranquillity within the workplace and also pointing out the architectural features, particularly the louvred glass of the window, which reflects the sky, and the amber-colored glass walls that in hours of darkness create a glowing light above the entrance to the building. Representatives of the building’s architects spoke to visitors about the pillars of the building and how they not only support the upper floors, but also reflect the helping hands of The Salvation Army. On the second floor—home to IHQ’s zonal administration—The Whole World Mobilizing team had created a photographic exhibition depicting the many ways in which The Salvation Army around the world has responded to the Mobilizing challenge to take the gospel out into communities and share faith in creative and relevant ways. Many visitors expressed an interest and wanted to know more about this initiative.

Throughout the day a new video, “Building for Mission,” played while people waited to join a tour group. It shows Andrew Chadwick, of architectural practice Chadwick International, talking to Commissioner Charles Swansbury (International Secretary for Program Resources) about the vision behind the building. The Commissioner was also on hand to explain more in person, and architects from Sheppard Robson spent the day accompanying tour groups. Major Beverly Ivany, writer of the Army’s devotional publication Words Of Life, signed copies of the latest issue as she met visitors to the building. A further attraction was the contribution of Regent Hall and Croydon Citadel Bands, which supported the event by playing in front of the building. As people approached many stopped to listen and some decided to go inside. The sound of the bands also provided a perfect backdrop as visitors were shown round the building.

On the lower ground floor, apart from refreshments served at Café 101, there was an exhibition by the BT/Post Office Art Club. Tours finished here with an explanation of how the building had been designed in such a way that even the floor below ground level has natural light.

Some visitors were interested to discover that The Salvation Army was not just a charity but a church as well. People asked many questions, including wanting to know which countries the Army serves in, whether there are places where it is not accepted, how the IHQ building is funded and how long a General is in office. As the visitors concluded their tour of the building they could take free copies of selected Salvation Army books and publications. Many expressed appreciation for the opportunity to learn more about IHQ and also about the international Salvation Army and its ministry to the whole world.

“Building for Mission,” the video about the ideas used in the design of the new IHQ building, can be viewed and downloaded for sharing offline at sar.my/buildingformission