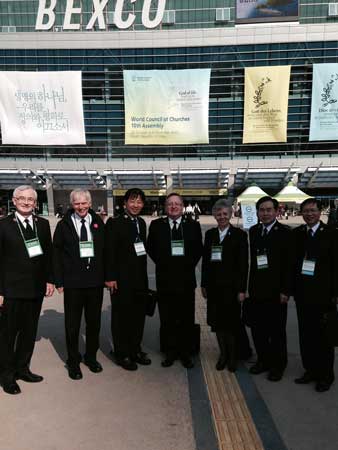 At the conclusion of the 10th Assembly of the World Council of Churches (WCC) in Busan, Korea, the thousands of participants made their way home pondering the meaning and implications of their 11 days together. The assembly was a unique gathering of Christians from around the world representing hundreds of different denominations. The theme, ‘God of Life, Lead us to Justice and Peace’ was evident throughout all events.

They were joined by Korea Territory officers Commissioner Park, Chong-duk (Territorial Commander), Colonel Kim, Pil-soo (Chief Secretary), Major Son, Suk-young (Divisional Commander, Kyung Nam) and 27 cadets who were present for the opening ceremonies. Included in the hundreds of volunteers assisting at the Assembly were a number of Salvationists from Korea, Norway and Africa.

The assembly elected a 150-person central committee which will serve as the decision-making body of the WCC until the next assembly takes place in seven or eight years. The new committee is made up of 39 per cent women/61 per cent men, with 13 per cent youths, 5 per cent being indigenous persons and 2 per cent persons with disabilities. Sixty-eight per cent of the committee are ordained, with the rest being lay persons.

The assembly took action by adopting statements and minutes on issues including peace and reunification of the Korean peninsula, the politicisation of religion and the rights of religious minorities, human rights of stateless people, and working towards just peace.

Among other issues raised, delegates expressed concern about the Christian presence and witness in the Middle East and the situation in the Democratic Republic of Congo.

More information about the 10th WCC Assembly, including the full text of all its statements, can be found at https://wcc2013.info/en

Salvationists from around the world will readily identify with the concluding prayer of the assembly:

lead us to justice and peace,

that suffering people may discover hope;

and divided churches become visibly one,

through the one who prayed for us,

and in whom we are one Body,

who with you and the Holy Spirit,

is worthy to be praised, one God,

Photos of Andy’s visit to International Headquarters are on the IHQ Flickr feed at sar.my/wccbusan2013