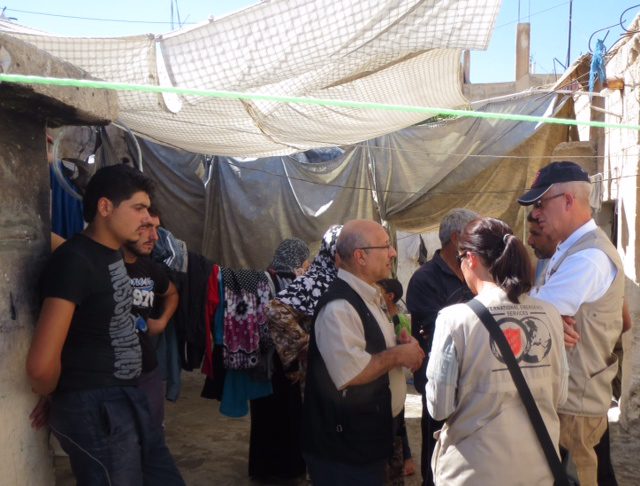 For more than three years, civil war has torn the country of Syria apart, resulting in an estimated 150,000 deaths and forcing millions of people to flee their country for safety. More than one million have journeyed south to Jordan, where many live in desperate poverty. In the past year, The Salvation Army’s international emergency disaster services stepped in to provide much-needed assistance. Major Ray Brown, international emergency services coordinator, recently explained the Army’s projects:

How did The Salvation Army get involved with helping Syrian refugees in Jordan?

In March 2013, Major Cedric Hills, Envoy Gordon Lewis and I conducted an assessment visit to determine whether Salvation Army work would be feasible in Jordan because there was no Salvation Army presence there. We wanted to have a look and see if we could do anything because the Syrian crisis was ongoing and still is to this day. We discovered that the Lutheran World Federation (LWF), a faith-based non-governmental organization (NGO) that has a long-term office in Jordan, would be happy to work with us, so we started to work out the projects from there.

We deployed two teams of two for a couple of months each last fall. They were there to work alongside the Lutherans on five projects. Three of the projects involved distributing winterization kits to vulnerable families. Through the three projects combined, 1,000 families were given kits that included a heater, gas bottle, vouchers for six gas refills to get through the winter, blankets and carpets, as many families live on concrete floors. Families with children also received a warm tracksuit for each child. It gets very cold there—that surprised me. There was deep snow when one of the teams was there, which you don’t expect when you think of Jordan; you think of desert.

The other two projects will help with the huge demand for education among the Syrian refugees because the schools close to the border have been overrun by the demands of the people. We built permanent, proper classrooms at two schools. Six classrooms were constructed at one school, and three classrooms at the other. These projects are relatively small compared to the size of the emergency, but they mean that 290 more children will be educated. We visited these schools and they are very well ordered, but overcrowded and desperately short of the facilities that a lot of the western world would take for granted. The schools typically have a waiting list, which is why we decided to work there. Both of our classroom projects finished at the end of May. We met some of the teachers at the schools and they are so pleased that they’ve got this extra capacity.

For The Salvation Army, what is the advantage of working with an NGO like the Lutheran World Federation?

With the LWF, we were easily able to connect directly with the people they work with. So in terms of sustainability, we weren’t choosing people out of the blue; we had a targeted population, which was really helpful. The registration process for the winterization kits was excellent. All those goods went into the hands of needy people.

When many people think of refugees, they think of camps. Why did The Salvation Army decide not to work in the camps?

We decided to work in the host community because 75 percent of the refugees don’t live in the camps. They live among the Jordanian people. In fact, a lot of them live among the poorest Jordanians. Jordan is not a rich country. It hasn’t got natural resources that some of the other Middle Eastern countries have. The main refugee camp, Zaatari, is now the fourth-largest city in Jordan, and many people come through the camps, but choose not to live there.

That choice, however, has its own problems. The rents have gone up. There’s very little capacity left. And the employment situation is becoming difficult because Syrian refugees are willing to undercut the cost of labour. At the low end of the market in Jordan, Egyptians would come in to do a lot of the manual work. But they’re being undercut by the refugees so there are some tensions.

What are the conditions in the area where The Salvation Army is working?

We’re working in the Amman area [capital of Jordan] and up to the border. It’s obvious that there is a huge refugee problem. As you go toward Syria from Amman, it becomes clearer that people are living in more poverty. There’s more pressure on facilities and infrastructure, schools are overcrowded and there’s more people hanging about because they’ve got no work to do.

As you go further north, you spot ‘informal communities,’ which is where refugees have come over the border and set up their own small camps. We visited one bearing in mind that these people have been there for up to two years now; they’re living in homes made of canvas and cardboard walls. They have very little in terms of wash facilities such as latrines and washing-up bowls.

The poverty line in Jordan is 68 Jordanian dinars [USD $96] a month; these people live on about 24 dinars [USD $34]. So they are very, very poor. But at the same time, to visitors like ourselves they are extremely generous. When I was there in March, we went into an informal community and to a home where about nine people lived. There were about 50 people jammed in the house and, all of a sudden, this tray of tea arrived just for us. They’re so generous and yet so needy.

What did you take away from your visit to Jordan?

The downside is that the problem of Syria hasn’t gone away. My conclusion at the end was, it’s such a massive problem that you can’t see an end to it. You come away a bit despondent because it’s not finished. The world’s attention on troubled spots and disaster areas—whether it’s Syria, the Philippines or Ukraine—only lasts a little while. But the problem is long-term in Syria. That’s one of the reasons why two of our projects focused on education; it’s a long-term project.

About 1.2 million refugees have gone into Jordan from Syria, and about 700,000 of them are still living there, as some have come and gone. The needs are massive. Some of them are little things that you wouldn’t necessarily think of. For example, they were desperately short of underwear and shoes. Another area that has been neglected is aids for people with disabilities—wheelchairs, walking sticks and so on. At The Salvation Army’s emergency disaster services, we look for ways to add value to a situation and identify gaps of provision. We don’t try to cover everything; we try to be selective and strategic in what we do.

How can Salvationists help support the Army’s international relief efforts?

As emergency disaster services based out of International Headquarters, we go out into the field and do our monitoring and assessments and we work out what we can do. We do that on behalf of The Salvation Army as a whole so we feel that everybody is part of our team. So the best thing that Salvationists can do is support their territorial world missions department—financially, but also prayerfully. Salvationists can be confident that we work hard to maximize the impact of their donation. One of the strengths of The Salvation Army is that we’re in 126 countries—that’s a very powerful thing.