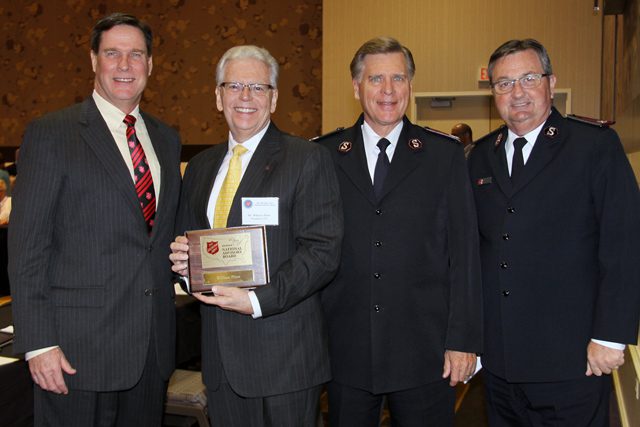 National Advisory Board convened in April

The Salvation Army National Advisory Board (NAB) met April 16-17 in Kansas City, Mo., for meetings hosted by the Central Territory and the Kansas and Western Missouri Division.

During the opening plenary session, National Commander Commissioner David Jeffrey installed Bill Flinn, CEO of the Pasadena Tournament of Roses since 1997 and its executive director since 2012, as a new member. Flinn, a soldier and bandmaster at the Pasadena Tabernacle Corps, is the first Salvationist member of the NAB.

In the same meeting, Bob Byers, founder and owner of Byers Choice Ltd., was named a NAB Life Member. A long-time and generous supporter of the Army in the Philadelphia area, Byers served two nine-year terms on the NAB. He joins an elite “Life” group that includes only three other NAB members: Ruth Altshuler, Ralph Glendenning and Margot Perot.

At a breakfast for local community leaders that preceded the NAB meetings, Jeffrey presented Don Hall, president and chief executive officer of Hallmark, with an Others Award for his corporation’s generous commitment and dedication to The Salvation Army for decades.

During the two days of meetings, great emphasis was placed on the Pathway of Hope, a program first introduced by the Central Territory and designed to break the cycle of poverty in America. The innovative concept is being replicated throughout other territories as fundraising and promotion continue for this unique approach to meeting social service needs.

“Our Western Territory has committed tremendous resources to next year’s NAOC,” said Western Territorial Commander Commissioner James Knaggs. “We believe in the value this conference brings to everyone involved with the Army and are delighted to play an instrumental role in developing and producing the look of a conference that will not only showcase the talent and heart of the Army but serve as a springboard to strengthen every aspect of The Salvation Army.”

The next meeting of the NAB will be held September 17-18 in San Francisco.