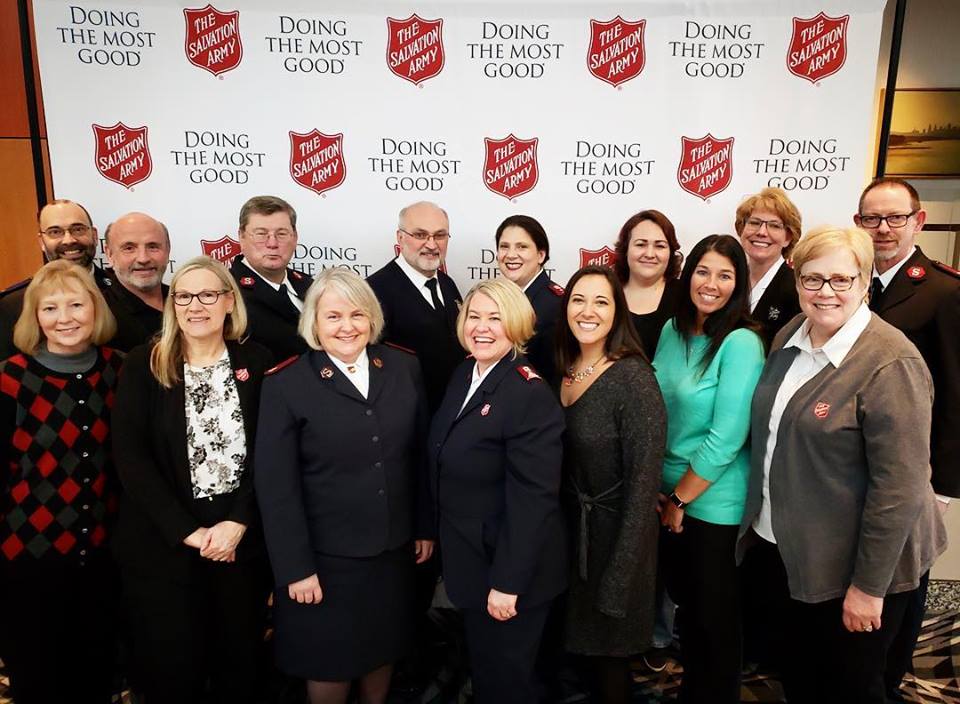 Delegates took part in a total of more than 80 workshops. Commissioner Brad Bailey, Central Territorial Commander, issued a reminder at the welcome dinner that effective social service work must always be about the population The Salvation Army serves, more than how it goes about serving them. “Our Salvation Army DNA hasn’t changed,” he said. “Together we have acknowledged that we are in the battle. We are in the battle to eradicate extreme and intergenerational poverty, social and economic isolation, human trafficking, racially and politically motivated migration, genocide, bigotry, and relativism in a post-modern, narcissistic and self-absorbed new age. The focal point of ‘charting change’ must emphasize the person over the process. And that’s what the founders of The Salvation Army declared and modeled when they expressed their conviction that God raised up our movement to enter into partnership with him and his desire for us to engage others in a ‘heart to God, hand to man’ type of framework.”

In her plenary session, Dr. Christena Cleveland, a social psychologist and professor at Duke University’s Divinity School, spoke about gender, equality and the Church’s role in racial reconciliation. She cautioned against slipping into ontological expansiveness, or the idea that we tend to act and think as if all spaces—whether geographical, psychical, linguistic, economic, spiritual, or otherwise—are or should be available for us to move in and out of as we wish. It’s an idea, she said, that points up the importance of active listening, particularly in spaces where social work can take place. “It’s this idea that ‘I get sex trafficking. I watched a documentary on sex trafficking.’ The problem is that, that idea is typically reserved for people who are white,” said Cleveland, whose book “Power Trip: How Facing Inequality Sets Your Free” is set to release later this year. “The idea that I can master anything. I can become an expert on anything. If I’m a monkey, and I have no idea what it’s like to live in the ocean, no idea what it’s like to become a fish, but I say ‘this is what the fish is experiencing, this is what the fish needs.’ And I can become such an expert on being a fish, that I don’t even have to talk to the fish.”

At the awards ceremony, National Headquarters handed out its social services awards and $5,000 to each of its recipients. Winners from the Western Territory included the Life Empowerment Program in Helena, Montana and Jean Watkins, Director of Social Services for The Salvation Army of Orange County.

To cap the week, Commissioner David Hudson, Salvation Army USA National Commander, issued a charge to all in attendance, imploring them not to lose sight of the mission. “I’m often asked by people ‘what’s the secret of The Salvation Army?’ We’ve been around for over 150 years. In that time, there have been thousands of nonprofits and charitable groups that have come and gone. So when I think about the secret, The only thing I keep coming back to is our enduring mission: to preach the gospel of Jesus Christ and meet needs in his name without discrimination. I remind our people at NHQ on a daily basis that our mission is not two parts—it’s one mission statement. If we don’t do half of the mission, we do a disservice to the entire thing. We as an army, and specifically you, are giving hope to people every day, and you’re letting them know that there’s a possibility for something better. And you’re doing it every day, in his name.”

The core of all social work, he added, goes beyond just helping clients gain access to resources—it restores hope, something that’s never in short supply.
“The one thing that the U.S. will need more in the future than it does currently is hope. People are losing hope. Between the political turmoil, the partisan venom, the face of catastrophic disasters, and the epidemics of addiction and mass shootings, God calls us to be his light in the world, to give hope to those who have no hope, to let people know that there’s a possibility for them to have a better tomorrow. No matter the circumstances, no matter the environment, we must continue to be his vehicle, his vessel for grace to the lost in a dying world.”