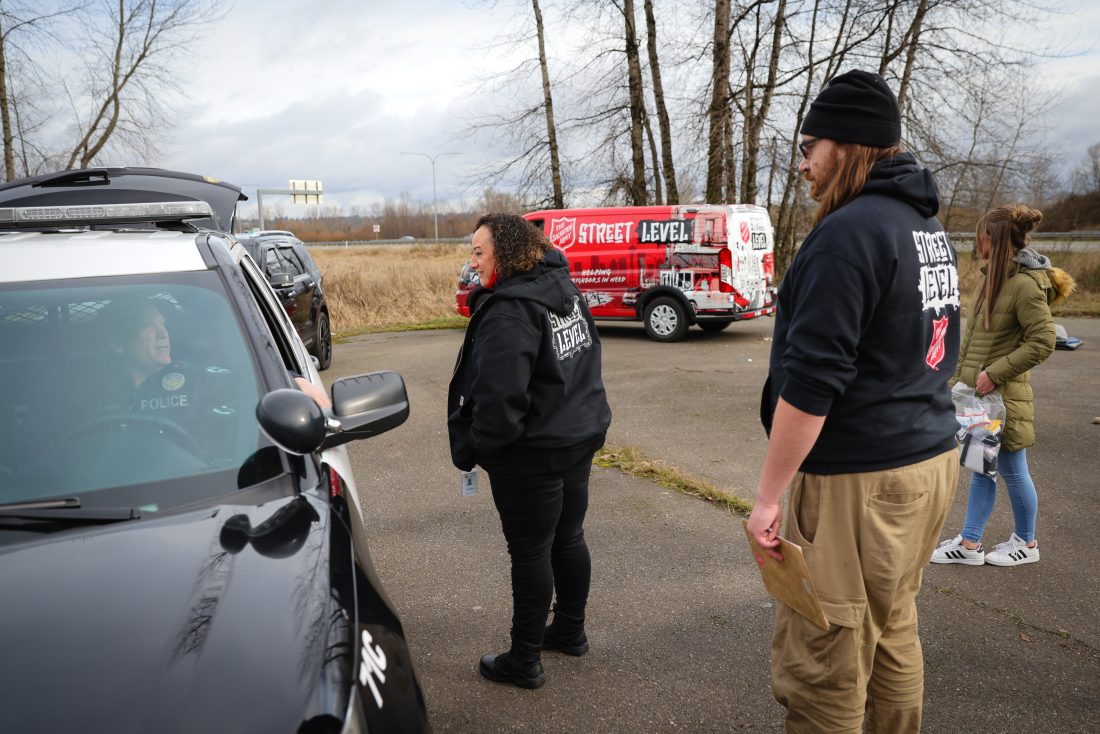 “This is severe,” says Street Level Program Manager Tina Lewis as we drive the dirt road alongside the Washington 167 embankment in Auburn, Washington. “These are new people.”

An encampment comes into focus—mountains of belongings spill out of a pair of RVs and parked cars. Small dogs run toward the caravan—Lewis’ black Ford Explorer, an Auburn Police Department patrol car and The Salvation Army’s Street Level van.

“Don’t let me clip one of those dogs,” Lewis tells one of the officers.

These people will soon have to relocate—they’re trespassing. Lewis and the Street Level team are here to help before they’re forced out. She walks toward two men rummaging through belongings and introduces herself. She hands them her card and starts asking questions, trying to gauge their situation and what the next step on the journey to being housed would look like for them. 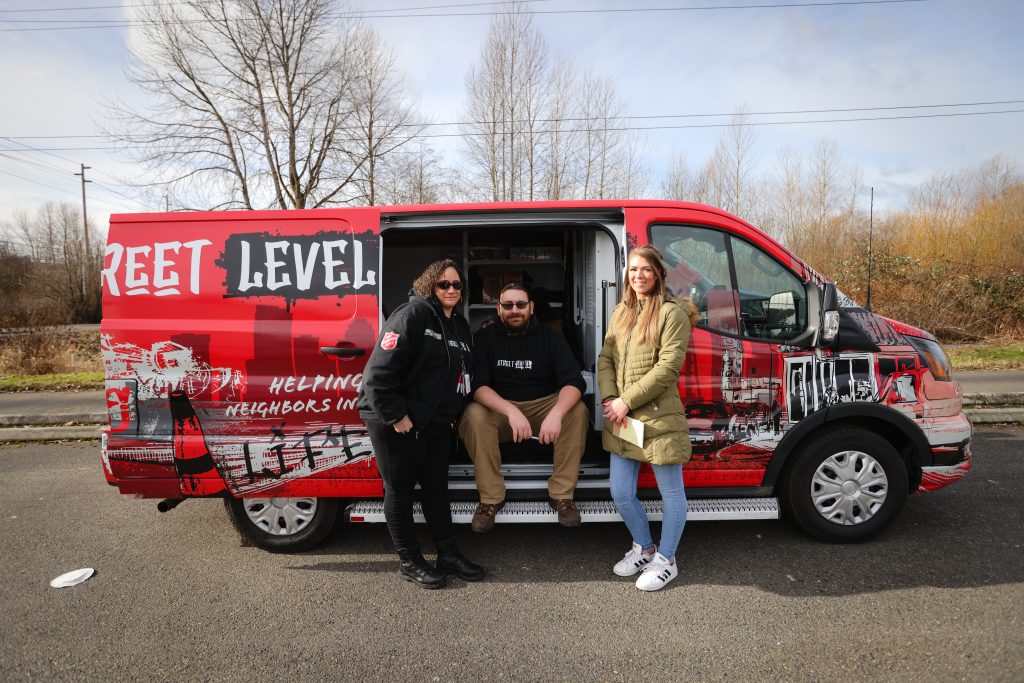 The answers vary. Sometimes it’s something like getting a car key replaced that would allow someone to work again, other times it’s getting an ID or finding the right landlord who would work with someone with an eviction in their past. But during the Street Level outreach days, Lewis and the team work to engage those living in vehicles by meeting immediate needs through items like snacks and hygiene kits and identifying next steps. They’ve found that while resources exist, it’s often the process of obtaining them that’s filled with barriers. Street Level addresses this head-on.

The Street Level program began operating in 2019, building off the work of Major Phil Smith, who began the outreach by walking the street with a carafe of coffee in a backpack. The team has helped more than 400 people gain permanent housing since its inception—and 97 percent remain housed.

“It’s about identifying what are your challenges to get in and then walking you through that until you’re successfully housed, and then maybe even supporting you a little bit while you’re continuing to do the other steps,” said Northwest Divisional Commander Lt. Colonel Cindy Foley. “So, to me, that’s the secret sauce of Street Level: We’re going to people who are never going to find us…And then we walk with them on that journey until they’re successfully housed.” 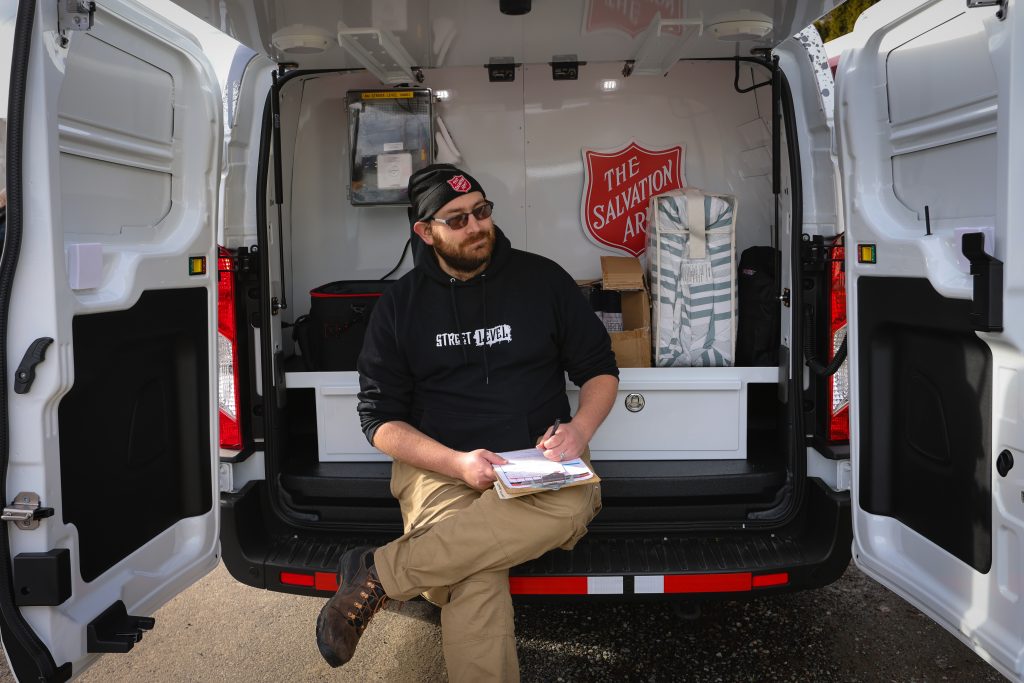 The Street Level program in King County has served as the model for homeless outreach and has been replicated throughout the Western U.S. The Salvation Army secured more than $1 million in grant funding from Dignity Health in 2020 to expand the program to four California communities. Now there are six other locations that have secured support to purchase vehicles and hire staff to further the impact in California, Oregon and Arizona.

This year, funding from King County has allowed the team to expand its staff and operations. Additionally, private donors have funded three additional vehicles. The team affectionately refers to the vans by name, and they each have cartoon dog namesakes, beginning with Clifford, the original, and newer additions, Dino and Goofy.

With new vans and a larger team, Street Level will expand beyond its presence in South King County into other areas like Bellevue, Kirkland, Redmond and other parts of unincorporated King County surrounding Seattle, where the 2020 Point-in-Time Count found more than 11,500 people experiencing homelessness on a single night in January—and 47 percent of them were unsheltered. Notably, that’s before the pandemic and resulting hardships, like an inflation-fueled increase in rent. 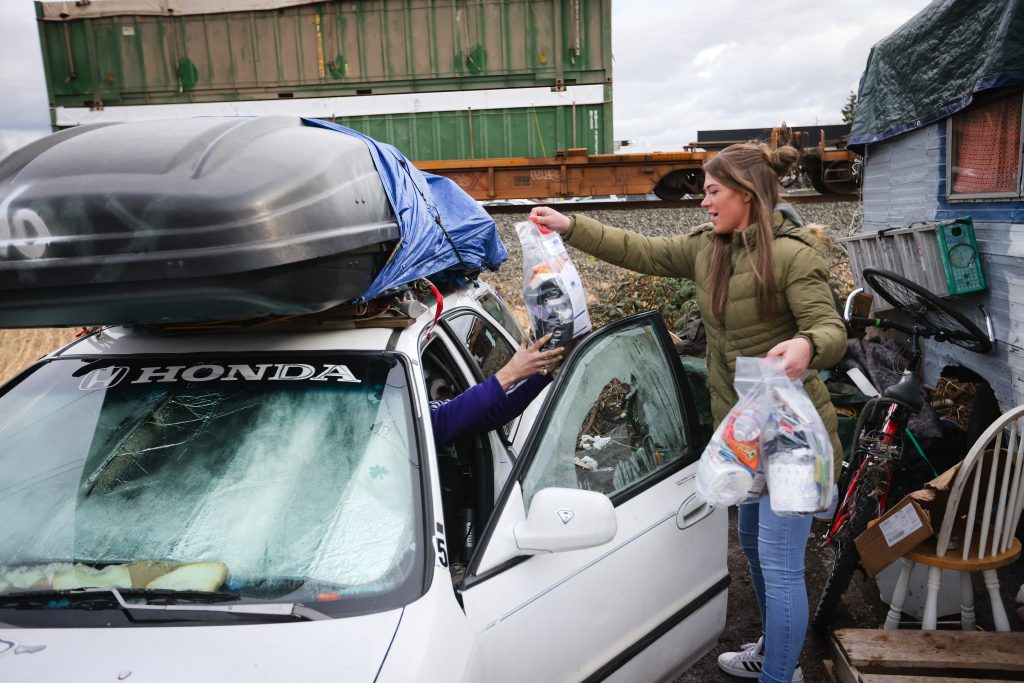 “Scripture tells us there will always be need, but being able to be more efficient and effective in the way that we meet needs, in Christ’s name, and reaching out to them to address both their spiritual needs as well as their physical needs, is what sets The Salvation Army apart,” Foley said. “When you add effective tools like Street Level and passionate committed disciplers, like Tina, then you know you’re seeing the Lord’s work in action.”

“Disciples” are what Lewis refers to her growing team as—she’s training them so Street Level can effectively meet more needs as it expands.

“God has handpicked each one of these five new members of this team,” Lewis said. “He just sent me to bring them on.”

In addition to the new vans and team members, the Street Level program is adding a centrally located building to help with case management. Lewis said the population of those experiencing homelessness varies by area in both size and lifestyle throughout the county. In some cities, fewer people live in cars than those who live on the ground or in tents.

“One day, we might come out here and not be able to find a single soul in their car. And then the next day…it’s like, where did they all come from?” Lewis said. “And then we know our regulars that we’ve been working with for the last couple years. Some of them have no desire to change their living situation; they’re choosing to live like this. Well, it doesn’t make me stop.

For Lewis, it’s personal. “I run into a lot of my past on these streets,” she said.

She was a collegiate volleyball player on scholarship, got mixed up with the wrong crowd and became addicted to drugs. This led to homelessness, a list of drug-related felonies and losing her kids to Child Protective Services (CPS). She’s been there.

For Lewis, the turning point was going to prison along with sustaining injuries—falling, breaking her arm, tearing her ACL—and needing multiple surgeries. She said God slowed her down. “I had time to sit there and then I got the will to fight,” she said.

Now, with 22 years of sobriety, she finds strength in giving away her story—and it resonates with those she encounters through Street Level. “When I tell them what I’ve gone through and the tears come in, it just shows them, man, I can do this,” she said. “I’m out here because I’m telling you that I was you.” 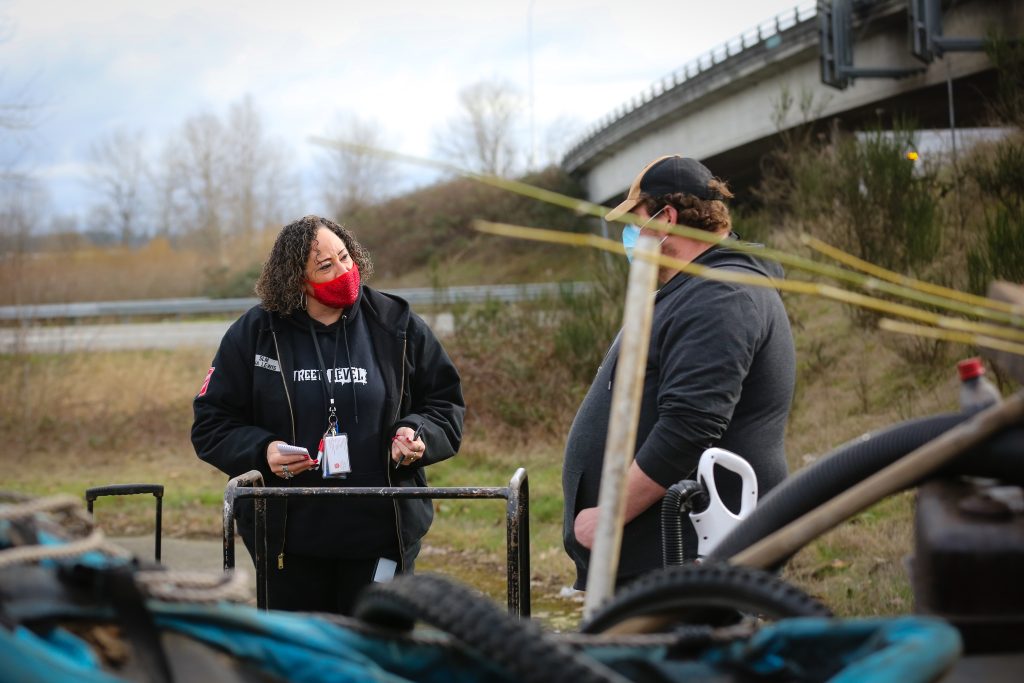 Before coming to The Salvation Army, Lewis worked in social services and was known as a resource builder. She was in-between jobs when she got a call from former Northwest Division Director of Outreach and Engagement Mickey Jordan about launching Street Level after a former colleague passed on her name. She hadn’t done outreach before, but it all seemed right. She was in.

Outreach and Community Engagement Specialist Jonathan Schultz joined the Street Level team six months after Lewis did after working at a shelter in Seattle. Through it all, his favorite part is seeing how God works.

“I get to be here and I get to pray with people. I get to pray for a ton of people,” he said. “Seeing God answer prayer time and time again—even my own prayer that I can be a blessing to somebody else—that’s really encouraging…That builds so much faith.”

Once, Schultz was in a fast food restaurant with his now wife after a series of events took them out of their normal routine. The woman behind the counter spotted The Salvation Army shield on his hat and told him she was homeless and lived in her car—she needed to talk to them.

She was at the end of a rope, and didn’t know what to do. She didn’t know how to get a place. She was having suicidal thoughts and prayed that God would send her help, Schultz said. “And that night I show up.” 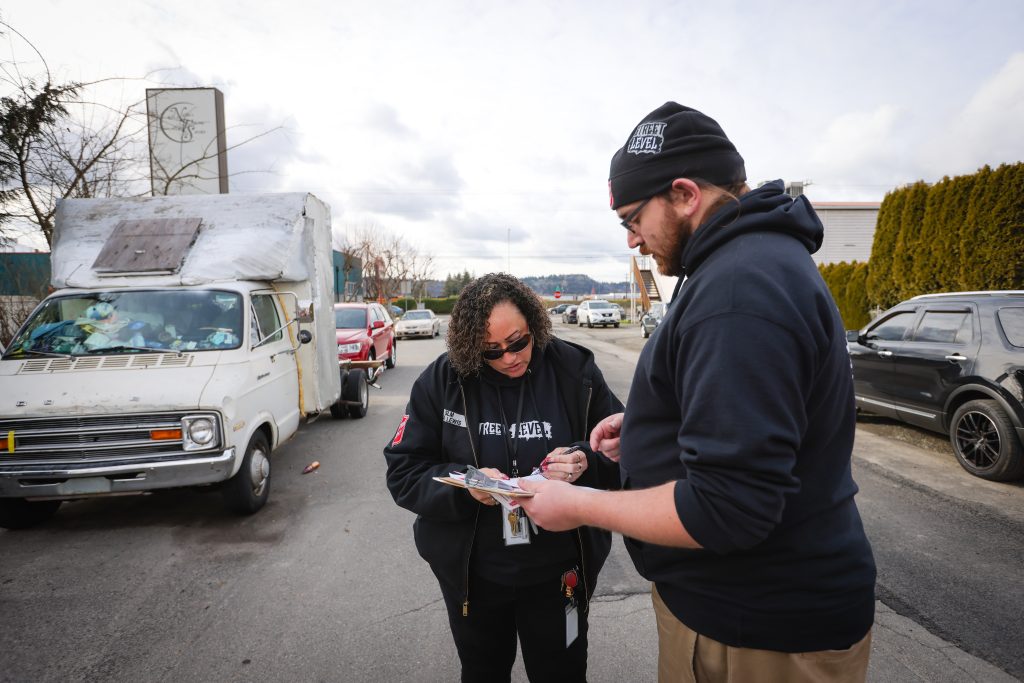 The pair worked together for months to get her housed. Finally, in early March 2020, she secured a place in Everett and Schultz helped her move in as the coronavirus started to creep into headlines.

During a typical Tuesday outreach day in Auburn, the Street Level team is joined by the Auburn Police Department as they caravan from the embankment encampment to a Park and Ride to streets with businesses and homes and a city park. They’ve been a faithful partner since the beginning—going out every Tuesday.

“It’s a really good partnership because we have this…different approach to coming out and talking to people,” said Patrol Officer Stephanie Bennett, who joined the four-person Community Response Team six months ago. “We pass out a lot of her cards when she’s not with us, and the nice thing about coming out with them is we can say, ‘Hey, do you want resources here? They are right here.’” 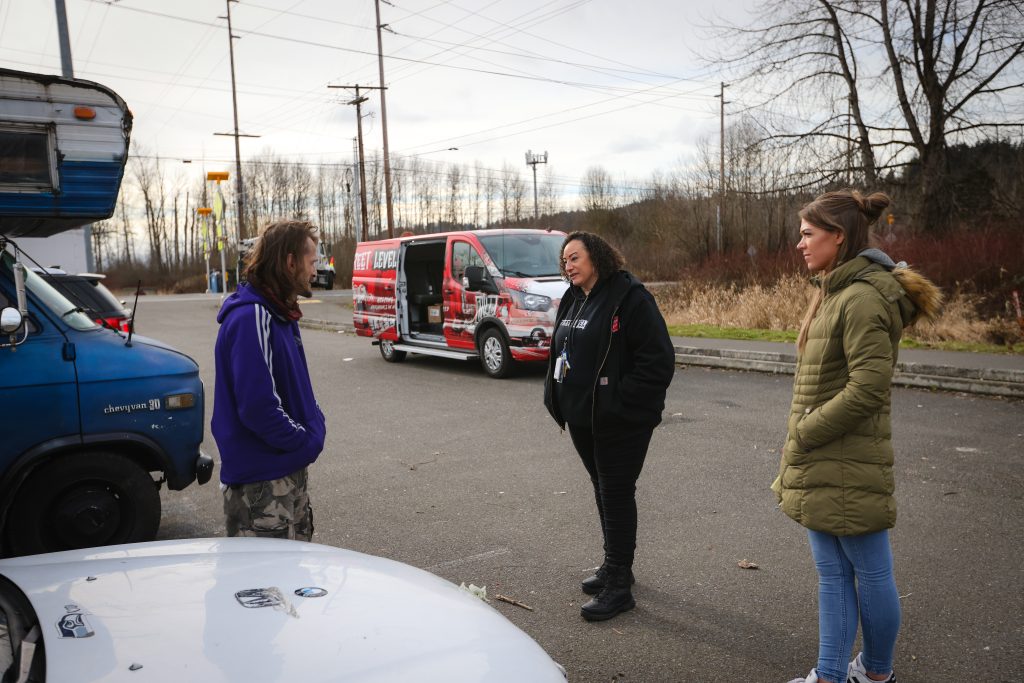 On a city street in Auburn, a man runs to catch up with Lewis as she knocks on the door of an RV parked on the street in Auburn. His message? “Thank you.” During Christmas, Lewis worked to house him and 76 others in hotels when temperatures dropped to record-breaking lows.

“Right around that time when that snow hit, I thought I was gonna die,” Curtis Leikness said. “If it wasn’t for her, we probably would have…It was that cold out.”

He’s ready to get off the streets, he tells Lewis. “Let’s get moving,” she said. Lewis starts calling up shelters to see if any beds are open. Barrett and the Street Level team hand him a bag with hygiene and snack items for the meantime.

Most days, Lewis’ phone starts ringing around 6 a.m. with calls from clients and partners—really anyone who’s gotten her card—and doesn’t stop. She answers it, too—she believes if someone had reached out to her, things would have been different. Even when she’s off the clock, she said she can’t help herself if she spots someone. Her kids have gotten used to it.

“Just one more,” Lewis said. “I don’t even know what drives me anymore other than I’ve learned to surrender… I’ve learned that I’m not in charge. There is another path for me.”