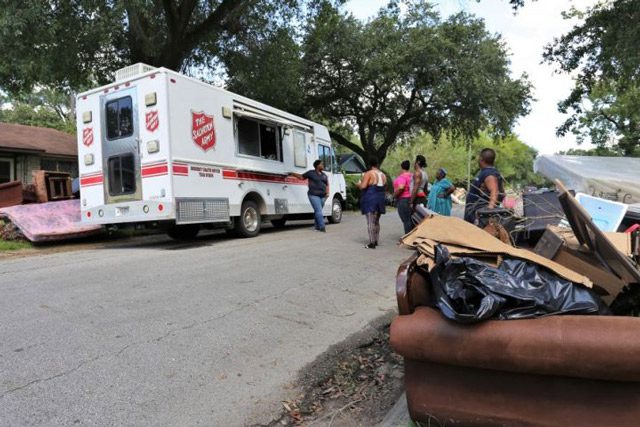 Salvation Army units in Southeast Texas have been out in their respective communities delivering practical support to those affected by flooding from Tropical Storm Imelda.

As residents work to clean and gut their homes, many have noted that recent flood levels were worse than those experienced in the aftermath of Hurricane Harvey in 2017.

Staff from The Salvation Army in Beaumont spent the early part of the week preparing 150 sandwiches that were delivered to a badly flooded area of the city. The EDS team carefully navigated the mobile kitchen through neighborhood streets lined with furniture, carpets, drywall and household appliances ruined by more than a foot of water that entered homes.

“We were prepared over the weekend to shelter people at The Salvation Army who were displaced in our community and focus has now shifted to feeding in areas of the city that have experienced significant flooding,” said Captain Jason Moore, Commanding Officer of The Salvation Army in Beaumont. “We anticipate delivering food…for as long as we are needed.”

Damage assessments in affected communities throughout the region are ongoing and The Salvation Army continues to coordinate with State and Local Emergency Management staff across the affected areas. The Salvation Army team from Orange visited several cities on Tuesday afternoon, providing a hot meal, snacks and drinks to anyone in need.

After The Salvation Army served meals to a family of five in Mauriceville, a lady approached the Rapid Response Unit from the adjacent home.

“We offered her a meal and drink, but she declined as she approached the truck,” said Captain Francisco Zuniga, Commanding Officer in Orange. “It quickly became clear that this dear lady was completely overwhelmed with her current situation and desperately needed someone to talk to. I was happy to share a moment or two with her and privileged to pray with her. She lost her husband four years ago and then experienced the almost total loss of her home after Hurricane Harvey. Life was just beginning to return to normal when her home flooded again last week,” said Zuniga. “This was a timely reminder for me that The Salvation Army’s ministry during times of disaster goes way beyond simply delivering a sandwich or bottle of cold water. Our emotional and spiritual care continues to make a difference in the lives of people who find themselves in crisis, and what an honor it is to pray with them.”

Corporate partners and other disaster agencies continue to play an integral part in The Salvation Army’s response efforts in Southeast Texas. A tractor trailer load of water and dry snacks arrived at the disaster warehouse in Beaumont, Tuesday, courtesy of Walmart, in addition to a truck load of food boxes from the Midwest Food Bank.

“We are so grateful for the support of Walmart and the Midwest Food Bank, along with our other valued partners,” said Alvin Migues, Emergency Disaster Services Director for The Salvation Army in Texas. “As recovery efforts continue across the region these relationships will allow The Salvation Army to provide much needed practical assistance as individuals and families work to put their homes and lives back together.”

Assistance continues in Liberty, Chambers, Harris, Montgomery, Orange and Jefferson counties. Beginning on Thursday, The Salvation Army will partner with St. Vincent DePaul in Winnie, Texas, one of the hardest hit communities, providing a truckload of cleanup kits and food boxes at St. Louis Catholic Church. A mobile kitchen from The Salvation Army of Bryan College Station will also be onsite providing snacks and hydration.