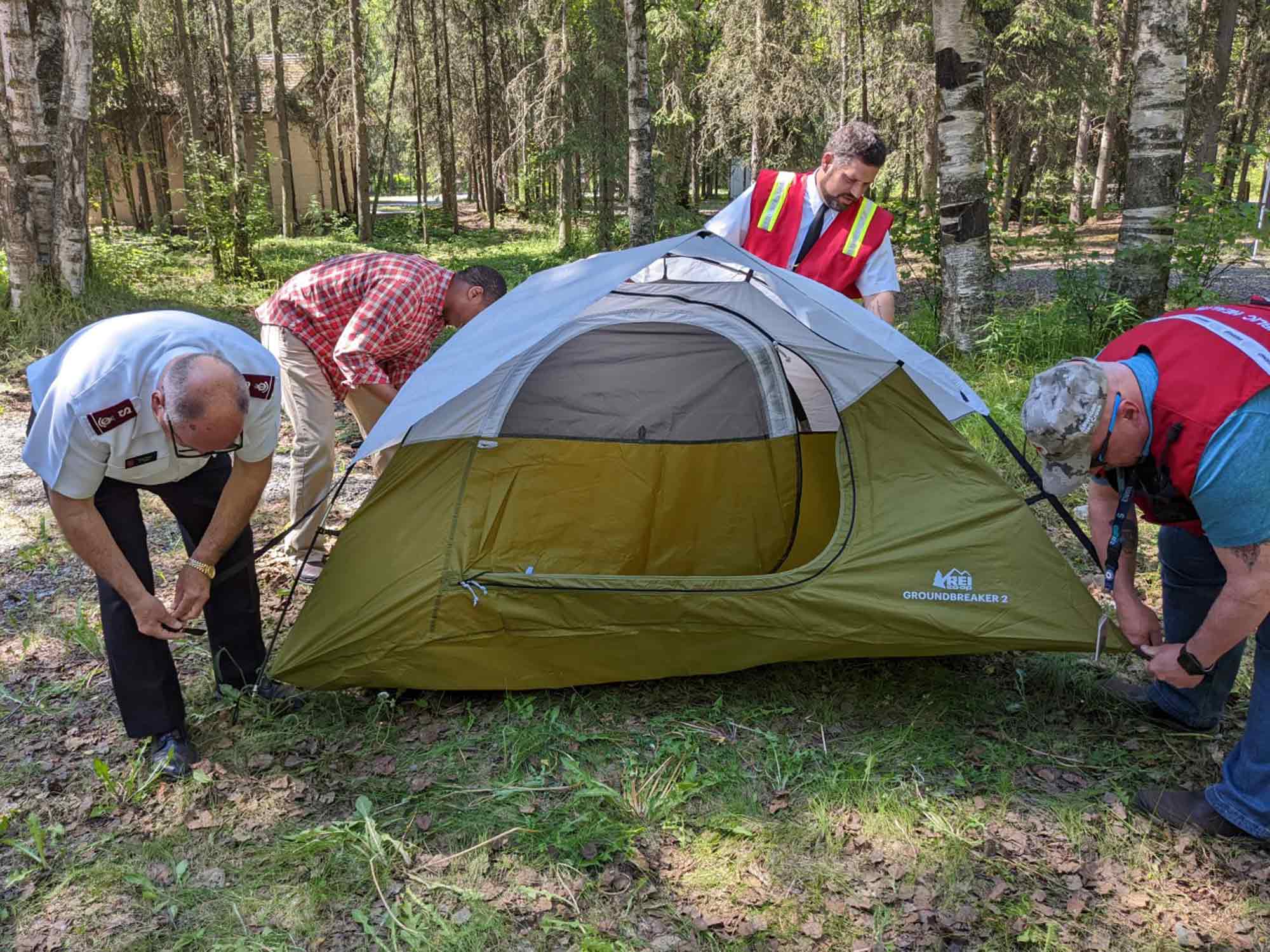 As the date approached for the closure of the mass shelter at Anchorage’s Sullivan Arena for those experiencing homelessness during the pandemic, the question became: Where are people going to go?

The Municipality of Anchorage worked with local nonprofits to identify solutions for individuals who wanted to find housing or seek treatment options, according to Alaska Public Media. When the shelter closed by the Municipality on June 30, those who had not been placed were taken to the Centennial Campground and provided with a tent, blanket and mat for tent camping.

At the campground, which is located about 15 minutes from the arena, what started as a group of about 30 individuals grew to over 150, said Salvation Army Anchorage Social Services Director Captain Denice Delgado, who is charged with handling the day-to-day management of client care at the campground.

“[It was a] you-build-it-they-will-come type of mentality,” she said, noting the number of people at the site changes daily. “Everybody just kept coming.”

And with the people came human needs. Because the number of people expected to camp was low, there was initially no structure in place for managing services. Local groups began to get involved, but there was no clear point person or group, according to Alaska Divisional Secretary Captain Kevin Pope. When the municipality approached The Salvation Army to help, Alaska Divisional Commander Lt. Colonel Douglas Tollerud said, “Yes.”

On July 20, The Salvation Army began assisting with food coordination and managing client services with the goal to assist people who want to continue to camp with what they need as well as those who want a change. As time progressed, the Army also took on handling the processing of in-kind donations at the campground as well.

While several safety-related incidents caused many agencies to be concerned for their safety at the campground, The Salvation Army continued to serve, which Pope said prompted others to do the same.

“We’re out there every day, and then when they saw that we were still going out there…they were like, ‘OK, we’ll come and help,’” Pope said. “I think it’s been good for everyone, especially the people in the campground, that we’re just trying to be that constant, steady provider…We’re here. We have a job to do.”

Pope is serving as the Incident Commander, a role traditionally assigned in a Salvation Army response to natural disasters as well as humanitarian crises. Because the response was unplanned and in a remote site, Pope said the EDS Incident Command System has been implemented to help manage the situation.

Additionally, Pope said the division brought up Salvation Army California South EDS Director Nick Nguyen to develop a strategic plan, due to his experience with serving those experiencing homelessness in the greater Los Angeles area.

“We’re out there every day,” Pope said. “Our biggest challenge is going through the campground and seeing who’s still there, who’s not there, who moved in—getting them registered and finding out what services they need.”

But the efforts have resulted in individuals and families achieving permanent housing. The Salvation Army first worked to get shelter to families sleeping in tents when it established its presence at the campground.

“Thirty-two people, including four families, were transitioned into McKinnell House and [Catholic Social Services] Clare House Family Shelters, and other permanent housing yesterday. As of 5 p.m. last night there were no more children at the camp,“ said Tollerud in a statement July 22.

One of the families that came to the McKinnell House, which provides emergency housing to families experiencing homelessness, was already able to move out because the father got a new job and secured housing, Delgado said.

Additionally, Delgado said they’ve had reunifications through helping to send individuals back to their families. They’ve also assisted a couple who was stranded, and helped another man get home to the village in St. Paul Island.

As of July 27, Delgado said the Army and its partners have been able to help five people get home and place 32 people out of the park.

“It’s been a good thing,” Pope said. “A lot of people are getting helped, and people are coming out to the campground because they know they’re going to find services there.”

Thanks to members of the community, donations have flooded in of items like tents, tarps, clothes and hygiene resources that The Salvation Army manages and distributes.

Other community groups who have safe serve accreditation, like Anchorage-based Beans Cafe, have been providing meals three times a day. Delgado said the Army is working with Beans Cafe to provide additional wraparound services, as Beans Cafe aims to hold spots in its workforce development program for those at the campground.

“It’s really taking a village,” Delgado said. “If homelessness was easy to solve, we would have solved it by now—but it’s complex.”

The question of “what’s next?” remains, as tent camping will not be possible as colder weather approaches—Anchorage’s average lows hover around 15 degrees Farenheit in the winter months. Pope said The Salvation Army is providing support to the Municipality as they develop a cold weather shelter plan.

“We’re not under contract. We’re not getting paid for this,” Delgado said. “We are literally living out the mission of The Salvation Army, and that’s meeting human needs in his name without discrimination.”