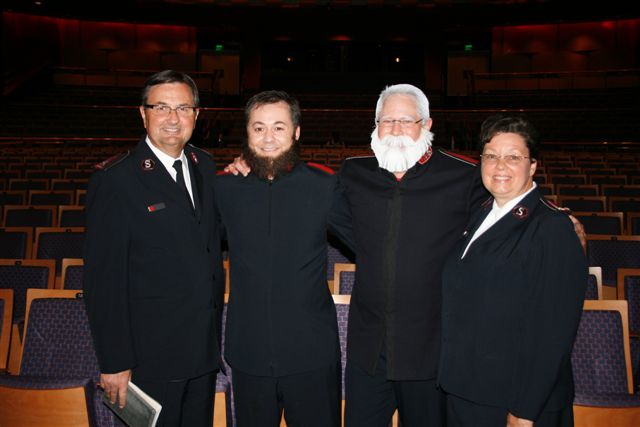 Commissioner Knaggs with the cross of 2x4s

Labor Day weekend was more than just a holiday, it was a time of fellowship, fun, and spiritual renewal for the Southwest Division as they gathered in Mesa, AZ for the Deeper Life Family “Camp” Meetings.

Special guests for the weekend were Commissioners James and Carolyn Knaggs and Majors Glen and Linda Madsen from Territorial Headquarters.

As is tradition, the Friday evening Welcome Extravaganza celebrated the diverse cultures represented in the Southwest. Ladies from the Tucson Korean Corps presented a beautiful number dressed in traditional colorful attire. Phillip Gonzalez from the Apache Junction Corps added a Latin flare with a mariachi-style song sung in Spanish. Despite the language barrier that often accompanies such diversity, all delegates were able to be united through the wonders of modern translation equipment.

Saturday’s events included men’s and women’s rallies, workshops, and a trip to the zoo for the kids! While the kids were braving the weather hoping to see lions and tigers and bears (oh my!), their parents were learning about prison ministry, God’s vision for their lives, and the heritage of Salvation Army music. Workshops were also conducted in Spanish and Korean, so all delegates had an opportunity to hear God’s message for them in their native tongue.

Ladies from the Tucson Korean Corps

Saturday evening was the highlight of the weekend. Brengle: My Life’s Ambition, a musical production celebrating the life of Commissioner Samuel Logan Brengle, was presented to an audience of 1100 Salvationists, board members, donors, and community members. It was the desire of Lt. Colonel Rhode Danielson to see this musical performed at Deeper Life. But God called her home before she was able to see her dream become a reality. To honor her memory, Divisional Bandmaster Ralph Pearce brought together a company of officers, soldiers, and friends of the Army to put the presentation together.

As rehearsals commenced, lines were memorized, dances were choreographed, lyrics were learned. What started out as a chore turned into a blessing for everyone involved. Captain Randy Hartt, who portrayed 71-year-old Brengle, shared how the lines he memorized had so affected him that they changed his life. Captain Robyn Bridgeo, who played young Brengle, shared a similar sentiment.

Sunday morning’s Holiness meeting brought a meaningful close to the weekend. Commissioner Knaggs enrolled 21 senior soldiers, 10 junior soldiers, and seven adherents into the ranks of the Southwest Division. New senior soldier, 16-year-old Desiree Montoya, shared a moving testimony about how God, through The Salvation Army, has worked in her life since the death of her mother. Junior soldier, William Park, although only seven years old, would make his namesake, William Booth, proud. This young man very articulately shared how proud he is to be a junior soldier, and how God answered his parents’ prayers for a child.