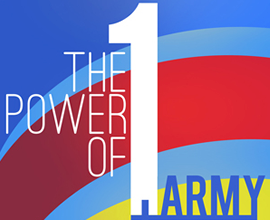 Registration is now open for the 2014 National Social Services and Disaster Management Conference—“The Power of One Army, Transforming Our World”—happening March 25-28 in Lake Buena Vista, Fla.

“We sometimes fail to recognize how great our collective strength is,” said Major Darryl Leedom, national social services secretary. “A national conference provides the opportunity for personnel to see themselves woven into the fabric of The Salvation Army, this garment that is large in scope and in service. An individual might play a small part, but he or she is part of a movement doing great things.”

Leedom said key issues will be addressed, including alleviating poverty in America.

“The Army is starting to see itself not only serving the poor but bringing solutions to the poor,” Leedom said. “We’re 30 million strong in units of delivery, but are we at capacity? Here, we will focus more on outcome as opposed to output.”

Tabletop discussions on eight issues from the LGBTQ initiative to workplace violence and housing first solutions will happen over meals intended to facilitate participation.

“Being in the Magic Kingdom, I can’t help but think that so many of Disney’s stories are about individuals in crisis finding redemption. From Mulan, to Cinderella to Mary Poppins, each character has a crisis moment and then some intervention that leads to a life that is fuller and richer,” Leedom said. “I firmly believe that’s the role of The Salvation Army for so many in America who find themselves in crisis. The Salvation Army intervenes and makes life richer and fuller.”