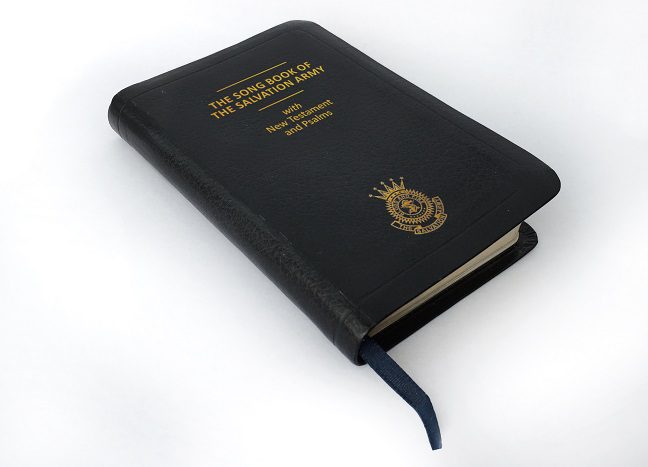 Almost 30 years after the last Salvation Army song book was published, a new “user-friendly” edition is being released in the Army’s 150th year. The Song Book of The Salvation Army, which launches on July 2 (Founders’ Day) at Boundless – The Whole World Redeeming is intended to meet the needs of contemporary Salvation Army worship around the world.

“Music has always played an enormous role in the worship of God’s people,” said General André Cox. “It touches the soul in a unique way and can lift and inspire. God has gifted The Salvation Army with great poets who have a unique ability to express in words some of our deepest emotions, desires, devotion and love for God, which many of us would struggle to do without their special talents. As well, The Song Book of The Salvation Army is a repository containing much of our doctrinal teaching, making it an essential tool for the development of our faith.”

Cox said he appreciates being able to leaf through the pages of his song book when he wants to put aside the pressures of the outside world. “I can assure you that I am not prone to singing aloud on my own during personal devotions, and neither can I claim to systematically use the song book every day in this respect,” he said. “But when I am reading Scripture, the words of a song will often come to mind, and I do like to look them up and reflect on those words.”

Recognizing that the Army song book is no longer so widely used in some places, Cox said, “There is nothing wrong with using modern and new songs, but equally there is no reason to neglect the richness of what we have. It is sad when we no longer know or use some of our great songs that are taken up by other denominations. I think in a world of shifting values, our song book is more than relevant in reaffirming our beliefs and nurturing our faith.”

Salvation Army song books have tended to be updated around every 25 years. The vision for the latest edition came from General Shaw Clifton (Ret.), who convened a Song Book Council in 2009, a year before his retirement as the Army’s international leader.

“Our song book has come to mean a great deal to me through the years as a spiritual help and source of inspiration,” Clifton said. “I spoke with my predecessor [General John Larsson] before taking office and he agreed a new book was needed. I also discussed it at length with my closest and most senior advisers, and then sought feedback from throughout the Army world.”

Although the use of large screens to display congregational songs has changed the way the English language Song Book of The Salvation Army is used, the feedback received by International Headquarters was that this technology should not deprive The Salvation Army of a printed song book.

Having decided to move ahead with the project, suggestions were then sought about which new songs to include. Not all the added songs were written recently, as some are 50 or 60 years old. At the same time, the Song Book Council needed to decide which songs from the 1986 song book to omit.

“Previous Generals had not hesitated to drop about one third of the content of a song book when planning for a new edition,” Clifton said. “Therefore, the Song Book Council felt able to be bold in a similar fashion.” Work on the new edition, particularly song selection, was well under way when he handed oversight of this task to his successor.

The Song Book Council aimed to make the new edition as user-friendly as possible, which led to the addition of new features such as key Bible references above every song. An index to those references is included to further assist leaders in worship planning. In addition to piano and brass music for all songs, guitar chords are included for the first time, along with suggested introductions for every tune. Parts are provided in concert pitch and in the key of F, and some tunes have been brought down in pitch so they are easier to sing.

The previous song book contained 962 songs and 251 choruses. The new edition has 1,041 songs but a separate chorus section is no longer included, as many modern compositions are not easily classified as “songs” or “choruses.” Songs in the previous edition were grouped into 12 major sections. The new song book has three main sections: The Eternal God, Our Response to God and Benedictions, with songs organized into categories and subcategories of these sections.

Four years ago, Lt. Colonel Trevor Davis was asked to accept the role of Tune Book Coordinator on the Song Book Council. He has worked closely with Andrew Blyth, assistant territorial music director of the United Kingdom Territory with the Republic of Ireland, the Music Ministries Unit of that territory and other musical arrangers to provide easier and more accessible accompaniments that assist congregations to worship God, and to ensure the musical settings did not detract from song lyrics.

“I love hymnody of all kinds, but I also believe the songs in our Salvation Army song book have provided me with an enhanced scriptural and doctrinal perception,” he said. Although much of the progress technology has brought to corporate worship is helpful, he said he does mourn that the newer style of singing, with songs often appearing on screen line by line, means singers miss the richness of seeing the sequence of lyrical expression in adjoining verses.

“I think the new song book represents who we are in The Salvation Army very well,” Davis said. ‘Naturally I, like everybody else, will have my own joys and disappointments about what is included. However, from the tune book side of things, the song book has been prepared by a group of competent people who have done this with integrity and skill, not to mention extreme dedication.”

Blyth’s contribution reflects his long association with Salvation Army music-making. He learned to play brass in a Salvation Army young people’s band and to sing in the singing company, joined the Music Editorial Department in the UK at 18, and became a member of the International Staff Band the same year.

“It was there that I learned harmony and started to compose music for The Salvation Army,” he said. Since then, Blythe has served as the leader of the International Staff Songsters and Enfield Citadel Band. Currently, he serves as bandmaster of Peterborough Citadel Corps Band.

“The Salvation Army is an integral part of my faith journey,’ Bylth said. “The Army has supported me during the challenging times of my life, corrected me when I needed it and encouraged me in my everyday activities. Of course, its music appeals to me, but I have also seen the Army at work in areas of social need and during times of disaster.”

He said it has given him a respect for what The Salvation Army stands for and an enthusiasm for seeing this reflected in the Army’s music.

Although a number of 1986 arrangements are used in the 2015 tune book, 200 new arrangements were added, which took two years to complete. The editing and proofing of the music was a mammoth task, with more than 20,000 separate parts to read.

For those counting the cost of upgrading to the new song book, Cox recommended it as a worthwhile investment.

“My parents purchased a copy of the 1986 song book when I was a young officer serving in Zimbabwe,” Cox said. “That copy has been with me for almost 30 years now and the pages are well turned, so I guess that was good value for money, and it certainly has been with me through some personally difficult times.

“Our song book contains songs that point us to the life of faith, inviting us to lift up our eyes and to embrace and rejoice fully in the realization that God is with us no matter what our circumstances or whatever challenges we face.”