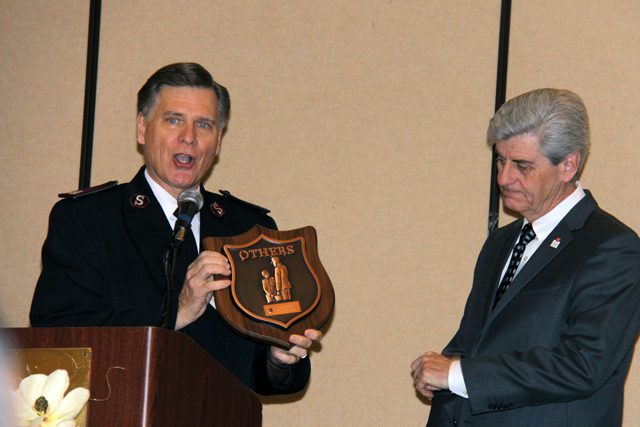 Winter meeting presents Others award and looks ahead

Hosted by the Southern Territory and the Alabama, Louisiana and Mississippi Division, a community leadership breakfast to kick off the meeting attracted more than 125 locals. An “Others” award, the highest honor bestowed on non-members of The Salvation Army, was presented to Mississippi Governor Phil Bryant, a member of the Jackson Advisory Board. Bryant, a long-time and ardent supporter of the Army, lauded the efforts of the organization during his keynote address.

“There were multiple benefits of this style, a leadership style that fit Booth’s personality,” McKinley said. “It enabled the Army to be adaptable, structured and efficient—benefits that continue to this day.”

During the same session, National Commander Commissioner David Jeffrey presented data and highlights from the Pathway of Hope initiative that is being rolled out in the Central Territory, and various committee meetings were held throughout the afternoon.

During an evening gala, NAB members experienced “A Taste of Mississippi” with a sampling of Mississippi’s finest chefs and cuisine. Three inspiring individuals, whose stories reflect the heart of the Army, were presented with a “Trophy of Grace.” The Southern Territory offered entertainment and Captain Andy Miller III gave a brief but lively presentation of his new book, “Holistic Hospitality (A Bridge to a Future Army)” in a style reminiscent of his grandfather and former national leader, Commissioner Andy Miller.

In its final meeting, the board discussed the National Advisory Organizations Conference (NAOC) slated for April 21-24, 2016, in Phoenix, Ariz.

In anticipation of the event, Western Territorial Commander Commissioner James Knaggs said, “This conference presents an outstanding opportunity for all of our advisory organizations to come together and share best practices, learn new, profitable and rewarding ideas for work in their respective communities.”