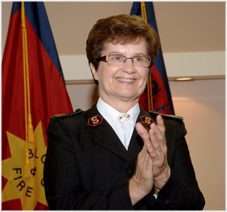 In her first official visit to the U.S. as the international leader of The Salvation Army, General Linda Bond was the keynote speaker Sept. 9 at the American Bible Society (ABS) in Manhattan, N.Y., helping to launch The Freedom Bible, Global Edition, and to commemorate the 10th anniversary of 9/11.

ABS Executive Vice-President Robert Briggs called the Bible “a new resource of hope.” It highlights 3,500 liberating verses and is endorsed on the back cover by Commissioner Christine MacMillan, director of the Army’s International Social Justice Commission.

“The Freedom Bible spells out what it means for us to accept God’s gift of freedom, and it is a Bible to energize and transform the lives of the captive and those fighting for freedom,” MacMillan writes.

“The week before 9/11 we shared the gospel with 10 guys,” Jerry Sillcocks, President of Firefighters for Christ’s New York Chapter said at the luncheon. “Half of them went to their death within a week. It was their first fire.”

Bond spoke of the Army’s response to the 9/11 attacks. Addressing the question: “Where was God on 9/11?” she said: “He was in the stairwells; he was running up the stairs with the firemen; he was on Flight 93 when they decided to say: ‘Let’s roll!’ The God we serve is there with us.” 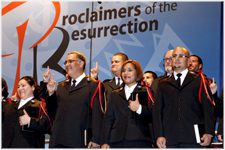 “I appreciate the welcome and the honor you show me as the international leader of The Salvation Army, but please remember, all the glory goes to Jesus,” Bond said. “The one thing we really must do tonight is lift up the name of Jesus!”

In her message, Bond said, “The Salvation Army has one message: the transforming message of Jesus Christ. We are people of the Resurrection!” She emphasized the importance of the Army continuing to proclaim that Jesus is alive.

“We must be faithful to the work and do our duty,” she said. “I believe if we do that, revival will come.”

From an international news report.