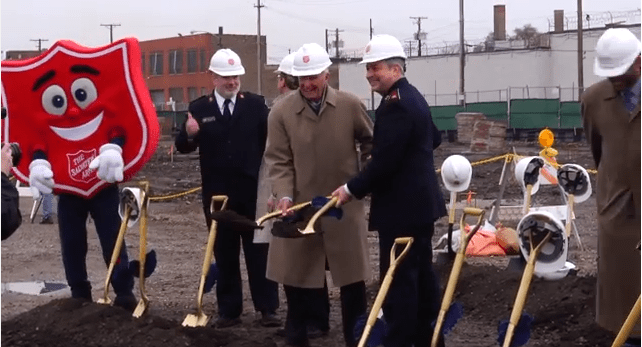 “The Freedom Center, and particularly the new Salvation Army Corps Community Center that will anchor the new campus, presents us with an extraordinary opportunity to dramatically improve the lives of children and teens on the West Side who need a safe haven and positive alternatives to gangs and drugs,” said Lt. Col. Ralph Bukiewicz, Chicago Metropolitan divisional commander of The Salvation Army. “The Corps Community Center will offer after-school programs, summer camps, educational and recreational opportunities for young people.”

According to Chicago Police Department figures, violent and property crimes plunged by 56 percent citywide from 2010 to 2013—momentum The Salvation Army looks to build on.

“When kids don’t have anything to do, they’ll find themselves something to do, and that something is trouble,” said former Salvation Army Freedom Center client Michael Hill, whose story was featured at the groundbreaking ceremony. “So keeping them focused, keeping their attention on something positive is a great avenue to success, and a great avenue for keeping young people out of trouble. Today, my life consists of a job, a beautiful wife, and three beautiful children. The Salvation Army changed my life. That program made the man I am today. It made me the father I am today. It made me the leader in the community I am today. And, I thank God for that experience.”

The existing Freedom Center location at 1515 W. Monroe is housed in a building nearing 100 years old, which has become more expensive to maintain and repair than to replace, creating a financial necessity for a new campus.

The Corps Community Center on the new campus is expected to serve an estimated 22,500 people each year, including many young people. It will feature classrooms, computer labs, a gymnasium and a chapel that can also serve as a multipurpose performance space for the arts. Completion of the Freedom Center campus is expected by the fall of 2015.

“There’s probably not a single project across the city or the state that has the potential to make a greater impact on so many people’s lives and so many societal issues,” said Mike Karpeles, Salvation Army Chicago Advisory Board chair.

In Chicago, 22.1 percent of residents live below the poverty line, as compared to 13.7 percent in all of Illinois. “An investment in this project is an investment in the future, with a strong return by saving taxpayer dollars spent on the high costs of incarceration, unemployment and health care,” Karpeles said. “And, it will also help break the intergenerational cycle of poverty through the many preventive programs it will offer for young people.”