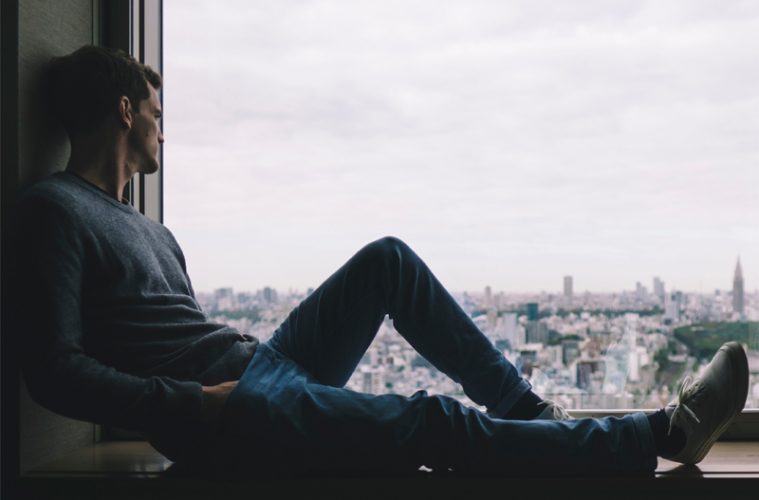 We’re more connected than ever through technology, but an emoji can’t take the place of a hug.

We all feel lonely at times. I have a family mem­ber who calls herself a hermit—she doesn’t really feel the need for much in the way of companionship. But I sense that there are moments when she feels lonely. I know a guy who jokes about not wanting or needing friends. Yet I don’t know where he would be without his dog. I have hundreds, if not a thousand, phone numbers on my contact lists, and tens of thousands of “friends” on Facebook. Yet there are moments when I feel alone.

Loneliness is the feeling of sadness that comes from a sense of social isolation—from feeling alone as though we have no real companions with whom to share our life.

DO GOOD
– Acknowledge your fears, rather than letting them remain hidden in the back of your mind. Write down what you are afraid of today and bring it out into the light. Try crumpling it up and stomping on it. Then ask yourself: What’s really the worst thing that could happen? Then prepare yourself and get in the game, whatever that might be.

– Read “Unafraid: Living with Courage and Hope in Uncertain Times” (Convergent Books, 2018) by Adam Hamilton, author of the bestselling “Making Sense of the Bible.” Fear is a huge issue for people of faith, yet over 140 times in Scripture we are called to “fear not.” As senior pastor of a 20,000-member congregation, Hamilton has seen fear up close. In this book, he draws upon insights from psychology, sociology and the Scriptures to offer inspiration and help for addressing the most common sources of fear, worry and anxiety to help us live “unafraid, with courage and hope.”

Loneliness is not the same as solitude. We all need solitude from time to time. Not long ago, I went through a stretch with­out any evening meetings—unusual for me. By the third eve­ning, just as I was settling into the living room, attempting to strike up a conversation with my wife as she was trying to read, she said to me, “Isn’t there some ministry that needs you to­night, or someone you need to visit in the hospital?” We both laughed, but her comment revealed something I’d missed. I was intruding on my wife’s alone time.

We do need times of solitude, but we are also wired as human beings for companionship—for people we can share our lives with, talk to, listen to—people who care about us and enjoy being with us. Whether you enjoy a rich web of relationships today, or find yourself standing alone in your kitchen too many nights, wishing with all your heart that someone you love was coming home for dinner, we all will struggle with the fear of being alone at times.

What’s interesting is that technology can help us stay connected, but it often leaves us more isolated than in the past. We speak in 280-character tweets and short text messages but often at the expense of hear­ing each other’s voices, looking into each other’s eyes, or expe­riencing the touch of another person. When things are going rough, we send our friends a sad face emoji or a text message expressing sympathy and consolation, but an emoji can’t take the place of a hug.

In an article in The Atlantic titled “Have Smartphones De­stroyed a Generation?,” Jean Twenge, a professor of psychol­ogy at San Diego State University, describes young people born between 1995 and 2012 as the iGen, referring to the fact that most of them, even those raised in lower-income families, will have a smartphone as they grow up. Twenge notes, “It’s not an exaggeration to describe iGen as being on the brink of the worst mental-health crisis in decades. Much of this deteriora­tion can be traced to their phones. . . . The number of teens who get together with their friends nearly every day dropped by more than 40 percent from 2000 to 2015.” It might appear from Twenge’s research that the loneliness epidemic is just get­ting started.

In light of all of these factors that play a role in developing and maintaining meaningful relationships, how can we over­come loneliness, and live without fear of future loneliness and of being unloved?

As with other fears, part of what we’ve learned is to examine our assumptions in light of the facts. We’ve also learned to recognize our catastrophizing tendencies, to choose not to jump to conclusions, and to assume the best instead of the worst of the other.

When I was in college, I sold women’s shoes in a department store. One day, a couple came into the store looking at shoes, picking up various samples from the display cases. I stood be­hind them and said, “Hi! Can I help you find something today?” But neither responded. I waited for a few moments and asked again. Still no response. I waited a few minutes more and asked again. Still no response! I found myself getting irritated. Did they think so poorly of a shoe salesman that they didn’t even feel they needed to reply? We sold expensive women’s shoes, so I figured they were wealthy people who thought they were too good to speak to me, a lowly clerk, until they wanted some­thing.

As I stood there stewing, the couple turned around. Only then did I notice that they were communicating to each other in sign language. I had jumped to the conclusion that they were intentionally ignoring me, but obviously they hadn’t heard a word I’d said. I realized that I was the rude one, having not shown enough respect to approach them face-to-face.

Reprinted from “Unafraid: Living with Courage and Hope in Uncertain Times” © 2018 by Adam Hamilton. Published by Convergent, an imprint of the Crown Publishing Group, a division of Penguin Random House LLC.