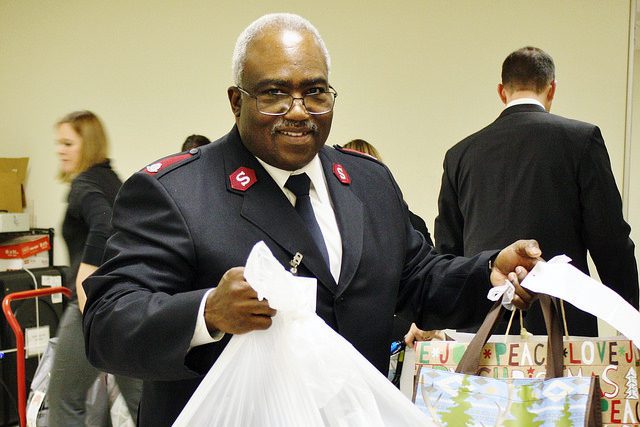 As violence wanes in Ferguson, Miss., The Salvation Army continues to serve those impacted by the intense protests.

Riots broke out in Ferguson after the shooting death of Michael Brown, 18, by a Ferguson police officer Aug. 9 and again Nov. 24, following the grand jury verdict that did not indict the officer. At least 27 businesses in Ferguson and surrounding areas were damaged by fire, according to the Ferguson Fire Department.

Major Lonneal Richardson, divisional commander in The Salvation Army Central Territory Midland Division, said that while most of the protests since the grand jury verdict have been peaceful, the more violent ones exacerbated the city’s already struggling local economy.

Ferguson’s unemployment rate climbed to 13 percent last year, more than twice the national average of 6.2 percent, according to the Bureau of Labor Statistics. Now, nearly 1 in 4 residents live below the poverty line.

Some of the protests also disrupted regular public transportation schedules, which in turn prevented many residents from getting to work, according to Richardson.

“You have people that are at basic or minimum wage employment, [in which] any disruption to their income causes a major impact to their financial well being,” Richardson said. “The tear gas kind of permeated a lot of homes. These are not individuals necessarily protesting; they just lived there and found themselves kind of trapped in their homes and unable to go out.”

Richardson participated in a coordinated call with the White House that addressed the need to protest, “but not in a way that destroys the community,” he said.

Since August, The Salvation Army has helped over 300 local families who were affected by the local violence through food and personal care items, rent and utility assistance and mental health counseling. It is now shifting its response to long-term case management.

“Ever since the shooting incident, we’ve been trying to brainstorm, collaborate––‘what are the best ways we can help?’” said Captain Matthew O’Neil, Midland divisional youth secretary. “Christmas is something that if they have the means to provide for their children they provide for them, but most parents see the necessities as basic essentials such as housing, food and basic types of care.”

The Salvation Army will hold a shopping spree for over 70 local children Dec. 19, and each child will receive a $100 WalMart gift card. The Army is running a toy shop Dec. 22 in partnership with the Ferguson Church of Nazarene and Billy Graham Ministries where local parents can select Christmas gifts for their children.

Richardson said the Army is working on a series of committees to organize community events at local Salvation Army camps that would allow for “positive interactions between law enforcement and the community.”

“We continue to work with committees looking to help address some of the stem problems of poverty, low employment by a lot of the youth in these areas, and the Army comes in with some of our programs that we have and also working and talking with other community leaders,” he said.

“They’re very receptive of The Salvation Army and all that we’re trying to do,” O’Neil said. “Hopefully we’ll see a Ferguson restored.”