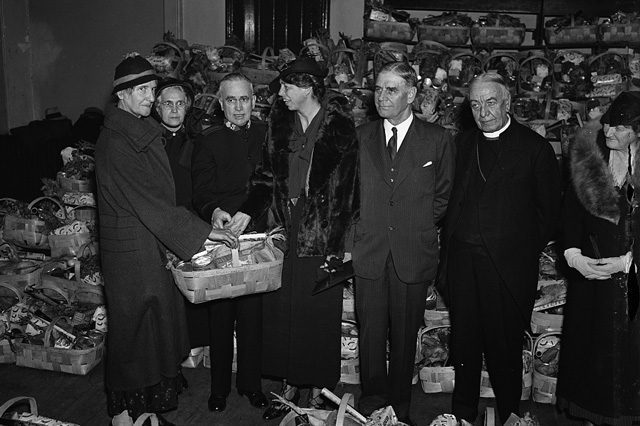 Eleanor Roosevelt—friend of The Salvation Army

In 1934, First Lady Eleanor Roosevelt helped The Salvation Army distribute food baskets to people in need, as she did on numerous occasions. The photo shows her presenting a basket to Mrs. May Johnson.

Eleanor Roosevelt was a staunch supporter of The Salvation Army and other charitable organizations. The longest-serving U.S. First Lady, she held the post from March 1933–April 1945, during her husband President Franklin D. Roosevelt’s four terms in office. In addition, she served as U.S. Delegate to the United Nations General Assembly from 1945–1952, and as the first Chair of the Presidential Commission on the Status of Women, from 1961 until her death, Nov. 7, 1962.

“They were a tiny band of pioneers—seven Salvation Army girls and one man. On that small foundation has been built an organization in this country that today includes 5,000 officers and some 250,000 members.

“The uniform of the Salvation Army did not always meet in those early days with the respect it inspires today. At first the Salvationists were met with ridicule, but slowly they demonstrated their faith in God, and I think today they are among the most-respected of our charity workers. To them every human being has value; no one is hopeless. They never turn away from their door the lonely, the hungry, the troubled and the discouraged.

“One small interesting part of the organization’s work is its missing persons’ bureau. Another is its employment agency, which finds both permanent and temporary jobs. Last year it placed as many as 150,000 in jobs. And though we know the Salvation Army’s social service as widespread, it counts its religious service as important as its social work.”