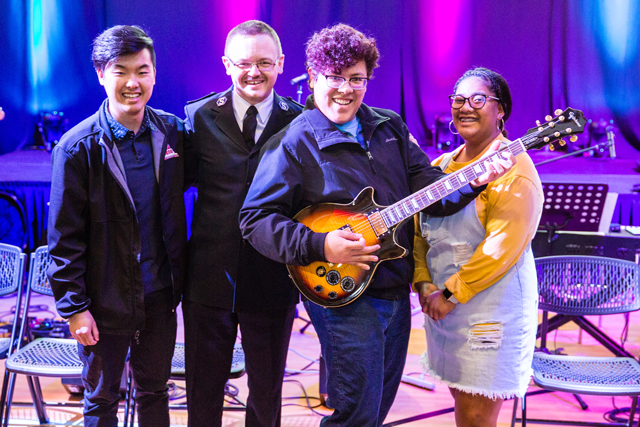 The TWAR—themed “Created to Create”—sought to provide delegates with resources and ideas that they could take back to their corps, thereby prepared to incorporate the arts into worship services.

“It’s my hope and prayer that we will all come away with a new thirst to glorify our creator through the gifts bestowed upon us,” said Matthew Woods from the Western Territory Music Department, as the weekend began. Specials guests were Peggy Thomas from Chicago, well-known in The Salvation Army as a musician and worship planner who joined the Central Territorial Music and Gospel Arts Department in 1979; Jon Jorgenson from Chicago—at his first Salvation Army event—an author, speaker and spoken word poet whose YouTube videos have been viewed by more than 20 million people; and Kellyn Thornburg from New York City, a professional dancer and choreographer who serves as the Regional Creative Arts Leader for The Salvation Army of Greater New York.

At the first main session, Territorial Program Secretary Lt. Colonel Lisa Smith quoted Ravi Zacharias, asking, “How do you reach a generation that listens with its eyes and thinks with its feelings?”

One way to reach that generation for Jesus, Smith said, is through art.

“When we create we feel the connection to God…It’s joyful to create something beautiful,” she said. “Our creations give pleasure to God, as well as having the potential to bless others.” Art can be a powerful tool for reaching people for Christ, Smith said.

“You can sing things to people you could never say,” she said. “Dramatists can present ideas that people wouldn’t accept from a pastor.”

Smith also noted that spiritual gifts include more than people might think, including crafts like sewing, cooking and woodworking.

“What’s the gift God has given you?” Smith asked. “Let God the the Holy Spirit infuse your art.”

In the second main session, Peggy Thomas emphasized the importance of creating moments in worship where people can sense the presence of the Lord.

“Churchgoing is no longer a priority…There’s an assumption that it won’t be worth our time,” Thomas said. “This means there’s an opportunity.” A worship committee can grab that opportunity, and with carefully designed services, people’s minds can be changed. As they sense the presence of God, they will want to return.

“If we’re intentional, we will have these moments every week,” Thomas said.

A strong worship committee will involve people with various gifts, working together to support the corps officer. In planning, she said, the more senses we involve in the moment we create, the more powerful the moment will be.

In closing, she cautioned worship planners not to violate a huge moment with the mundane, such as corps announcements right after a video depicting Christ’s crucifixion and resurrection.

At the third main session, Jorgenson spoke about the dangers of idolatry—putting something, like money or a relationship, in place of God. For creative artists in the church, work can become an idol, as performers may act or sing to get glory instead of to give glory to God.

“Are we deriving our worth from our work?” Jorgenson asked. “Just because your work is personal doesn’t mean it has to be about you…What could you do if it wasn’t about you?”

He urged delegates to let their creative expression be not about themselves but about the One who bestowed their gifts upon them.

“If we get this right, I believe we’d see a revival of creativity in the church,” Jorgenson said.

Ultimately, it’s not peoples’ work that defines their worth. “God’s work defines my worth: the work of Jesus on the cross; the work of God the Holy Spirit…I’m defined by God’s love,” he said.

Hodder spoke on Sunday, using imagery of the sea and recalling Shakespeare’s “The Tempest” as he detailed the “sea change” that occurs in those who “dive into the sea of Christ’s love and mercy.” When they emerge, they are no longer their old selves, but are new creation in Christ (2 Cor. 5:17).

“We ask God to cleanse us and use us…[for] what you have experienced, you seek to create in someone else,” Hodder said. “We need you,” he said. “There’s a difference between institutions and movements—the difference is stories. More than anything, the church of Jesus Christ should be a movement that grows by stories. We need you to tell stories. As long as Bible-believing Christians have stories to tell about lives changed, the church has nothing to worry about—it will continue to grow.”

Del Oro Divisional Commander Major Ivan Wild concluded the service in prayer, requesting a blessing upon all creatives to draw others to Christ.

Weekend highlights included an open mic night and performances from Jorgenson and Thornburg. A combined praise and worship team from the California South Division created a joy-filled atmosphere at each united meeting.