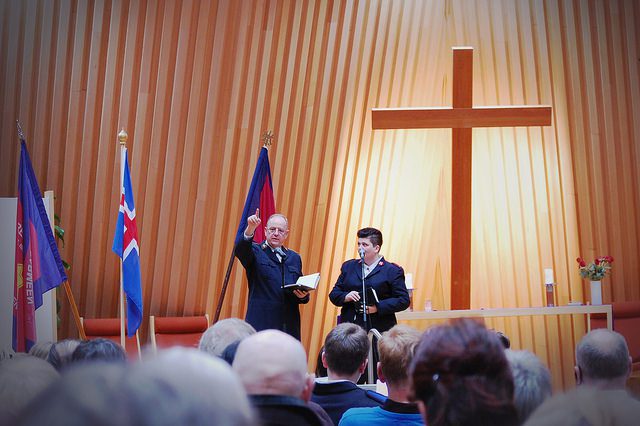 General André Cox and Commissioner Silvia Cox, World President of Women’s Ministries, visited The Salvation Army in Iceland during the “Mobilize: Go Children and Youth!” weekend of “The Whole World Mobilising” initiative.
In addition, the international leaders, with territorial and divisional leaders, met the Prime Minister of Iceland, Bjarni Benediktsson, at his office. They discussed the challenges being addressed by The Salvation Army in Iceland, including homelessness and poverty.
At the first public meeting of the visit, held in a church close to Reykjavík Corps, celebrations included an introduction to the initiative. After Silvia Cox’s Bible message, many people went forward for prayer and reflection.

A crowd gathered for prayer at the spot in Reykjavík where The Salvation Army will soon begin work on a new corps building and a new divisional headquarters. Where the growing Reykjavík Corps is currently located, people marched through the shopping mall and teenagers from The Salvation Army demonstrated their dance skills.
The last meeting, on Sunday morning, started with children in action using balloons and dancing. Commenting on the design of the church building, known locally as “The Tent” due to its tent-like shape, Territorial Commander Commissioner William Cochrane commented on how “at home” The Salvation Army—whose first meetings were held in a tent—felt in such a location.
Tórshavn Band from The Færoes provided music throughout the weekend, and other highlights included testimonies and solos.
At least five people made the decision to become soldiers and others were challenged by a call to officership during the weekend.