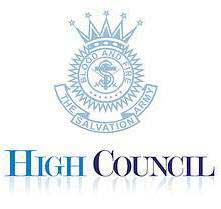 The Chief of the Staff, Commissioner André Cox, has summoned members of the High Council to meet on 29 July 2013 for the purpose of electing the 20th General of The Salvation Army. All leaders who are commissioners on active service or who are territorial commanders or territorial presidents of women’s ministries of whatever rank qualify for membership of the High Council.

This High Council will be the largest in the history of The Salvation Army. There will be 118 members – 64 women and 54 men – with an average age of 59. Fifty-four will be attending a High Council for the first time. Twenty-six have appointments in the Americas and Caribbean Zone and 24 in the Africa Zone. The South Pacific and East Asia Zone supplies 21 members, Europe 18 and South Asia 15. Fourteen International Headquarters commissioners complete the total of 118 members.

The High Council will not meet at its usual venue of Sunbury Court in Sunbury-on-Thames, United Kingdom, as this historic venue is presently undergoing a major refurbishment. Instead, it will meet at the Renaissance Hotel, near Heathrow to the west of London. This is not the first time the High Council has convened away from Sunbury Court – in 1934 and 1939 proceedings took place at Clapton, in the East End of London.

The Chief of the Staff will preside over the opening of the High Council until such time as a president and vice-president have been elected. The deliberations of the council will then be directed by the president, preparing the way for nominations for the office of General and the election of the next international leader of The Salvation Army.