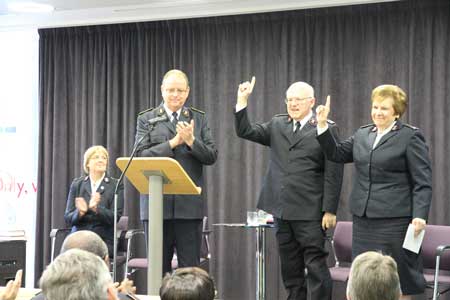 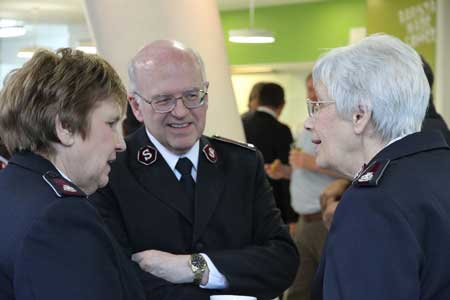 A sense of fun and relaxation at the International Headquarters (IHQ) welcome to the Chief of the Staff (Commissioner William A. Roberts) and Commissioner Nancy L. Roberts (World Secretary for Women’s Ministries) did nothing to mask the spiritual task facing the new leaders. However, the Chief refused to be intimidated – telling the staff and officers gathered that in his own strength he would fail, but that God would give him the power to succeed.

General André Cox welcomed the Chief and Commissioner Nancy Roberts, highlighting their ‘great international experience’ and assuring them: ‘God has been preparing you.’ He also greeted special guests Retired General John Larsson, Commissioner Freda Larsson and Commissioner Gisèle Gowans, and recognised the presence of delegates to the 219th session of the International College for Officers.

Commissioner Nancy talked about the ‘very interesting journey’ she and her husband have been on, adding that they feel ‘privileged to serve God and The Salvation Army around the world’. She added: ‘We come [into these roles] having faith and trust in the Lord.’ Speaking about her certainty that people need the Lord, she told the congregation that ‘people today are caught in a web of challenges’ – and that God has the answers.

Commissioner Joash Malabi (International Secretary for Africa) read from the Scriptures before Commissioner William Cochrane (International Secretary to the Chief of the Staff) welcomed the Chief. He described the new Chief of the Staff as being ‘chosen by the General and anointed by God’ and told him that, while many people would know him as an effective administrator, ‘I know you have a pastor’s heart.’

‘You bring strength, courage, integrity and experience,’ he concluded, ‘but above all a great heart for the work of The Salvation Army.’

The General and congregation applaud as the Chief and WPWM salute

The General prayed for the new international leaders, asking that God would give them ‘wisdom, grace, strength and courage.’

The Chief of the Staff spoke about his experience since he left IHQ in December 2007. He told the congregation: ‘We have seen the world from another perspective … We appreciate what we are and who we are,’ he explained, ‘as well as appreciating what we are not and who we are not.’ This international experience has made him realise ‘we are all connected … The same God made us all, so we are all related – our Father is the same!’

The Chief recalled meeting a man in Kenya called Moses, who had received an education through a Salvation Army school for the visually impaired. Moses, who is now a teacher, told the Chief that if it was not for The Salvation Army he would probably have ended up living as a beggar.

‘All over the world,’ said the Chief, ‘in mud-walled rooms, places without roofs, under trees, in modest churches or great cathedrals … lives are changed – we have seen it again and again. Life can be better than it is – because of God.’

He concluded with an admission that, even after 42 years as a Salvation Army officer, he is still surprised by God, before calling for this surprising God to be ‘God of our lives, God of his Salvation Army and God of this IHQ’.

Music support before and during the meeting was provided by a band and a gospel choir made up of staff and officers from IHQ.

Photos of the event are available on the International Headquarters Flickr site: sar.my/wcoswr