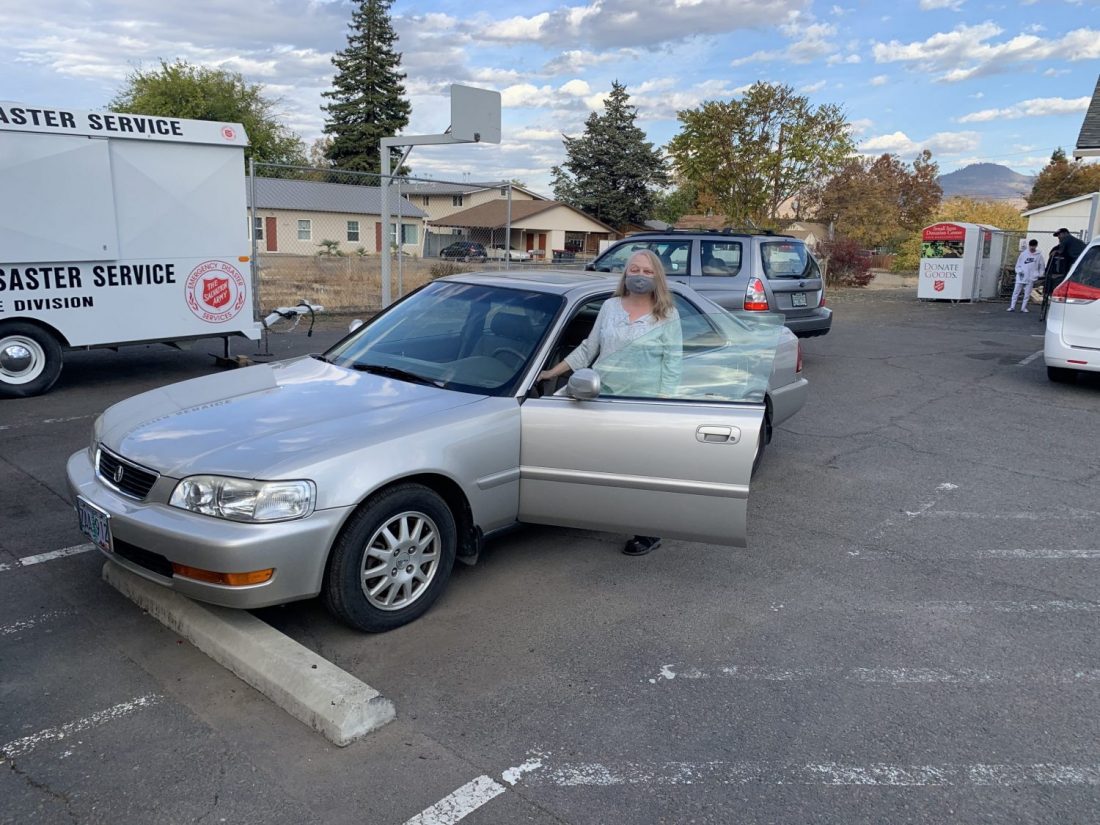 Partnership matches vehicles to individuals and families in need

When the Obenchain Fire ripped through Laura Walmsley’s property in Eagle Point, Oregon, in September, it took her home, two cats and Mercedes with it. When she details the loss, she’s quick to refocus on the fact she dwells on: her sons survived.

“My boys are alive. They’re alive!” she said. ”If they had slept another 30 minutes, they would have been dead, because we had so much foliage around our house and our house is so old, and it’s all made out of wood. And man, that place went up so fast…You’d think that something would be left behind, but nothing is left behind. Anything that could burn, burned.”

All of their belongings were destroyed, sans a porcelain foo dog, an iron skillet and an iron pig with wings. The Mercedes she owned had a new radiator, new tires and new radio, but with a dead battery, it couldn’t be moved and it succumbed to the flames. It’s still there, sitting with the rubble awaiting cleanup, while Walmsley and her sons live with her sister and wait for a FEMA trailer.

Still, Walmsley is moving forward, in part with the help of The Salvation Army in Jackson County that has matched her with a car of her own through a partnership with Medford-based auto repair shop Kelly Automotive.

Following the Oregon wildfires, The Salvation Army Jackson County continues to respond, offering various forms of assistance and spiritual care. It shared the need for vehicles for survivors of the fires, and Kelly Automotive came forward wanting to help.

“We’re hoping that, when this is all said and done, we will have been able to help The Salvation Army give away 15 to 20 cars,” Kelly Automotive owner Dave Kelly told KOBI-TV NBC5, who added that finding cars to donate has been easy—community members want to help out.

The donations run the gamut of vehicle offerings, from Subarus to pickup trucks, a minivan and even a hybrid car. Once cars are donated, Kelly Automotive makes repairs so the vehicles are ready for use. The Salvation Army then helps match the donated vehicles to individuals and families in need in the area, and it has benefitted both sides.

“One vehicle that an elderly husband had bought for his elderly wife…she could be passing away in the next few months or so,” said Jackson County Coordinator and Medford Corps Officer Major Jason Koenig. “She wanted to make sure that this vehicle went to someone in need, so we’re trying to also make sure we match that to the right person, and so she will then be aware of what happened with her vehicle.”

Some of the recipients, like Walmsley, lost everything—their house and their vehicles. Others’ homes were spared, but their vehicles were destroyed, like a family who was matched with an SUV. When it’s time to turn over the keys, Koenig said the response has been emotional.

“They have been very excited. Even in trying to maintain COVID-19 safety, lots of them just throw that out the window and grab and give us hugs because they’re just so excited about this,” Koenig said.

Walmsley was matched with a burgundy 2002 Jeep Liberty Sports that had 150,000 miles. She said having her own vehicle again has helped make sure she could go to her doctors’ appointments, and she looks good while she’s doing it, noting “boy am I cute in that car.”

“It’s really something when you start to receive things and you were always looking to give things,” she said. “It puts me in a very humble and grateful and thankful place…I’m alive and my boys are alive and thank God we’re alive! I love my little Jeep—cutest little thing ever in the whole world and I enjoy it so much.”

For now, Walmsley’s living in the Christmas spirit, decorating her sister’s home and she wants to put a wreath on her Jeep, too. A sign and window painter by trade, she wants to decorate the Jeep’s back window to say, “Thank you, Salvation Army.”