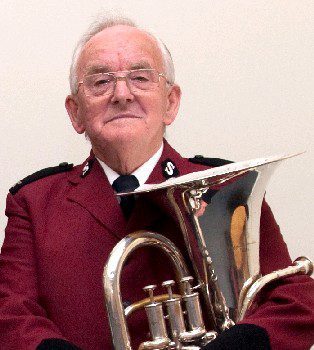 A musician who has clocked more than six decades as a bandsman at The Salvation Army’s Sheffield Citadel is to retire from playing his beloved euphonium in public.

Alf Wileman is a name synonymous with Salvation Army banding, recognized the length and breadth of the country by countless Salvationist who have been taught and inspired by him. Now, after over 65 years’ service as a bandsman at Sheffield Citadel, Alf has decided to hang up his instrument case and retire from active participation in the band. Alf had been playing alongside his son, Paul, and grandson, Ryan, meaning that the band will sadly no longer have three generation of the same family in the band.

And to celebrate Alf’s amazing achievement, including the brass instrument teaching of hundreds of children over the years, a special celebration service was held in his honor on Sept. 10 at Sheffield Citadel in Psalter Lane at 6.30 p.m. Many will want to come along to share in this event and to mark everything that Alf has done for so many musicians within the Army world.

Alf was commissioned into the senior band back in 1943 starting off on solo horn, moving on to solo cornet and then soprano cornet before finally taking up his place on the euphonium bench in 1949. Some 60 years later, Alf is the Principal Euphonium player at Sheffield Citadel and his playing has blessed and inspired countless listeners over those years.

Alf, who lives in Dronfield Woodhouse, said: “I’ve always considered my instrument to be an effective tool for communicating the gospel to everyone who has been an important part of my ministry. But after 66 years I feel the time is right now to retire and leave my son and grandson to keep the Wileman name alive in the band.”

Alf’s service has not been confined to the ranks of the senior band at Sheffield and he is perhaps better known in Army circles for his work with young people. In 1967, Alf became YP Band Leader at Sheffield and hence began his 23 years in a role where many describe him as “the best bandleader in the world!” Such was his influence upon so many youngsters that even now, decades later, so many of them count it a privilege to have played under his leadership and are grateful for the positive influence and encouragement which he had upon them as youngsters.

Alf was the first bandmaster of the South Yorkshire Divisional Youth Band, which he set up with Captain Jack Flounders, divisional Youth secretary at the time, back in 1980. He was a natural choice for this role since he had been one of the original musical staff at the South Yorkshire Divisional Music School since its commencement in the 1960s, working alongside Maisie Wiggins for many years.

Alf finally put down his baton in 1990, retiring from the YP Band, Divisional Youth Band and music school after many years working alongside the young people in South Yorkshire. He continued in his peripatetic brass teaching until this summer, having taught and encouraged thousands of young people along the way.