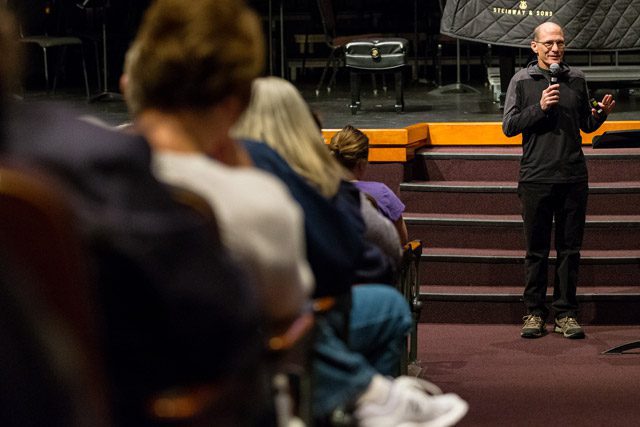 A prescription for wellness

Kroc Rx could be coming to your town.

Created one year ago by Dr. Joseph Abate at The Salvation Army Ray and Joan Kroc Corps Community Center in Coeur d’Alene, Idaho, Kroc Rx has been so successful so quickly that other communities have taken notice. Almost 500 low-income patients battling depression, obesity, diabetes, heavy reliance on prescription pain medication and other challenges have now graduated from the eight-week program.

“As a society, we’ve convinced ourselves that the way to get people better is to do high tech imaging and hand out prescriptions,” said Abate, medical director of Heritage Health in Coeur d’Alene and a cardiologist for 27 years. “But it’s so much simpler than that. Getting people moving. Getting people feeling better about themselves. It’s a pretty simple prescription.”

Kroc Rx starts with Heritage Health medical staff recognizing when a patient could benefit from supervised exercise at the Kroc Center in Coeur d’Alene, where social integration also can be part of the cure. Patients who complete the eight-week program undergo exercise that ranges from walking in a pool to more strenuous activities while also receiving nutritional and behavioral health support.

The Kroc Rx program has drawn national attention, and in early March, Abate spoke at a territorial meeting of Kroc and community centers.

“They got a chance to hear this, and they’re very interested in looking in their communities and finding out what medical facilities they can partner with to try to replicate this program,” he said.

“The site reviewers saw this as a unique program and they would like me to speak statewide and on a national basis to show them what this program looks like and to talk to them about how they might be able to create more change in their patients’ lives,” Abate said.

“Insurance companies are also very interested because they see that for a $30 a month [gym] membership, we can change people in a way that’s equivalent to thousands of dollars in medications,” Abate said. “We’ve been able to stop medications that cost $1,000 a month just because of an eight-week program.”

In the first year of Kroc Rx, Abate said roughly 95 percent of the patients who entered the program completed it.

“I think there’s only about 5 percent of patients or less who either find it too overwhelming or their life circumstances prevent them from completing the eight-week program,” he said. “There are people who miss some of their visits, some who don’t come as often as we’d like them to, but they’re making the best effort they can.”

The success stories are becoming too numerous to count. Abate described one recent graduate who had been in Heritage Health’s chronic pain program and was receiving high dosages of pain medication.

“When I first saw her, she could barely walk,” he said. “Now I see her all over town. She still has pain, but she’s smiling. She has her life back.”

So does Heather Hjelmstrom of Post Falls, though it took some convincing.

“When this program first came to my attention I wanted nothing to do with it,” said Hjelmstrom, 37. “I’d heard about it but I just knew the gym wasn’t for me.”

Interviewed six weeks into her eight-week program, however, Hjelmstrom was emotional in recounting her change of mind.

“I made a decision that I was going to go full bore and beat this,” she said. “I call it my ‘fat suit,’ because I know underneath it is something better.”

For Hjelmstrom, serious problems began years ago with her addiction to methamphetamine, which she said she replaced with an addiction to food.

“I began to associate every emotion with food. You know, like when you’re happy you celebrate with cake or pizza,” she said. “When something amazing or sad happened, food was always involved.”

But she said Kroc Rx has been a prescription for happiness, even as she continues to work on losing weight by walking the indoor track with her wellness coach.

“When I first started coming here, I could barely do two or three laps around the track,” she said. “I hurt so bad I’d leave here and go cry in my car. But I did 20 laps yesterday on that track. I’m tired and sweating, but I’m not crying, and I know I can do more.”

For Hjelmstrom, it’s a new world.

“When I walk through the Kroc Center doors, everybody smiles at me,” she said. “Several people even know my name now. For a person who felt invisible for the better part of my life, I don’t feel invisible anymore. Quite the contrary, actually. I feel like I’m a superstar.”

And, she said, a better mom to her 16-year-old daughter and 9-year-old son.

“I’m trying to model better behaviors, better actions. I’m trying to show them instead of tell them,” she said.

For the founder of Kroc Rx, how has a year of dramatically changing people’s lives impacted him?

“I’m very passionate about this, and I’m overwhelmed by the success,” he said, fighting back tears. “It’s not of me. I’m just trying to do what God wants me to do. I don’t think I can take any personal credit for the success of this program.”