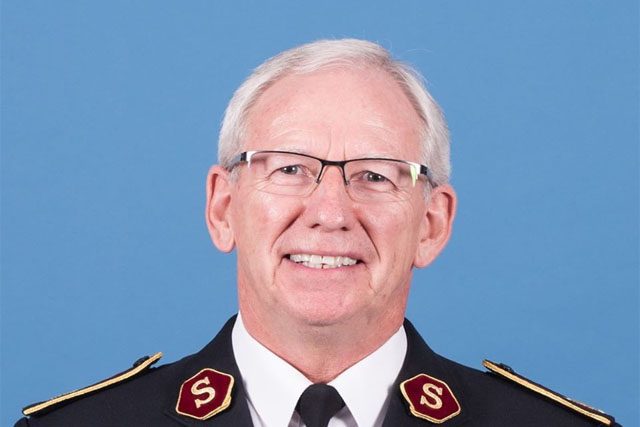 It’s the start of a new year, a new decade—2020. The Salvation Army enters this new year with the same mission it has had since 1865: to preach and to serve. So where are we at the outset of 2020 and what is to come? General Brian Peddle recently appeared on the Do Gooders Podcast to share exactly that.

Originating from Newfoundland, Peddle was elected as The Salvation Army’s 21st General in 2018. A Salvation Army officer since 1977, Peddle has served in the Army from Canada to New Zealand to the United Kingdom. In the interview with Editor in Chief Christin Thieme, excerpted here, he addresses his call to mission and where it stands going into this new year. He also offers his twofold priorities for 2020.

Christin Thieme: As The Salvation Army’s international leader, what were some of your favorite moments of 2019?

General Brian Peddle:  I’ve been at so many commissionings and ordinations…I really reflect upon those occasions with new officers from the perspective that that’s one of the incredible aspects of God’s evidence of his blessing on the Army. I say that because I don’t think God is calling people to waste their lives, so this is one way that he’s blessing the Army—by calling people.

At the start of 2019, you issued a call to mission asking Salvationists to be ready, to be positioned to do what God is asking us. And you said that it’s about being engaged and to take responsibility for the mission that God has given us. How do you think that call has changed or developed in the past year?

I think for me, personally, my sense of conviction around that call has deepened. It was never meant to be something that would overshadow territorial strategic plans or vision statements or anything like that. My call to mission was intended to sign post The Salvation Army in a way in which we would be faithful and obedient to the mission of God in the world. And for all intentional purposes, that’s about preaching the gospel and serving suffering humanity without discrimination. We have to tick those two boxes in everything that we do.

That leads us into this year, and the call continues. We’re at the start of a new decade now; what do you see as the biggest opportunities for The Salvation Army in 2020?

I think it’s about going deeper and it’s about finding your place in the midst of increased secularization. I believe there’s a marginalization of faith going on in the world where once upon a time we were viewed as value-added in our communities, in our societies, and even viewed as value-added by governments and funders. I think at this particular point in our journey, by our fruit, we have to demonstrate that we deserve the respect that we so much wish for. So I think it’s about a challenge that comes to The Salvation Army to be true to its purpose, to its mission, and to let people judge us, not particularly on our orthodoxy or our ecclesiastical statements, our doctrines, but judge us on the work that we do, the service that we give, the embracing of our communities that we provide and let our fruits speak for themselves.

As General, what would you say your priority is for this year?

There are two sets of priorities, I suppose. One is very internal to The Salvation Army. That’s a priority of making sure that we’re resourcing the international Army. We don’t have a level playing field in the Army, and that comes out in our economic platforms. It comes out in our leadership capacity and development. It even pops up in the whole gender equity issue, and I think we’re looking at a priority internally in the Army to address some of these issues. To equalize service platforms and to make sure that we’re working well as an international, global Salvation Army…I think we continue to leverage again on the whole idea of making us fit for purpose, and that’s not just for today.

That’s crossing over the generational divide to embrace, engage the millennials, if I could use that term, and younger generations. I’ve called The Salvation Army to nurture and raise up generations for the Army’s future. I’m going to pass on at some point. There needs to be others who are taking the places of those who are going through, generationally through, The Salvation Army. So I’m very keenly interested in generational transfer of faith, of service and this commitment we have to serve suffering humanity.

And on another issue we often hear about—this being a post-Christian culture, with many people identifying as non-religious. What’s your take on that and if that is the case, how are we planning to reach people and adapt to this culture?

I don’t think we can ignore the reality. I think most of the surveys would say there’s an opposition to the institutional religion, but it doesn’t mean that people are not religious. So we have to find our way through the myths of that reality. Notwithstanding the fact, I think there are now literally millions of people in the world who are non-religious, who have had no foundational training, who have never been in a Sunday school class or read a Bible story, or know who Noah is or Daniel in the lion’s den—none of that resonates. And I think we have to, as a church, as a Salvation Army, we have to know our audience and know where to begin the story. If you begin the story in the fourth or fifth chapter and you miss out on the foundational realities, we’re not going to be successful.

If we try to do something that’s not relevant for the age in which we are living, if we miss out on the digital world in which people are living…When I was at Orchard Beach this summer, I saw so much creativity that it pulled crowds and crowds of people toward the gospel. And I think The Salvation Army still knows how to do that. We just have to take the time to be creative and get past this idea that it’s post this and post-truth and oh my goodness, there’s still a responsibility for us as Salvationists to remind people, to show people, to sign-post people to that which is important and that which will last. What scares me most is that maybe people are going to come to the end of life and all that they’ve had up to a certain point, it’s not going to be enough. And then who tells them? Who shows them the way?

What would you say it means to be a Salvationist today?

If Salvationists are answering those questions, then they’re plunging the depths of God’s intentional purpose for them. If they’re doing that and they’re responding, there’ll be the best Salvationists of any generation to this point.

And what would be your message to Salvationists around the world now as we start this new decade?

I think I would have to remind everybody that there’s a calling upon The Salvation Army. And when I express my initial thoughts around a call to mission, I accept the fact that every denomination, every para-church group, perhaps, has a calling upon it. But I’m of the conviction that The Salvation Army fills a unique place in our societies, in our communities. We stand in the gap for so many people. We are bridges that help people cross from one side to another.

I just need, you know, 1.5 million soldiers who will keep doing that. This is not about us, it’s about how we serve, how we impact the world. And I would want this to be an Army that’s enthused about its role, about its DNA, and is ready to march forward into this decade—2020. Not with 2020 vision, but with a vision that’s God’s vision.