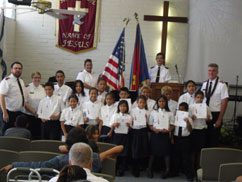 Hawaii’s Hilo Temple Corps, led by Lieutenants Craig and Marianneke (Anney) Summerfield, is experiencing a season of growth, with recent senior and junior soldier enrollments—for a combined total of 22!

On Aug. 1, 2010, the corps enrolled six new senior soldiers. They came from a variety of backgrounds, from brand new Salvationist (Nellie), to life-long corps attendee (Nicole), to thrift store employee (Steven), to teenagers taking more active roles in the corps (Kenan and Jeffrey), to someone who had returned to the Army after growing up attending a corps on the East Coast (Tina).

Senior soldiers
While we had tried to start senior soldier classes for about a year, the time was never right; no one showed interest. This year, however, we have been encouraged and inspired, and now two more people would like to be enrolled! This renewed dedication and commitment to the kingdom through the ministry of Hilo has been uplifting not only to us as corps officers, but also to the rest of the congregation. We are excited for what lies ahead!

Junior soldiers
Totally focused: This is one of the sayings and promises taught during the preparation course for junior soldiers. After months of finding the right time, place, and people, we were finally able to totally focus on preparing the children of Hilo Temple Corps for further commitment to Christ and The Salvation Army. This spring, through the help of teachers Lila Parong and Nicole Parong, 16 youth completed their junior soldier preparation classes and were enrolled by Hawaiian and Pacific Islands Divisional Commander, Major Edward Hill. It was a delight for the Hilo Corps ohana to see the children who have grown in the corps take this step of commitment, especially being able to see them all in sharp-looking uniforms! Many of the children were supported by the presence of their parents, some of whom had never before attended a Salvation Army service. Parents, corps members, and children alike were encouraged to uplift the new junior soldiers in prayer, keeping them accountable for the promise they have made, as well as to be an example for those growing in their faith.

We praise God for the growth in Hilo!