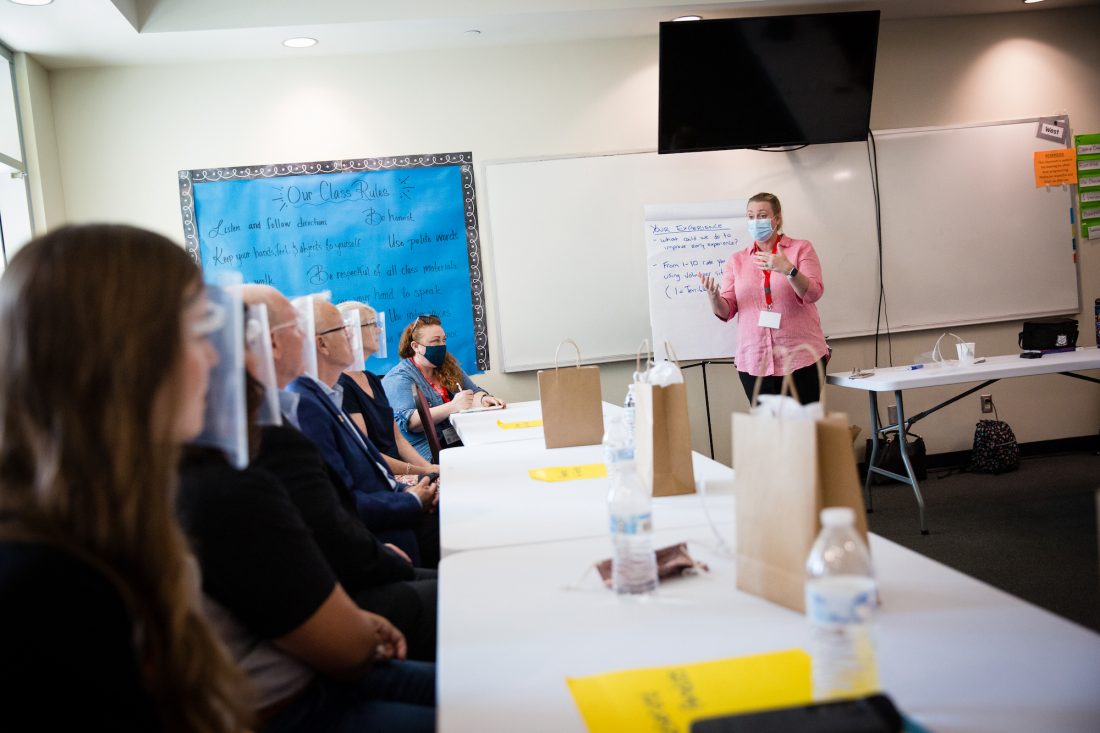 The Western Territory’s development professionals gathered at The Salvation Army Ray and Joan Kroc Corps Community Center in San Diego, California, Aug. 30–Sept. 2 for the Doorway to Opportunity conference, an event inspired by the need for collaboration following the cancelation of the 2020 National Advisory Organizations Conference in the early days of the pandemic.

Over the course of the three-day event, delegates participated in plenary and breakout sessions alongside their counterparts from other divisions and commands to learn, collaborate and share best practices. Tracks were provided in a number of disciplines, including communications, corporate engagement, digital fundraising, direct marketing, donor relations and officer leadership. 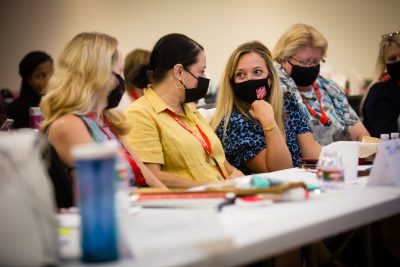 “Without money there is no ministry,” said Communications Secretary Lt. Colonel Kyle Smith. “The ministry we do changes lives; it changes the direction of life; it changes family history.”

That ministry was evidenced through testimonies shared during the plenary sessions. A father shared the story of how the San Diego Adult Rehabilitation Center played a vital role in his daughter’s sobriety. A school principal shared how going to Camp Gilmore as a child impacted her worldview and life trajectory. A single mother shared how living at the Door of Hope helped her get back on her feet.

“Donors give when you touch their hearts and brains,” Thompson said. “It is a delicate balance.”

Other sessions featured the RKD Group, whose representatives spoke on “Making Sense of Your Data,” Summit Marketing, which presented on “Embracing the Transformational Donor Experience,” and Amergent, which covered “Year-round Donor Advised Funds Donor Development Practices.” 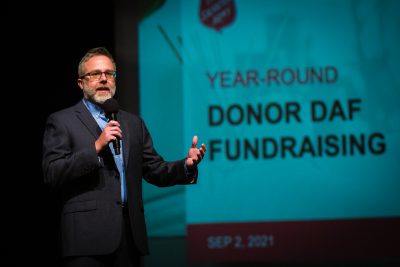 Jon Lee of the LERMA Agency spoke about what the Christmas 2021 Red Kettle Campaign will look like for The Salvation Army, as it aims to combat pandemic poverty. Lee noted that The Salvation Army has spent more in the first six months of 2021 in rental and food assistance than in all of 2020. To keep up with the need, the Army will need to raise $175 million during kettle season—an almost 50 percent increase from the funds raised in the 2020 Red Kettle Campaign.

“Every time we work together to ask America to help, America comes to help,” Lee said.

The evening of Sept. 1, delegates attended the Western Territorial Development Awards, held in the Kroc Center’s theater following a catered dinner with music provided by California South Divisional Music Director Kevin Larsson. Centerpieces for the dinner were made by kids at the San Diego Kroc Center this summer, and featured tags where they shared their dreams, which ranged from becoming “a cat” to being “successful” and “liked.”

“Kids have dreams and aspirations and we’re here to help them live those out,” Smith told the delegates before San Diego Kroc Center Corps Officer Major Rob Birks welcomed and thanked delegates for their work, telling them, “We need you and we need you to understand how important you are to Jesus and his movement known as The Salvation Army.”

Birks then introduced a group from the Kroc Junior Theatre, which performed a musical number from “The Lion King,” “Hakuna Matata.” A junior leader from the Kroc Center named Bean then spoke of how the Kroc Center was a “safe” space for her to figure out who she is and give back. 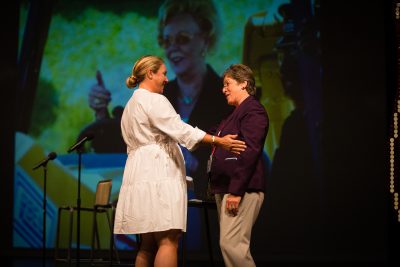 Debbie Rossi, Territorial Executive Director of Development, took the stage to begin the awards portion of the evening.

“Once a year we try to recognize our super performers,” Rossi said. “You guys are the engine that is driving The Salvation Army…Money is needed to provide for everything we’re doing for our neighbors.”

Following the awards presentations (complete list below), Territorial Music Education Specialist Matthew Woods sang “We’ve Come This Far by Faith” and Territorial Commander Commissioner Douglas Riley spoke of perseverance, noting the feats currently happening at the Paralympic Games as well as the past Olympic story of the rivalry between swimmers John Nabor and Vladimir Raskatov, which lead to record-breaking, gold-medal-winning performances over several editions of the Games.

“You might not always hear us cheering you on, but we are,” Riley told the delegates. “You make us proud.”