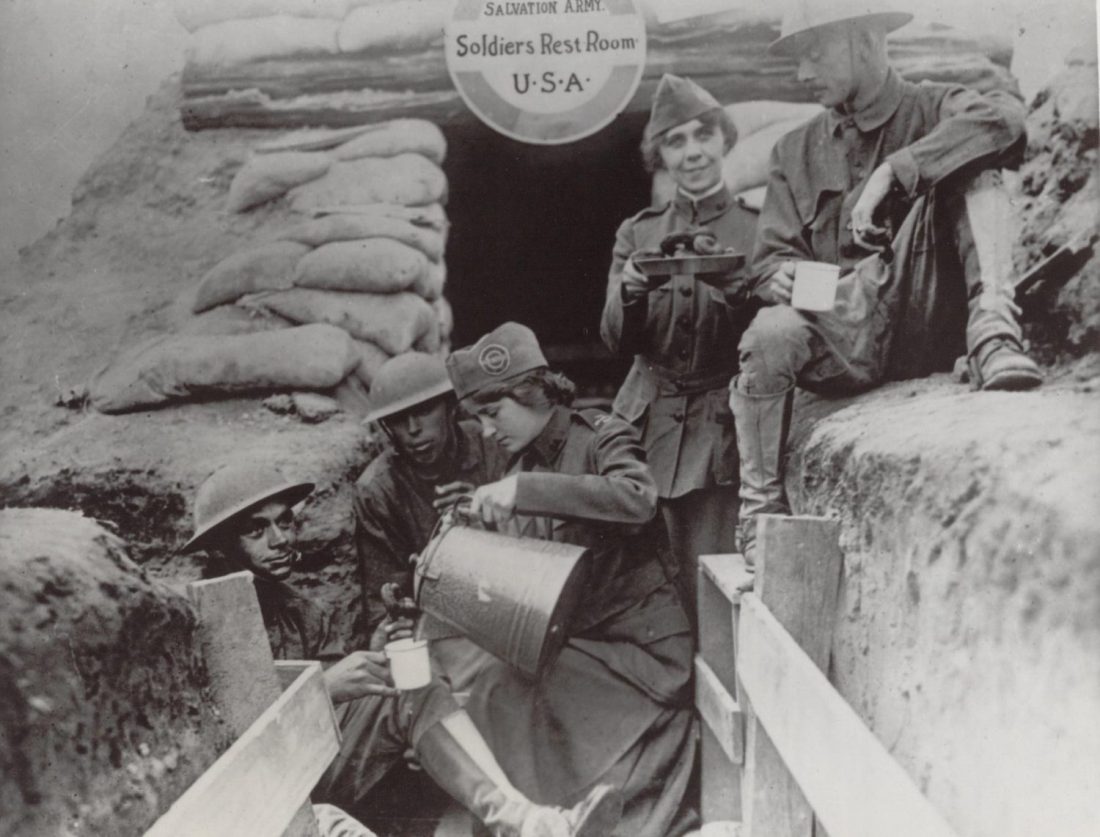 The following comes from the original journal of one doughnut girl, Alice McAllister, who joined the 1st Division of the American Expeditionary Forces and was sworn into the U.S. Army as a private—the only way she could volunteer on the front lines of World War I. With guitars in hand, Alice and her sister Violet McAllister performed for the troops, set broken bones and immunized for tetanus, but they became known for a simple luxury while at war, the doughnut. Her story is recorded in “The Doughnut Sweethearts: The Diary of Alice McAllister during World War I” (Frontier Press, 2012).

One day, I was working my way up one side of a big tent full of wounded [men] lying on litters. A boy said, “Sister, my buddy is very badly wounded and he is on the last litter on the other side. Will you take care of him first? I can wait.”

I walked down the long row to the last litter and looked down into the face of a handsome young boy, probably no more than 18 or 19 [years old]. Blonde curly hair clung to his forehead, where beads of perspiration told of his suffering. He seemed to be murmuring something and I knelt down beside him and leaned closer to hear. He was saying, “Mother, Mother.”

I laid my hand gently on his damp forehead and said, “What is it, son?”

His eyes flew open and looked long and earnestly into my face. Then a light seemed to dawn in his eyes and his whole face lit up with joy and he exclaimed, “Mother! I knew you would come. I knew you would come.” I took his hand in mine and he closed his eyes again and seemed to sleep, but presently he was speaking again and I leaned forward to listen. He was saying, “Mother, I want a drink.” I rose quickly and went to the bag of water hanging [at] the end of the tent. I brought water and some cotton and moistened his lips and swabbed out his mouth, for I could not let him drink as he had a machine gun bullet in his abdomen. He made a face and said, “It tastes awful!” I knew it did. It tasted of some horrible disinfectant, for no water anywhere around us was fit to drink. It was hauled in, in barrels. I bathed his face and hands and tried to make him comfortable. Soon he opened his eyes and said, “Mother, couldn’t you bring me a drink from the spring?”

The spring! Immediately I saw what I felt sure he was seeing. I was a small girl again, running through the garden to a little vine-covered house where a spring welled up continually and overflowed in a pool built around it, in which were the large covered crocks containing butter and milk. I trailed my fingers in the cold pool and drank of the refreshing ice cold water welling up from the depth[s] of the earth. “A spring of water in this place of dead fountains?” I thought.

Suddenly my eyes were streaming with tears and I rushed down to the door of the tent, praying as I had never prayed before, “O God, we must have water—ice cold water from a spring.” I lifted the flap of the tent and looked up and there I saw hills surrounding us on every side. Suddenly it seemed as though a voice spoke in my mind: I will lift up mine eyes unto the hills, from whence cometh my help [Ps. 121:1 KJV]. Of course! There must be water somewhere in the hills. I went flying across the compound to where our little Ford pickup stood and to our faithful driver and protector, Adjutant Billy Hale.

“Billy, Billy!” I cried breathlessly, “Do you see those hills yonder? Well, somewhere up there, there is a spring and we must have water—ice cold water from a spring.”

He looked at me and said, “My girl, if there is water in those hills, I will find it.” He loaded a 25-gallon tank and some buckets in the pickup and started off. I returned to my work with a glad heart, feeling sure that it would be so. I washed faces and hands and said words of comfort and cheer and returned often to look at the lad at the end of the litter. He seemed to be sleeping.

Then, as the afternoon wore on, the tent flap lifted and I beheld the beaming face of Billy Hale. I rushed outside and there, in the back of the pickup truck, was a large tank of the most delicious, coldest water I had tasted in many a day.

Billy said he went along the main road looking for some trace of road leading back into the hills and finally he saw some cart tracks and he turned to follow them. They led a long, long way into the hills, but finally came to an end beside a spring of water gushing up out of a rock. He took his bucket and proceeded to fill the large tank and here it was. The most unbelievable had

happened! I carried some of the water back into the tent and knelt beside the boy and whispered gently, “I have brought water from the spring.” I moistened his lips again and again and bathed his hands with that wonderful cold water. He sighed his content and slept again.

I gave the wonderful cold water to all who were able to drink and moistened the lips of those who could not. The doctors and hospital corps men came to the truck to drink and marvel. “Where did you get it?” asked a doctor. I said it came in answer to prayer for a boy who

begged his mother to bring him a drink from the spring. Then I told him about lifting my eyes to the hills and that Billy Hale had been led to the spring.

Every day while we were there, Billy brought the water down from the hills. We happened to have a crate of lemons in our possession and so every spare moment we had, my sister and I squeezed lemons, and so the water was made into lemonade to the delight of all concerned. My young lad was taken away to a hospital and my prayers went with him. I hope that God spared his life to go back home to his mother, in Indiana I think it was.

Excerpted from “The Doughnut Sweethearts: The Diary of Alice McAllister during World War I” (Frontier Press, 2012). Find it here.

Alice McAllister joined the 1st Division of the American Expeditionary Forces and was sworn into the U.S. Army as a private—the only way she could volunteer on the front lines of World War I.