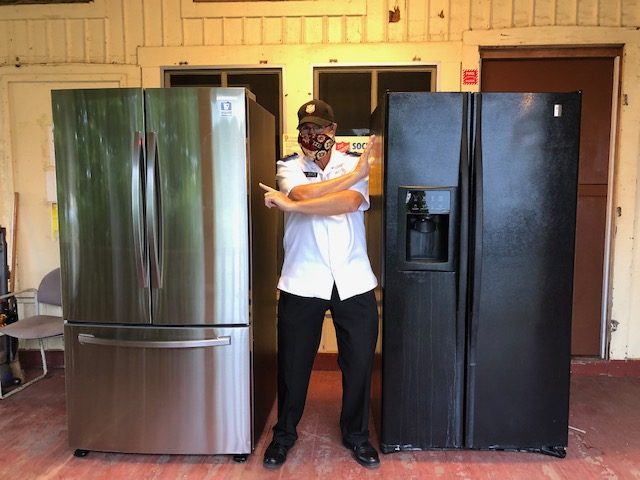 ‘Twice blessed’ to be a blessing

On the Big Island of Hawaii, The Salvation Army Honoka’a Corps and the community take care of each other, no matter what—even in a pandemic. The boomerang nature of giving and receiving resulted in the Honoka’a Corps being “twice blessed” in the same week, according to Ministry Leader Envoy Gary Todd.

“The Salvation Army provides food, clothing, shelter and guidance for those in need, and often receives help in return from very unexpected sources,” Todd said.

The corps plays an important role in the small town of Honoka’a, which is the largest town along Hawaii’s picturesque Hamakua Coast and home to about 2,100 people. It’s located 40 miles north of Hilo and just a 15-minute drive south of Waimea.

The small towns along the coast emerged when “sugar was king in Hawaii, and sugar plantations flourished in this area,” according to HawaiiLife.com. Starting in 1875, the sugar industry thrived. Its decline began in 1946, when a tsunami struck the Hamakua Coast and destroyed the railroad—vital to the industry—which was never rebuilt.

“The Honoka’a Corps was a very active place until sugar cane was no longer king on the Big Island,” Todd said. “Honoka’a became an outpost in 1999, with only volunteers and soldiers like myself keeping the corps active.” On Oct. 1, 2011, Honoka’a reopened as a corps.

After he was mentored by Salvation Army officers Major Carol Ganot and Major Angie Sholin, Todd became Corps Sergeant Major. In 2017, then Divisional Commander Major (now Lt. Colonel) John Chamness asked Todd to become the Ministry Leader, with the title of Envoy, for the corps and all of North Hawaii.

Although he and his wife were in their early 70s, they worked hard to involve the community in the corps ministry and outreach, conducting Sunday worship, prayer meetings, Bible studies and a food pantry. They have kept the corps operating throughout the COVID-19 pandemic.

According to Todd, each month an average of 1,200 residents receive food from the corps’ weekly food pantry. During the 2020 holiday season—despite the pandemic—the corps delivered 230 Thanksgiving meals Nov. 26 and distributed 340 Angel Tree gifts Dec. 21.

The first blessing to the corps involved the building’s lanai, or porch, which was erected in 1883 and purchased by The Salvation Army at auction in 1956.

“Because the corps ended the fiscal year in the black, it was a good time—as suggested by Hawaiian and Pacific Islands Divisional Commander Major Jeff Martin—to repair the lanai,” Todd said.

He contacted Donovan and Wendy Keliikoa, who run a local home repair service. While discussing the repair estimate, the couple said that because the corps and thrift store helped them in the past, they wanted to do the restoration at no charge as a way to pay it forward.

The wide lanai covers two sides of the building and looks out onto a grassy area between the building and the street. The space is perfect for drive-in church services, which have taken place during the pandemic. Over the years it has also hosted concerts, Easter community services, First Friday town vendors and parade spectators.

The second blessing came that same week—the replacement of two refrigerator freezers. As part of the Hawaiian and Pacific Islands Division Emergency Disaster Services response to COVID-19, the corps’ food pantry also remained open. After three unsuccessful attempts to secure funding from the local electric company to replace the inefficient, aging units, one of them failed completely, leaving the corps kitchen without a usable refrigerator.

The second unit in the food pantry, identical to the kitchen refrigerator, seemed destined to die any day. Todd contacted the divisional grant department to secure funding for two refrigerators. The grant search had barely started, when a long-time vegetable donor to the Honoka’a Corps food pantry presented Todd with a check for $2,500.

Todd visited Home Depot, where he found two Samsung refrigerator freezers (only two of this model in stock) discounted by $700 each, available for a merchandise total of $2,596 for the two units.

While the corps has been “twice blessed,” the blessings continued to flow, according to Todd, who said that the Kelikoas decided to renovate the entire corps building at no charge.

“‘Doing the Most Good,’ even when it’s done quietly, gets noticed and appreciated,” Todd said.

He’s worked to get the community involved in the corps’ activities, starting by visiting churches, businesses, organizations and volunteer groups to enlist their partnership.

“Slowly at first, then faster each year, individuals and volunteer groups partnered with the Honoka’a Corps,” he said.