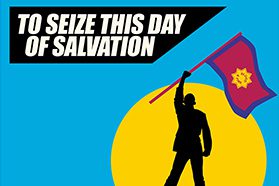 Raders to launch book at congress

Signing for “To Seize This Day of Salvation” slated for July 2.

Salvation Books, the publishing imprint of International Headquarters (IHQ), announced three new books by former international leaders of The Salvation Army that will be published in partnership with Frontier Press and launched at the 150th anniversary international congress, Boundless – The Whole World Redeeming.

As The Salvation Army’s international leaders, the Raders traveled widely, inspiring Salvationists and others to preach the gospel of Jesus and meet human needs in his name. In this book, they explore vital themes that lie at the heart of The Salvation Army’s vision and mission, making it clear that the issues are not only perennial—they are urgently relevant to this day of salvation.

“To Seize This Day of Salvation” will be launched at Boundless 2015 at The O2 in London with the authors holding a book signing in The SP&S Shop July 2 from 3-4:30 p.m. It will be available to order soon after.

Read a review of the book by Dr. Robert Docter, O.F. here.