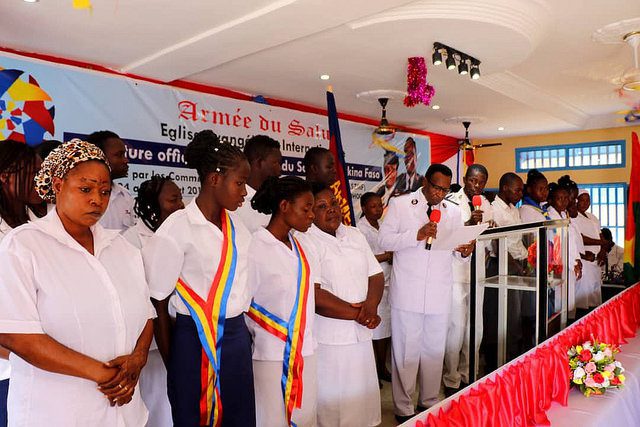 Celebrations marking the official opening of The Salvation Army in Burkina Faso took place Aug. 25–26, overseen by International Secretary for Africa, Commissioner Benjamin Mnyampi and Zonal Secretary for Women’s Ministries, Commissioner Grace Mnyampi. Held in the capital city of Ouagadougou, the festivities were attended by Majors Dieudonné and Philippine Tsilulu, The Salvation Army’s regional leaders in Mali, responsible for the new ministry. More than 365 Salvationists and friends participated throughout the weekend.

Separate rallies for men and women took place on Saturday morning. At an afternoon youth concert, participants felt the presence of the Lord, expressing their joy through singing and dancing.

Sunday began with a march of witness on the streets of Ouagadougou, during which the Africa zonal leaders took the salute. Hundreds then gathered at Ouagadougou Corps to celebrate the official commencement of Salvation Army ministry in Burkina Faso. A representative of the Mayor of Arrondissement VII was present, together with traditional community leaders, all happy to see The Salvation Army at work in their community. 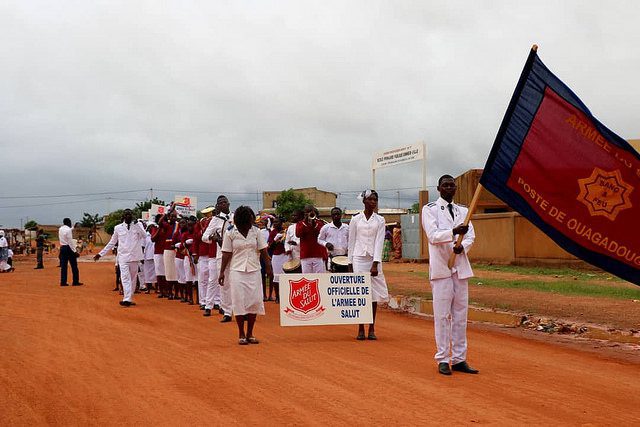 During the meeting, 28 new Burkinabé recruits were enrolled as soldiers. Benjamin Mnyampi urged the continent’s newest Salvationists to “put on the full armor of God” (Eph. 6:11), in order to spiritually “stand firm.”

A letter from General Brian Peddle, read aloud in full, reinforced this message. The General called the Salvationists of Burkina Faso to “work hard—because there is a lot to do: people need to hear the good news of Jesus Christ; lives and communities must be transformed, and real needs must be met.” His message implored listeners to “lay their foundation firmly on Jesus Christ and to be rooted in him.”

A new Salvation Army flag was presented to Captains André and Nana Togo, officers from neighboring Mali who have been appointed officers-in-charge in Burkina Faso. Ouagadougou’s corps band provided the music, and the singing and dancing were bolstered by 68 Salvationists visiting from Mali.

In his Bible message based on Matthew 28:18-20, Benjamin Mnyampi reminded listeners that Jesus has all the power and authority, and therefore they should “go and make disciples of all nations.” Thirty-seven people responded to God’s call, moving forward to the mercy seat.

Following other recent openings in Gabon and Samoa, The Salvation Army is now officially at work in 131 countries worldwide.