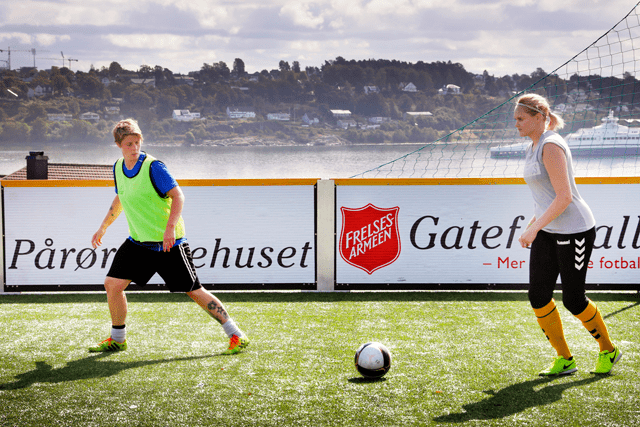 Seventy-two soccer teams will converge in Oslo, Norway, next week as the 15th Homeless World Cup gets underway in the Norwegian capital. The Salvation Army, along with hosting the this year’s event as the official partner in Norway, is also responsible for Norway’s national team.

Twenty-four women’s teams and 48 men’s and coed teams have been invited to compete. With over 500 players representing more than 50 countries from Argentina to Zimbabwe, this Homeless World Cup tournament will be the biggest and most ambitious one to date.

Oslo Mayor Marianne Borgen invited 1,200 players, coaches, staff and volunteers to a reception in Oslo City Hall the night before the tournament. The opening ceremony will be a royal occasion, as Her Royal Highness Crown Princess Mette-Marit will formally commence proceedings at the city’s iconic Rådhusplassen on August 29.

The Salvation Army in Norway has been using football (soccer) to reach out to different groups for more than 30 years. In 2005, The Salvation Army’s Gatefotball (Street Soccer) was officially established. Since then the initiative has expanded into many cities across the country, including an annual Norwegian Street Football Cup. Gatefotball focuses on drug rehabilitation for men and women through sport.

Year-round street football programs take place around the globe, and the national partners use these events to select players to represent their country at the Homeless World Cup tournament.

The Homeless World Cup Foundation works with a network of organizations representing 74 nations. These partners vary in size and structure but they all have one thing in common: they all use the power of football to help people who are homeless and socially disadvantaged.

Demonstrating the internationalism of the event, 28 Salvation Army officers from around the world will join forces with personnel from the host territory to assist the visiting teams. They will also staff a tournament church and prayer room within the arena. Their prayer is that the Oslo 2017 Homeless World Cup has a positive impact on both participants’ and spectators’ lives.

In addition to inspiring change in participants’ lives, The Homeless World Cup aspires to challenge public perceptions of homelessness and the issues that surround it. By showing the human side of homelessness, The Salvation Army and national partners aim to promote a more compassionate approach to helping those affected by it.

The opening game of the Oslo 2017 tournament will be played August 29 at 3:30 p.m., when the Norwegian women’s team faces Chile. The commencement of the men’s tournament follows, with Norway versus Brazil.

Tournament mascots—polar bears known as Catherine and William—will watch the games with the Crown Princess, the Mayor, the Minister of Health and Care Services Bent Høie, Commissioner William Cochrane, Territorial Commander of The Salvation Army in Norway, Iceland and the Færoes, along with guests, sponsors, players and supporters.

The finals of the tournament will take place September 5. Matches will be live-streamed at homelessworldcup.org.